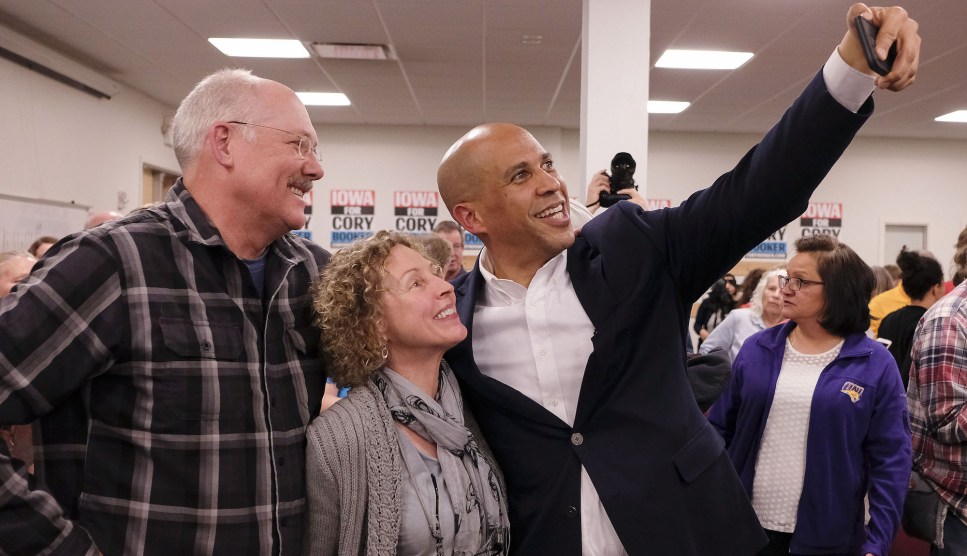 Before announcing his 2020 campaign, Sen. Cory Booker (D-N.J.) had steadily shifted his position on a policy issue that is becoming a hot topic in the Democratic primary. When he was first starting in politics, the Stanford graduate was seen as one of Silicon Valley’s strongest allies in the Democratic Party, a politician prone to heralding the techno-utopian potential of companies such as Facebook, whose CEO, Mark Zuckerberg, donated $100 million to Newark schools during Booker’s time as mayor.

But over his years in the Senate, as Booker geared up to run for president, he slowly changed tune, becoming a relatively under-the-radar ally of progressives seeking to break up Big Tech. In 2017, Booker took on tech directly, saying the US government “absolutely should take a look at Google” for anti-trust violations. He continued to earn a spot in a class of what progressives hailed as the “New Trustbusters,” by introducing legislation to put a halt to Big Ag monopolization and speaking at Open Markets, the premiere anti-trust think tank. Booker also co-sponsored legislation by 2020 candidate Sen. Amy Klobuchar that would update anti-trust enforcement. Last month, Booker explicitly took on tech giants Amazon, Facebook, and Google for “becoming engines for discrimination, harassment, misinformation, and extremism while stifling innovation.”

“We need to use every antitrust remedy—including breaking up firms—to protect consumers, competition and our democracy,” Booker added, gaining praise from anti-trust champions.

After a call from Facebook co-founder Chris Hughes to break up the company last week, Booker was asked by ABC News if he supported the plan. To the ire of some antitrust advocates, Booker did not address the issue of Facebook. “I don’t care if it’s Facebook, the pharma industry, even the agricultural industry. We’ve had a problem in America with corporate consolidation that is having really ill effects,” Booker said. “We need a president that’s going to enforce antitrust laws.”

“So, should they be broken up?” ABC News’ Jonathan Karl asked.

“If I’m president of the United States, I will have a Justice Department that uses antitrust legislation to do the proper investigations and to hold industries accountable for corporate consolidation,” Booker said. “I don’t think a president should be running around, pointing at companies and…breaking them up without any kind of process…That sounds more like a Donald Trump thing to say,”

Cory Booker spoke out against Google, Facebook, and Amazon in 2017, when it was tough to do. And he has real policy ideas here. But equating a call to break up Facebook as a "Trump thing to say" is ugly and disingenuous. https://t.co/p0nnD1lrQr

And proposes to talk about monopolization in American industry without using company names.

You are concerned about the Instagram-Facebook merger? Fine. Just don't use the I or the F words. https://t.co/u35hsCwnUa

The incident speaks to a potential problem that has been looming over the Booker campaign: lingering distrust over his friendly relationship with Silicon Valley.

As a Stanford graduate, Booker has strong ties with the region’s tech industry. According to Open Secrets, since he was elected to the Senate in 2013, Booker has raked in nearly half a million dollars in total donations from individuals in the internet industry. Zuckerberg contributed nearly $50,000 to Booker between 2014 and 2018. Booker has rejected any corporate PAC money, but a super-PAC set up by former classmate Steve Phillips has already been aggressively courting Silicon Valley donors for Booker’s 2020 campaign, though it’s unclear how much it has raised.

Most notably in 2010, as mayor of Newark, Booker accepted a $100 million donation from Zuckerberg to improve Newark’s failing schools, launching a relationship between the two. At a 2012 TechCrunch Disrupt panel, he called Zuckerberg “an American hero.” Booker was at the conference to promote his own startup, a Pinterest-meets-video-chat service called Waywire. The company counted LinkedIn co-founder Reid Hoffman and Google’s Eric Schmidt as investors. (Hoffman has since donated to Booker’s 2020 campaign.) According to a Senate finance disclosure, Booker’s stake in the company as co-founder and board member was worth between $1 and $5 million. Booker gave up his shares in Waywire to charity after winning the Democratic primary for his Senate seat, and the company was sold in 2013. Once used by Booker to encourage his constituents to send him videos, the company ceased operations as of 2017.

Booker’s use of Zuckerberg’s investment in Newark schools similarly flopped. While almost half the money went to teachers’ contracts, the rest went to a mix of charter schools and management consultants. Specifics of the project were kept from parents and students, and in 2012 the ACLU sued the city to get emails about the donations released. Ultimately, the impact of reforms was mixed and the use of the money has been criticized by local reformers and current Newark Mayor Ras Baraka.

Once seen as the “the senator of Silicon Valley,” and before then the “mayor of Twitter” for his extensive use of social media, Booker was the epitome of both the rise of political social influencers and a tech-friendly Democratic Party. But Booker, like many Americans, has apparently grown more wary of Facebook. In April 2018, when Congress called Zuckerberg in to testify about Facebook’s privacy practices after it was revealed that political data firm Cambridge Analytica had used the personal data of millions of users without their consent, Booker was the first member of Congress at the hearing to pointedly ask Zuckerberg about Facebook’s issues with advertising discrimination and hate speech. More recently, Booker co-sponsored legislation that would require companies, including Facebook, to assess their use of automated decision systems to evaluate their “impacts on accuracy, fairness, bias, discrimination, privacy, and security.”

While Booker is one of the few candidates to act on the discriminatory potential of artificial intelligence, his legislation hasn’t drummed up much excitement for his campaign among AI critics. “Talking about bias, transparency, and accountability means actually talking about structural issues with government, and those are more uncomfortable conversations that implicate stakeholders like lobbyists,” says Rashida Richardson, director of policy research at AI Now, a research center that explores the social implications of artificial intelligence. “I wouldn’t even say he has a tech policy agenda.”
Booker’s relationship with Facebook can also seem a mixed bag. “These are popular companies. They seem like they’re doing really cool things. Until the election and Cambridge Analytica, most people weren’t aware of what these companies were doing,” says Matt Stoller, a fellow at the Open Markets Institute. “And I think for me, and I think for most people, it’s okay to learn.”
While Stoller says that Open Markets, which advocates for the break up of big tech companies, is “obviously more aggressive” than Booker, the senator’s record of taking on monopolies in other industries shouldn’t be discredited.
Even as Booker attempts to position himself as a strong tech critic, shirking all influence from the industry might prove impossible. Vox reported that later this month that Hoffman, the LinkedIn co-founder and a Democratic megadonor, is hosting a private fundraiser for Booker in Silicon Valley. In 2018, Hoffman was embroiled in scandal after the New York Times reported that his money had been used to fund a Russia-style disinformation campaign to bolster Democrat Doug Jones in the 2017 Alabama special election. Hoffman claimed he had no knowledge of the project before the Times broke the story, and he condemned the use of any false or misleading information in campaigning.