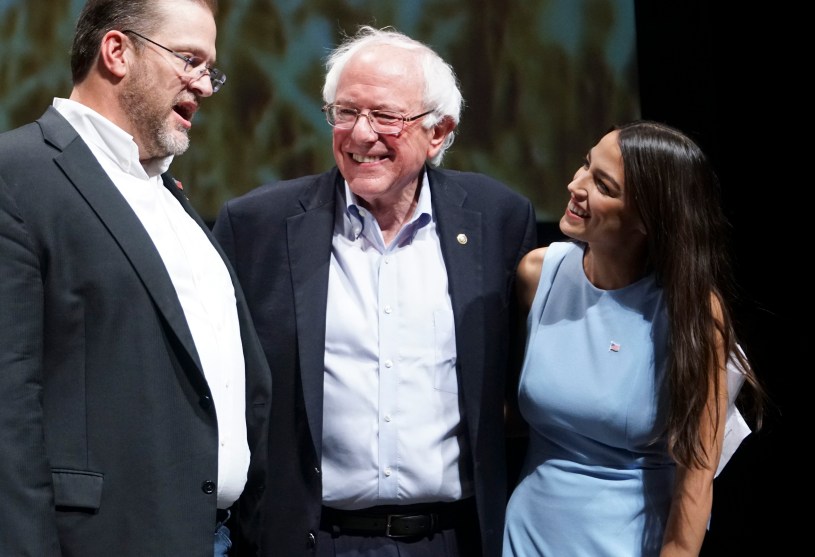 Democratic presidential candidate Sen. Bernie Sanders and Rep. Alexandria Ocasio-Cortez (D-N.Y.) announced a plan on Thursday to introduce legislation that would cap interest rates on consumer lending, including credit cards and payday loans, at 15 percent. Their initiative sets up what could be a bitter fight with the banking and financial services industries, which last year brought in more than $113 billion from credit card fees and interest charged to consumers at average rates that far exceed their proposed cap.

“Today’s loan sharks wear expensive suits and work on Wall Street, where they make hundreds of millions of dollars in total compensation by charging sky-high fees and usurious interest rates,” Sanders and Ocasio-Cortez argued in a statement released ahead of their announcement.

“Extortionary interest rates are wrong… we gotta do something about it.”

The pair also criticized banks for charging an average interest rate on credit card balances that exceeds 17 percent, while they borrow money from the Federal Reserve at just 2.5 percent. The lawmakers’ so-called Loan Shark Prevention Act would allow individual states to establish their own even lower credit card interest caps, and to impose penalties on violating firms.

“There is no reason a person should pay more than 15% interest in the United States. It’s common sense—in fact, we had these Usury laws until the 70s,” Rep. Ocasio-Cortez wrote on Twitter. “It’s a debt trap for working people [and] it has to end.”

There is no reason a person should pay more than 15% interest in the United States.

It’s common sense – in fact, we had these Usury laws until the 70s.

(Max interest rates are record-high for ppl with excellent credit, too.)

If enacted, the bill would force a significant reduction in current credit card interest rates; the average maximum rate charged by the card companies is currently almost 25 percent, while the overall average is inching closer to 18 percent. It would also force a total transformation of the payday loan industry, which makes small emergency loans at exorbitant rates: the average interest rate on such loans is almost 400 percent. The federal financial industry watchdog, the Consumer Financial Protection Bureau, recently rolled back Obama-era restrictions on payday lenders.

The bill has little chance of becoming law soon, especially given Republican control of the Senate and White House. But Ocasio-Cortez ended the press conference on an optimistic note by suggesting their bill could move the political needle on both sides of the aisle.

“What I love about big and ambitious ideas, whether it’s this or the Green New Deal, is it forces the Republicans to change their agenda,” Ocasio-Cortez boasted, pointing to the robust climate legislation she’s sponsored and crediting it for prodding Senate Majority Leader Mitch McConnell to acknowledge the existence of man-made climate change last month. “Now we’re going to get Republicans on the record saying that extortionary interest rates are wrong and that we gotta do something about it.”