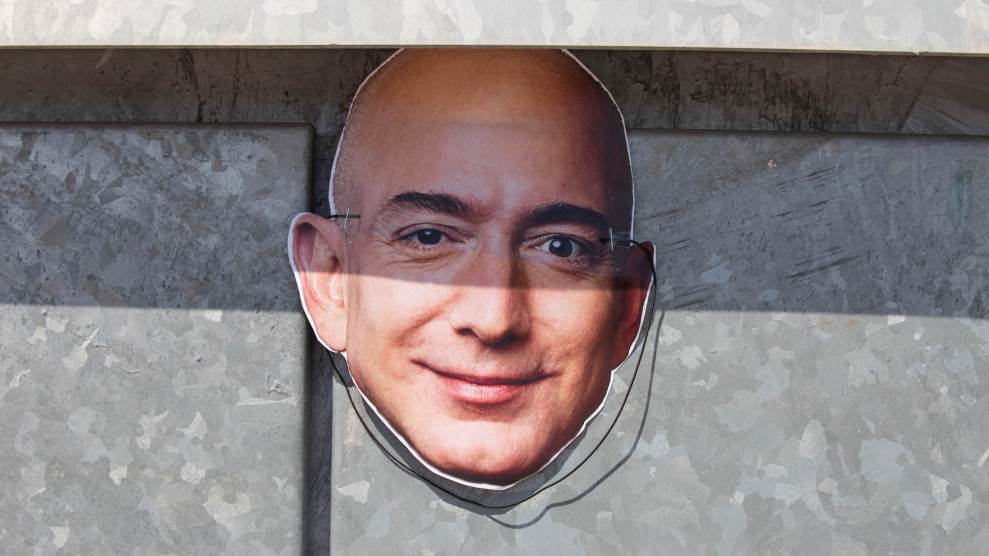 The company would have to voluntarily accept the proposals' conditions of the proposals, but a win could still spur lawmakers to get involved.Lito Lizana/SOPA Images via Zuma

On Wednesday, Amazon stock owners will have the chance to rein in the company’s controversial facial recognition software. Two shareholder resolutions, which were filed in December, emphasize concerns voiced by dozens of civil rights groups—and some of Amazon’s own employees—about oversight of a technology that they worry will lead to racial profiling and other civil rights violations.

The first resolution to be presented at the company’s annual meeting demands that Amazon halt sales of its so-called Rekognition product unless the company’s board “concludes the technology does not pose actual or potential civil and human rights risk.” The second resolution calls for the company to commission an independent study of the software’s threats to privacy and civil rights, dangers that civil rights advocates already say are well established.

“Without shareholder action, Amazon may soon become known more for its role in facilitating pervasive government surveillance than for its consumer retail operations,” the ACLU wrote on Monday in an open letter to shareholders. “But more than that, aggressive marketing of face surveillance technology to law enforcement presents an unprecedented threat to our civil liberties and privacy, and it is incompatible with a healthy democracy.”

Amazon’s facial recognition software first came under national scrutiny last summer when an ACLU study found that it incorrectly matched 28 members of Congress with individuals who had been arrested for a crime. Amazon contested the watchdog’s findings, saying the researchers had not set a high-enough “confidence threshold” (a statistical measure determining a match), telling the media that it recommended a 95 percent confidence threshold. (In a later blog post, the company updated that number to 99 percent.)

In the year since, reporters and civil rights watchdogs have found there is limited oversight of how police use the technology. Just last month, the Washington Post found that Oregon police were provided with matches from the program even when the matches were beneath the 99 percent certainty that Amazon’s own guidelines recommend.

“Amazon [says] that ‘If one of our customers is using the technology to violate civil rights or civil liberties, we are going to pull their access to the technology.’ But the problem with that is many of the government-side consumers of the technology acquire and use the technology in secret,” says Jevan Hutson, a tech-policy advocate and student at the University of Washington School of Law.

Last year, BuzzFeed News found that Amazon gave the city of Orlando, Florida, use of the technology for free, but a nondisclosure agreement shielded the deal from public inquiries, allowing the city to rapidly expand its video surveillance of citizens with little debate. The technology has also been pitched to federal agencies, including ICE.

“Amazon has said one thing about the rules that it has for the system, but then tells the customers that they don’t have to abide by those rules,” says Hutson.

Last month, Amazon turned to the Securities and Exchange Commission in a failed appeal to block the resolutions from being considered at the meeting. While the votes will proceed, they will not be binding. The company would have to voluntarily accept the proposals’ conditions, but a win could still spur lawmakers to get involved.

“It sends the signal that even Amazon’s own shareholders are wary of the company’s behavior, which may, in turn, impact public pressure for elected officials to create legislation regulating police use of face recognition technology,” Jameson Spivack, a researcher at the Center on Privacy and Technology at Georgetown, wrote in an email to Mother Jones. “Already we are seeing state and local lawmakers considering bills to regulate and even prohibit this use of the technology.”

Last week, San Francisco placed a ban on government use of facial recognition technology, and similar initiatives are being considered in Oakland, California, and Somerville, Massachusetts. A number of states have also considered regulating the technology in the past year, including Washington, though that measure fell apart. Wednesday will also mark the first House Oversight Committee hearing on the use of facial recognition by government and commercial agencies and the need for oversight of the technology’s use on civilians.