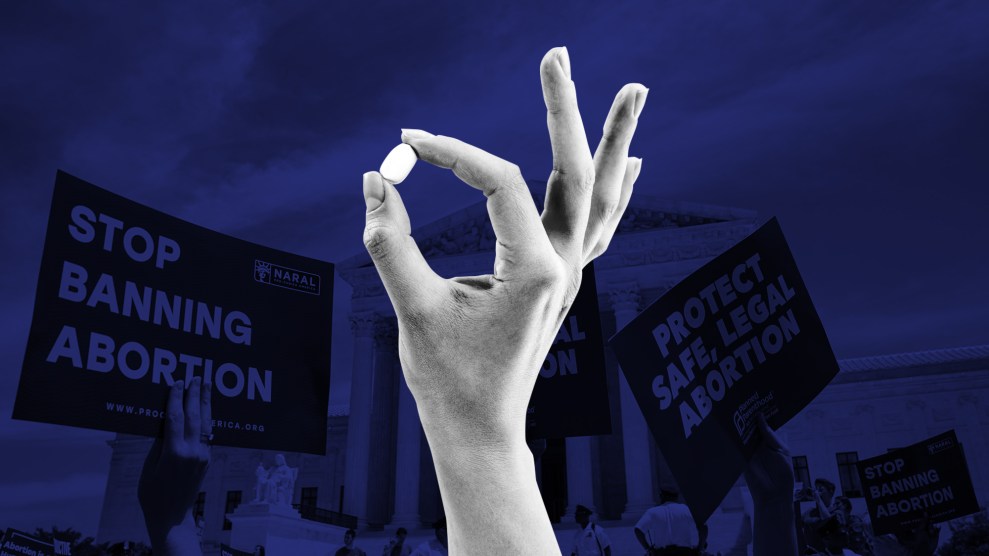 “The good news is you are no longer pregnant,” Julie Jenkins, a nurse practitioner at the Maine Family Planning clinic in Belfast, told her patient one day last spring. The woman in Exam Room 2 had received a medication abortion a week earlier and was back for a follow-up to make sure everything had gone as planned. As Jenkins studied the screen of the ultrasound machine, she knew the patient wasn’t quite in the clear. “It does look like there is some blood and clotting in the uterus, or it could be a gestational sac.” The abortion was incomplete, and Kaitlyn (whose name has been changed to protect her privacy) would likely need to take another round of misoprostol, one of the two abortion pills prescribed to end pregnancies in the first few months.

Jenkins, a petite 46-year-old with wavy brown hair and bright blue eyes, was familiar with such complications. As a nurse practitioner, Jenkins is what’s known as an advanced practice clinician, a highly trained class of medical providers embraced in the 1990s to make up for shortages of doctors. A women’s health provider of 25 years, Jenkins performed abortions when she lived in California years ago, so she knew what to look for on the ultrasound and what to do if the patient needed additional treatment. But in Maine, nurses are prohibited from performing abortions. Even though Jenkins believed Kaitlyn needed another prescription to finish the abortion, Jenkins would need approval from a doctor before helping Kaitlyn further. And Maine Family Planning’s Belfast clinic does not employ a doctor who performs abortions. Kaitlyn had gone through the state’s telehealth program to get her prescription.

Back in her office, Jenkins called MFP’s headquarters in Augusta, where a doctor provides abortion care on-site to get approval for the new prescription. The doctor was currently with a patient, so Jenkins left a message. Kaitlyn would have to wait.

After the Supreme Court’s 1973 Roe v. Wade decision, every state, with the exception of Vermont, banned anyone except physicians from performing abortions. The restrictions were seen as necessary to edge out “back-alley” providers. But two medical advances over the 46 years since the ruling have made abortion both safer to get and easier to provide. The first was aspiration abortion, a procedure popularized in the ’70s that uses suction—as opposed to scraping, or “curettage”—to pull the pregnancy out of the uterus. The second was the development of the medication abortion method, a two-pill protocol that terminates early pregnancies and simply flushes the menses out of the body.

Together, medication and aspiration abortions, which are only performed in the first 10 or 16 weeks of pregnancy, respectively, make up the vast majority of terminations every year and have a serious complication rate of less than half of one percent. They’re also not exceptionally complicated to perform. “Most everything I do is more complicated than medication abortion,” Jenkins told me. “The fact that I was able to perform that work in California and am not able to perform it here seems so arbitrary.”

Currently, 33 states, including Maine, still require that a physician perform medication abortions, and 42 states, also including Maine, bar lower-level providers from offering aspiration abortions. But reproductive rights activists in many of these states are beginning to fight back against the laws. In 2017, Jenkins sued the state, with the backing of the ACLU, Planned Parenthood, and Maine Family Planning, to overturn the law. Last week, the Maine legislature passed a bill to repeal the state’s physician-only abortion law and allow mid-level providers like Jenkins to perform medication and aspiration procedures. (The suit will likely be dropped as a result of the legislation.) This spring, courts in Montana and Virginia paved the way for advanced practice clinicians to perform abortions. A women’s advocacy group in Minnesota filed a lawsuit challenging all of the state’s abortion restrictions, including its physician-only law, on Wednesday. In the last year, lawsuits challenging physician-only statutes have been filed in seven other states.

This year alone, five states have passed bills banning abortion at six or eight weeks of pregnancy, and Alabama has attempted to ban abortion almost entirely. At a time when abortion rights are under attack, the challenges to physician-only laws are one of reproductive rights activists’ only proactive strategies for expanding abortion access. “Bans on the ability of qualified clinicians to care for their patients severely diminish the availability of abortion services across the country,” said Julia Kaye, a staff attorney at the ACLU’s Reproductive Freedom Project. “These are qualified health care professionals whose ability to utilize their skills and training and serve their patients is being blocked by politics.”

If the push to repeal physician-only laws is successful, it could transform access to abortion across the country. Take Maine. The state has three clinics where physicians provide abortions onsite. Abortions are offered once a week at each location. Seventeen other clinics offer medication abortions once a week through telemedicine; physicians elsewhere in the state evaluate patients and prescribe medication via videoconference. For an aspiration abortion, which must be performed in a clinic with a physician, women regularly travel hundreds of miles for their appointments, which are often scheduled two or three weeks in advance.

It’s not just a Maine problem. Ninety percent of counties in the United States don’t have an abortion provider, and 39 percent of women between 15 and 44 years old live in those counties. As the physicians who founded clinics in the 1970s get older, fewer medical school residencies offer abortion training. There are so few abortion doctors that those who do provide the service often work at multiple clinics in a region, flying between cities each week to ensure access to services.

Allowing mid-level providers to perform terminations could make up for the shortage of physicians providing the service nationwide, advocates say. In Maine, patients would theoretically be able to access abortion care six days a week at the clinic closest to them. Clinics could offer evening and weekend hours. The number of clinics where aspiration abortion is available would increase from three to 18, according to Maine Family Planning and Planned Parenthood.

“No matter where they live, every woman has the right to safely make her own health decisions, control her own future, and get care from the provider of her choice,” said Maine House Speaker Sara Gideon, the sponsor of the bill repealing the physician-only law. “If we increase the number of providers in Maine, then we are making real gains towards equitable access to health care for all women who need an abortion.”

One of those women is Tanja Hollander, who in 2017 made the two hour drive to a clinic in New Hampshire from her home in Auburn, Maine, to get the earliest available appointment. Hollander, an artist, was working on a solo exhibition at the Massachusetts Museum of Contemporary Art, a landmark achievement in her career, when she discovered she was pregnant. Planned Parenthood in Portland, a 45-minute drive from Auburn, didn’t have availability for three weeks. Advanced practice clinicians in New Hampshire, meanwhile, are allowed to perform abortions. So Hollander called every clinic in the region until she found one with an appointment a few days away. A nurse practitioner provided her abortion.

Kaye, one of the ACLU lawyers arguing for the repeal of physician-only laws, said the obstacles created by such laws for women like Hollander make them illegal. Kaye pointed to the Supreme Court’s 2016 Whole Woman’s Health ruling, which found that a Texas law chopping the number of abortion providers in half created an “undue burden” on women seeking abortion and was therefore unconstitutional. The 2016 decision prompted the ACLU, Planned Parenthood, and the Center for Reproductive Rights to sue Maine. “Given the overwhelming evidence that APCs can safely provide this care, and the burdens that these kinds of bans impose on patient access, [physician-only] laws simply cannot survive the Whole Woman’s Health standard,” said Kaye.

When the ACLU filed its lawsuit in Maine, Republican Gov. Paul LePage was vocally opposed to abortion rights, and Republicans held a majority in the state senate. A 2018 bill to remove the statute went nowhere. That changed in November, when Janet Mills, a pro-choice Democrat who backed the bill, was elected governor and Democrats gained control of the legislature for the first time in 10 years. In March, Rep. Gideon introduced the new bill with backing from Gov. Mills, four days before oral arguments in the case were scheduled. The bill passed the state House and Senate last week, and after making it through a procedural vote on Wednesday, is headed to the governor’s desk for a signature.* The move makes Maine the third state in the country to repeal its physician-only statute through legislation. The lawsuit is likely irrelevant, but Jenkins says she’s been invited to the bill’s signing ceremony.

“Against the backdrop of outright bans, we as a movement have to be standing up for people who have the least agency to access abortion,” says Nicole Clegg, vice president of public policy at Planned Parenthood of Northern New England. “We cannot cede ground to people who are determined to make abortion illegal. We have to continue to push forward.”

Sara Gideon, meanwhile, is considering whether to challenge Susan Collins, the longtime Maine senator and supporter of abortion rights, in 2020. Collins received backlash last fall after voting to send Brett Kavanaugh to the Supreme Court.

An hour after Jenkins finished Kaitlyn’s ultrasound, the doctor still hadn’t called back to consult on whether to give her more misoprostol. Jenkins popped out to see another patient for a birth control refill and missed the doctor’s call. Jenkins called again, but the doctor had already gone in to see the next patient. Jenkins seemed frustrated with the game of phone tag as she fidgeted in her chair. Kaitlyn’s appointment had started at 11:30 a.m. and it was now approaching 1 p.m. “[The doctor] was out and I was in and now I’m out and she is in,” Jenkins said. “This patient is spending more time waiting on the doctor than the actual patient visit.”

At last, the phone rang and Jenkins grabbed it. She described what she saw on the ultrasound to the doctor and why she thought another round of misoprostol was the right course. She paused, said thank you, and hung up to go hand the pills to the patient.

Correction: An earlier version of this article incorrectly state that the bill had been signed by Gov. Mills. A signature is still expected.