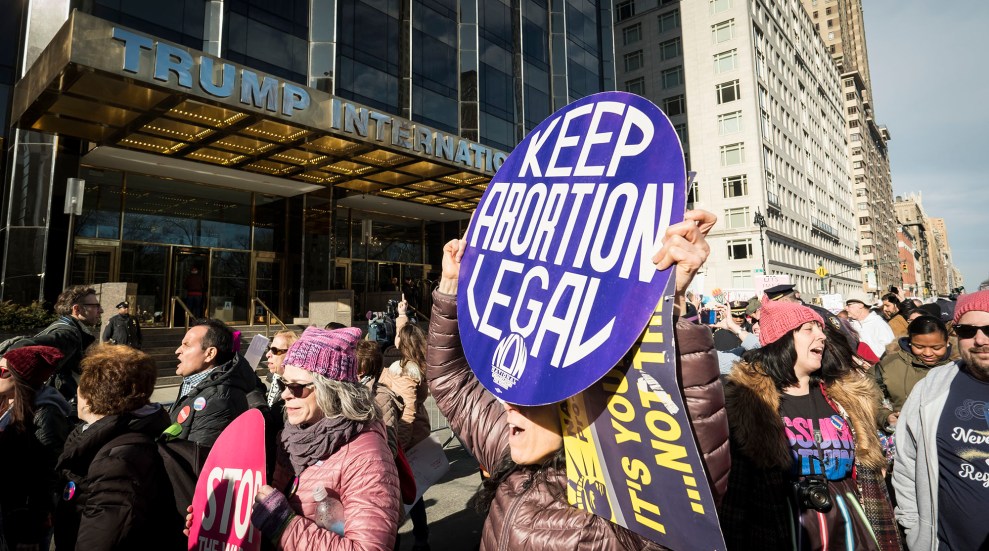 Rebecca Gomperts has for decades helped women terminate their pregnancies in parts of the world with abortion bans, like Poland and Portugal. A medical doctor from the Netherlands, she began in the 1990s by using a Dutch ship, anchored in international waters, to give abortions to women on board while avoiding local laws. Now her process involves simply mailing the abortion pills, mifepristone and misoprostol, to women who contact her. But she has still had to go to some lengths to make access possible: In 2016, she sent a drone carrying the abortion pills into Northern Ireland.

Last year, Gomperts announced she’d created a new organization, Aid Access, to help women in places like the United States, where abortion is not illegal but is highly restricted. Five months later, in March, the Food and Drug Administration notified her that Aid Access is violating federal law by selling “misbranded and unapproved new drugs.”

Now, amid a growing number of states passing laws to effectively outlaw abortion, Gomperts says she won’t back down, despite the warning letter. “I will not be deterred. When women in the U.S. seeking to terminate their pregnancies prior to 9 weeks consult me, I will not turn them away,” she wrote on the Aid Access website. “I will continue to protect the human and constitutional rights of my patients to access safe abortion services.”

“The harder states clamp down on rights, the more they will turn to Rebecca and others.”

Two days after the FDA letter was sent, 120 members of Congress wrote to FDA Commissioner Norman Sharpless thanking him for taking action. Gomperts briefly paused operations. But on Thursday, a day after Alabama became the first state to pass a near-total abortion ban and about a week following Georgia’s “fetal heartbeat” ban, her lawyer, Richard Hearn, responded to the FDA, saying that its attempt to stop Gomperts “violates the constitutional rights of Dr. Gomperts’ patients in the U.S.” to receive abortion care.

The FDA’s letter, though not a lawsuit, signals what could be a growing trend: As states restrict access to in-clinic abortions, alternative suppliers of abortion drugs are cropping up and, in turn, being targeted. Last June, FDA agents raided the home of a New York City woman who had sent abortion medications to 2,000 women across the country starting in 2016 (no charges appear to have been filed). But unlike in the pre–Roe v. Wade era, when women sought out doctors or other practitioners to end pregnancies, the abortion pills mifepristone and misoprostol, which are safe and, thanks to the internet, abundant, make terminating without complications relatively easy. Not only that: Medication abortions are indistinguishable from miscarriages, so that means they are also discrete. Whether law enforcement and the FDA can stop the flow of pills, and whether they have jurisdiction to do so, remains to be seen.

“The advent of these medicines, and the web, make these state restrictions like prohibition alcohol,” Hearn tells Mother Jones. “They are going to be unenforceable. The harder states clamp down on rights, the more they will turn to Rebecca and others.”

In a phone call with Mother Jones, Gomperts says she thinks the congressional letter to the FDA made it clear that there is political pressure on the agency to do something. “I’ve been doing this for 16 years. This is the first time we’ve ever gotten a letter like this. It’s a bullying strategy.”

“I’ve been doing this for 16 years. This is the first time we’ve ever gotten a letter like this. It’s a bullying strategy.”

Hearn’s response to the FDA also argues that the agency has no jurisdiction over Gomperts, and that misoprostol and mifepristone, both of which are approved by the FDA, are not “misbranded and unapproved.” Hearn notes the FDA has never gone after an individual doctor (as opposed to a drug manufacturer), let alone a doctor practicing outside of the United States.

Hearn, who is working with Gomperts pro bono, has experience battling abortion restrictions. In 2011 he defended Jennie Linn McCormack, a mother of three from Idaho who was charged with a felony for using pills she’d bought online to end her five-month pregnancy at home. After getting the charges dismissed, Hearn helped McCormack file a suit to overturn the state law making it illegal for a woman to end her own pregnancy as well as three others, including one banning abortion after 20 weeks. When the state argued McCormack didn’t have standing because she was no longer pregnant, Hearn, who also has a medical license, argued he had standing as a doctor and added himself as a defendant in the case. In May 2015, the 9th Circuit Court of Appeals overturned all four laws.

Gomperts’ case, says Hearn, is another way to potentially intervene in the flurry of anti-abortion bills that have passed this year. The Alabama law that passed last week, in addition to banning abortion in almost every case, sets a penalty of 99 years for doctors who perform them. Others, in Missouri, Georgia, and Ohio, outlaw abortion after six and eight weeks. “I see Rebecca as our strongest defense against legislative attacks,” Hearn tells Mother Jones. “Just think of what a doctor is going to do in one of the states making abortion a felony. He or she is not going to risk it. But he could just say, ‘Just find Aid Access.’ That’s perfectly legal.”

Perhaps the most powerful evidence of the importance and impact of Gomperts’ work, within the real-life context of the limitations on access to abortion, can be seen in the emails she receives from some of her clients. “I live in Georgia which passed a 6-week abortion ban in the House & Senate the week after I was able to get help through AidAccess,” one client wrote to Gomperts after her abortion. “Thank you so much for the work that you do.”

Another client wrote her:

“Before accessing this service, I had performed an abortion myself at home by using large gauge crochet hooks to dilate my cervix a bit and then attaching plastic tubing to a syringe and suctioning the fetal/pregnancy tissue. I was very nervous to do this and although I successfully ended the pregnancy, I also got a small tear on my cervix that would not stop bleeding. I was able to see a doctor and they cauterized the spot and it was fine, but the entire process was dangerous and stressful. I am educated and upper-middle class. I could not travel for an abortion because I am the primary caregiver of a special-needs child. Having this service available allowed me to terminate my pregnancy safely, effectively, and with discretion.”

And a third said:

“I was extremely scared it wasn’t going to work, and that idea frightened me so much because I have a very religious family who would probably shun me if they found out what happened. I also live in the Bible Belt where the topic of abortion has been discussed heavily this past month, which put me even more on edge about the entire situation..Even though I’ve always wanted children, making this decision was easy…There’s no way I could have gotten to the local clinic. Abortions are only available on a few days a week, and they’re always at times I work. I also don’t drive, so discreetly visiting the clinic wasn’t an option. There are also regular protests outside the clinic.”

Hearn says it’s hard to tell what the response, if any, will be from the FDA. But as long as Gomperts keeps hearing stories like these, dozens of which were appended to their letter to the FDA, she will remain focused on the work. “It’s so moving and heartbreaking,” she says. “How can you stop when you get emails like that? That’s all that matters. These are people that are trying to survive, that are being targeted.”