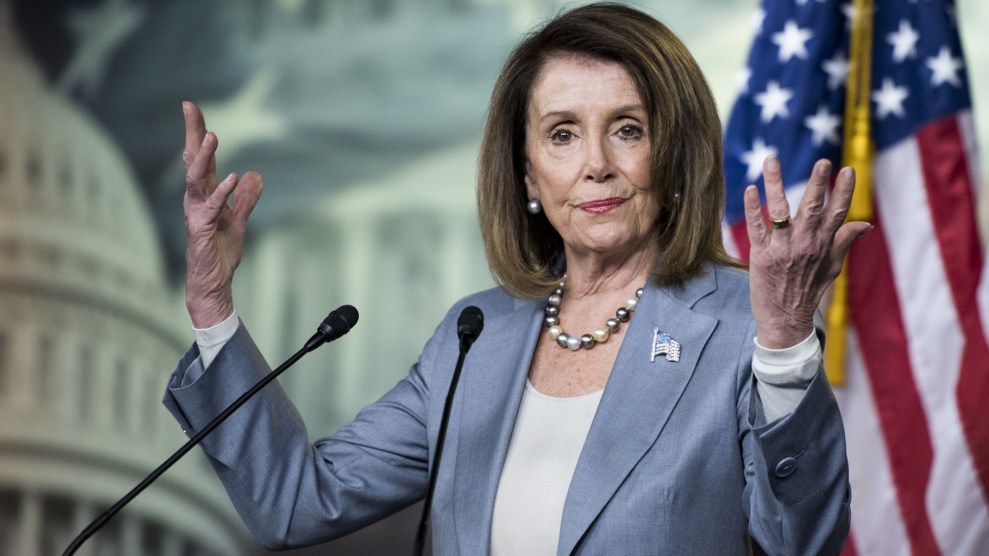 In her weekly press conference in the Capitol on May 9, House Speaker Nancy Pelosi (D-Calif.) said the United States was in a "constitutional crisis."Bill Clark/Congressional Quarterly/Newscom via ZUMA

“We are now in a constitutional crisis,” House Judiciary Committee Chairman Jerrold Nadler (D-N.Y.) declared last week. His committee had just voted to hold the attorney general in contempt of Congress for failing to comply with a subpoena for the full report by special counsel Robert Mueller. Since taking control of the House of Representatives, Democrats had been using their authority to request documents and testimony from Trump administration officials. In response, Trump has sought to quash or ignore the subpoenas and stop witnesses from testifying. “We’re fighting all the subpoenas,” he told reporters in April.

“If Congress, if the House, allows this to continue without seriously asserting itself in response, it will have significant long-term implications for the balance of power between the branches,” says Josh Chafetz, an expert on separation of powers at Cornell Law School. But the question of what House Democrats can do to assert themselves is tricky.

“The Constitution creates three co-equal branches of government designed to serve as checks and balances on each other,” says Elise Bean, who spent three decades conducting oversight investigations as an attorney under former Sen. Carl Levin (D-Mich.). “But President Trump is challenging that system in a way we‘ve never seen it challenged before.”

Here are the major requests from Congress that Trump is thwarting—and what Democrats can do about it:

What Congress did: The Judiciary and Intelligence committees issued subpoenas against Attorney General William Barr for the full report on May 8.

Why Democrats want it: They say it’s for oversight of the executive branch, to aid in Congress’ duty to write laws, and to protect the country, particularly as pertains to foreign election interference. Of course, they’re also hoping it contains dirt that will embarrass the president or subject him or his allies to legal proceedings.

Trump’s resistance: On the same day that the subpoenas were issued, Trump asserted executive privilege to shield the unredacted report and supporting documents from Congress. He claimed the subpoenas were a politically motivated abuse of power.

What Democrats can do about it: The House Judiciary Committee voted Wednesday to recommend that the House hold Barr in contempt of Congress. Next the full House will vote. After the contempt vote, Congress may file a lawsuit seeking to enforce its subpoenas. The law is likely on its side: Executive privilege is supposed to guard private communications between a president and his advisers, not hide crimes. But a court battle would draw out the process, possibly for the duration of Trump’s first term. “Although [Democrats] may technically win if they go to court—in fact they probably will—it will take so long that it will basically amount to a loss for them,” says Chafetz. (When House Republicans held Attorney General Eric Holder in contempt in 2012 for refusing to turn over documents related to the botched gun-running operation known as Fast and Furious, the ensuing court battle stretched through President Barack Obama’s second term and into the first two years of the Trump administration.)

What Congress did: The House Judiciary Committee subpoenaed McGahn to produce documents and testimony related to the committee’s obstruction of justice investigation against Trump. The subpoena demanded the documents by May 7 and that McGahn testify publicly on May 21.

Why Democrats want it: McGahn was a key witness to Mueller’s investigation into Russian interference in the 2016 election and, critically, whether Trump obstructed justice in trying to thwart Mueller’s probe.

Trump’s resistance: The White House instructed McGahn not to comply with the subpoena, arguing that the White House is the custodian of the requested documents. As for the document request, Trump invoked executive privilege to block McGahn from complying, saying the request needed to be sent to the White House and that McGahn doesn’t have legal right to comply.

What Democrats can do about it: Nadler has threatened to hold McGahn in contempt of Congress if he doesn’t appear to testify. Democrats have also argued that the White House didn’t fill out the official paperwork to assert privilege and that it wouldn’t matter anyway because the White House waived privilege for McGahn when it allowed him to cooperate with Mueller last year. For McGahn to be prosecuted for the crime of contempt of Congress, the Justice Department would have to take that action—a virtual impossibility. House Democrats could file a civil suit, but that could take years to resolve. Technically, Congress has the power to arrest people held in contempt and jail them. But it hasn’t used this power in decades, and the last time it arrested an executive branch official was more than a century ago—although Chafetz, who has written about congressional contempt orders for more than a decade, says the idea of Congress locking people up has recently “moved a little bit closer to being on the table than it was even a couple of years ago.”

What Congress did: The House Oversight and Reform Committee subpoenaed the accounting firm Mazars LLP for years of Trump’s financial records and statements. The House Intelligence and Financial Services committees also issued subpoenas for the president’s financial records from Deutsche Bank, Capital One, JP Morgan Chase, Bank of America, and Citigroup.

Why Democrats want it: They want to determine whether Trump misrepresented his finances and whether his financial entanglements left him vulnerable to foreign influence. The requests to Capital One concern potential conflicts of interest relating to Trump’s Washington, DC, hotel and other business interests.

Trump’s resistance: Trump and his family sued the Oversight Committee, Mazars, Deutsche Bank, and Capital One to prevent them from complying with the subpoenas. A preliminary hearing on the bank suits is scheduled for May 22.

What Democrats can do about it: Democrats are confident they’ll prevail in court. But it may take years to reach a resolution, allowing Trump and his family to escape congressional oversight. The lawsuits are also a direct shot at congressional authority. If they prevail, “then anybody being investigated by Congress could sue in court to invalidate a congressional subpoena seeking their records from a financial institution, and tie up the investigation for years,” says Bean. “Congress has been getting information directly from financial institutions for more than 40 years—ever since the Supreme Court held that clients can’t stop a subpoenaed bank from turning over records to the government.”

Trump’s resistance: The White House instructed Kline not to appear, saying the subpoena “unconstitutionally encroaches on fundamental executive branch interests.” Kline’s lawyer said since Trump is boss (Kline currently works at the Defense Department), he would obey his request.

What Democrats can do about it: Elijah Cummings planned to initiate contempt proceedings against Kline for ignoring the subpoena, but has pulled back because Kline agreed to a transcribed interview with Cummings, with a White House lawyer present. This took place on May 1. Kline refused to comment on how Ivanka Trump and Jared Kushner’s clearances were granted.

What Congress did: The Senate Intelligence Committee, led by Republican Richard Burr of North Carolina, issued a subpoena Wednesday for the president’s son to testify.

Why Democrats want it: Democrats, and possibly Burr, think Trump Jr. lied to congressional investigators about his actions and statements during the 2016 presidential campaign, including contacts with Russians.

Trump’s resistance: President Trump said his son was exonerated by Mueller and was surprised by the subpoena. It is unlikely that Trump Jr. will comply. (The president can’t claim executive privilege for his son because he does not officially work in the White House.)

What Democrats can do about it: As with McGahn, Democrats could hold Trump Jr. in contempt of Congress, but their options then—filing a civil suit, attempting to lock him up, or hoping that the Justice Department decides to prosecute him—aren’t terribly appealing.

What Congress did: The House Committee on Ways and Means requested Trump’s federal income tax returns from 2013 to 2018 from the Treasury Department in early April. On Friday, committee chair Richard Neal issued subpoenas to Treasury Secretary Steve Mnuchin and the IRS commissioner for these returns.

Why Democrats want it: Democrats say they want the returns to assess the effectiveness of the automatic audits that all sitting presidents face, though no one believes that is their main motivation. They also say, more plausibly, that they want to see whether Trump is complying with US tax laws. The fragments of Trump’s tax history that have become public suggest that he’s repeatedly claimed huge business losses to avoid paying taxes.

Trump’s resistance: Mnuchin refused to turn over the president’s tax returns after the committee’s initial request, arguing that Congress lacks a legitimate legislative purpose to obtain them.

What Democrats can do about it: They argue the congressional tax committee has the authority to request any taxpayer’s returns. Neal could file a lawsuit against the Treasury Department if it still refuses to hand over the returns. Any legal action over Trump’s taxes could end up in the Supreme Court. “The law says Treasury shall turn over tax returns when properly requested by Congress,” says Bean. “But this Treasury, at the direction of the president, says it won’t. Requiring Treasury to comply with the law and our constitutional system of checks and balances shouldn’t be a close question for a judge. But we’ll find out.”