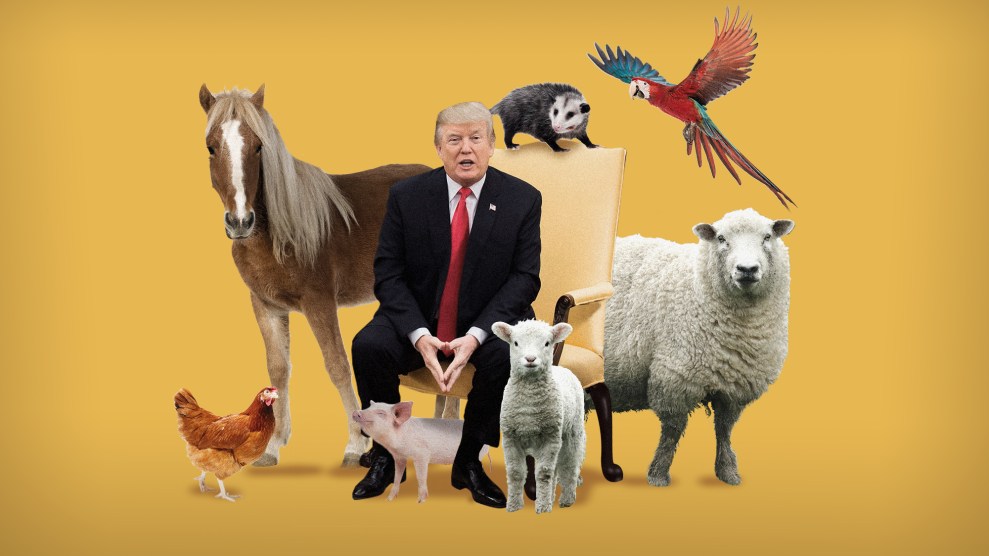 Donald Trump has caught a lot of flak for disliking dogs. The president made his anti-canine sentiment known when he told an El Paso, Texas, crowd that getting a dog would feel “a little phony,” and he has repeatedly called people “dogs” as an insult. Stephen Colbert even listed Trump’s refusal to get a dog as one of the “reasons Trump is a bad president,” right up there with “tried to ban Muslims” and “puts kids in cages.” Trump’s lack of a pet certainly doesn’t make him look caring and tender. But why does his companion have to be a dog?

Sure, it makes sense for politicians to have dogs. Everyone, regardless of political leaning, seems to love them, and every president since William McKinley has had one at one time or another. Dogs are more likely than cats to be comfortable with public appearances, and they make their owners come off as playful and nurturing. Some say dog owners tend to be happier than cat owners, but correlation doesn’t imply causation. Regardless, dogs have become such a fundamental part of the presidential package that several Democratic candidates are already publicizing their pups online. Elizabeth Warren’s golden retriever Bailey owns the Twitter handle @firstdogbailey, and Beto O’Rourke’s Artemis runs @First_Dog_USA.

Bailey snoozed all the way home from New Hampshire – campaigning is tiring work for a dog! Check out his view from Saturday's event in Manchester. pic.twitter.com/OwKxQG0oYv

However, the White House has hosted a number of non-canine animals that could potentially replace the First Dog as American traditions. Benjamin Harrison named his two pet opossums Mr. Reciprocity and Mr. Protection, after the 1896 Republican Party’s trade policies, which aren’t too far off from Trump’s own. Several presidents have had birds, and Woodrow Wilson kept a flock of sheep. Theodore Roosevelt, an unparalleled animal-lover, welcomed a bear, a lizard, guinea pigs, a badger, a pig, a macaw, a hen, a rooster, a hyena, a barn owl, a rabbit, a pony, snakes, and several dogs. Surely, of all the kinds of animals that have lived at 1600 Pennsylvania Avenue, Trump could find one he could get along with.

If all else fails, he could join the ranks of Abraham Lincoln and John F. Kennedy by adopting a cat. If Trump is too busy to take care of a dog, a cat would be a relatively low-maintenance solution. Maybe he could get a siamese cat, like Jimmy Carter’s Misty Malarky Ying Yang, or he could carry it on his shoulder, like Bill Clinton did with Socks. To be fair, Trump doesn’t strike me as a cat person.

To have no pets at all, though, is almost unheard of for a president. The otherwise petless Andrew Johnson fed white mice in the White House, which counts as animal companionship in my book. And Harry Truman briefly owned a cocker spaniel, which he gave to his physician because, according to the Harry S. Truman Presidential Library and Museum, “they preferred to be a pet-free family.” But if Trump steers clear of even mice, he’ll be the first president since James K. Polk to have truly had no animal companionship at all.

But really, Trump’s aversion to animals comes as no surprise. As Purdue University animal ecology professor and director of the Center for the Human-Animal Bond, Alan M. Beck, commented to the New York Times, “His sons are trophy hunters.”