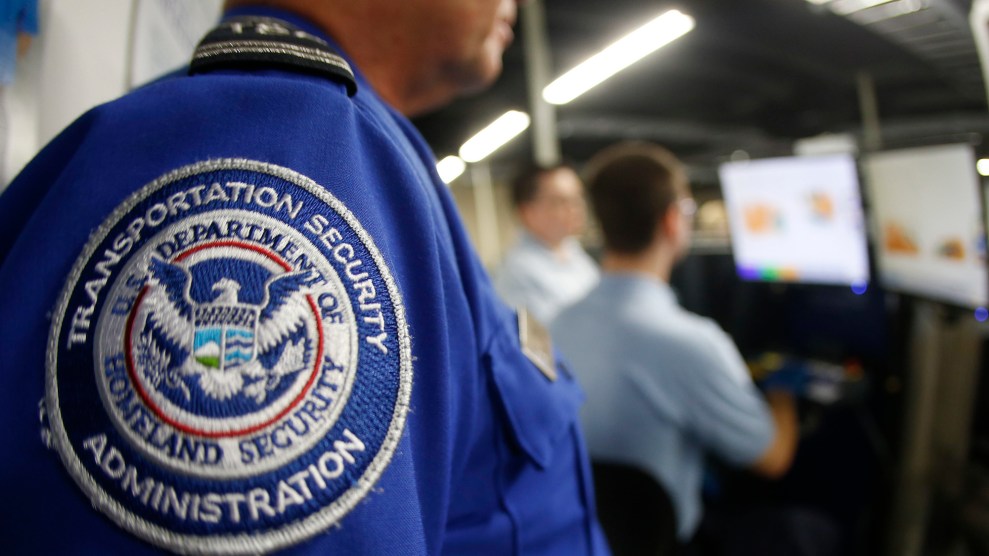 Dorian Wanzer travels frequently for work. And almost every time she steps out of an airport body scanner, security screeners pull her aside and run their fingers through her hair. It’s called a hair pat-down.

“It happens with my natural Afro, when I have braids or two-strand twists. Regardless,” said Wanzer, who lives in Washington, D.C. “At this point in my life I have come to expect it, but that doesn’t make it any less invasive and frustrating.”

Wanzer, who had her hair patted down by Transportation Security Administration officers two weeks ago while she flew home from Raleigh, North Carolina, said she feels singled out when she is asked to step aside.

“When you find yourself in that kind of situation, it makes you wonder,” Wanzer said. “Is this for security, or am I being profiled for my race?”

Black women have been raising alarms for years about being forced to undergo intrusive, degrading searches of their hair at airport security checkpoints. After a complaint five years ago, the TSA pledged to improve oversight and training for its workers on hair pat-downs.

But it turns out there’s an issue beyond the screeners: the machines themselves.

The futuristic full-body scanners that have become standard at airports across the United States are prone to false alarms for hairstyles popular among women of color.

“Maybe, down the line, they will be redesigning the technology, so it can tell apart what’s a real threat and what is not.”

In a request to vendors last summer, the TSA asked for ideas “to improve screening of headwear and hair in compliance with Title VI of the Civil Rights Act.” That law bars federally funded agencies and programs from discriminating — even unintentionally — on the basis of race, color or national origin.

“With black females, the scanner alarms more because they have thicker hair; many times they have braids or dreadlocks,” said a TSA officer who works at an airport in Texas and asked not to be named. “Maybe, down the line, they will be redesigning the technology, so it can tell apart what’s a real threat and what is not. But, for now, we officers have to do what the machine can’t.”

A government report in 2014 found that the machines also “had a higher false alarm rate when passengers wore turbans and wigs.”

Asked about the false alarms, the TSA said in a statement to ProPublica that the agency “is reviewing additional options for the screening of hair.” (Read the agency’s full statement.)

A senior TSA official said in an interview that hair pat-downs are not discriminatory and are done when a body scanner indicates that a passenger has an object in his or her hair. “I get a hair pat-down every time I travel. I’m a white woman,” said the official, who agreed to be interviewed on the condition that she not be named.

“Procedures require that if there is an alarm on the technology, the pat-down [must] be conducted,” the official said. She added that the agency has found no evidence of discrimination in hair pat-downs or any pattern that pointed to a particular airport.

The TSA advises passengers to remove all items from their hair before going through airport security and warns on its website that “wearing a hairpiece, extensions or a wig as well as a ponytail, a hair bun or braids” may trigger an alarm.

The TSA would not say if it had ever found a weapon in a passenger’s hair. Its website says: “You’d be surprised what can be hidden in hair. The most notable things we’re looking for in hair are explosives and improvised explosives device components.”

“There needs to be a level of sensitivity about how different people perceive these kinds of searches.”

The false alarms affect more than the passengers whose hair is searched. The government report from 2014 noted that patting down passengers slows security lines and may increase costs by requiring extra screeners.

Full-body scanners — millimeter wave machines — have become standard at airports over the past decade. The TSA accelerated their installation after failed “underwear bomber” Umar Farouk Abdulmutallab boarded a flight on Christmas Day 2009 from Amsterdam to Detroit with plastic explosives inside his pants.

The scanners are made by L3 Technologies. A government report said they cost about $150,000 each, and that the TSA spent more than $100 million deploying the machines. An L3 spokesperson declined to comment on the machines, and pointed us to the company’s website.

Unlike metal detectors, the scanners can detect nonmetallic items. But they can’t tell what objects are — or, apparently, if it’s just thick hair. That requires humans.

Last month, ProPublica asked people to share their experience with hair searches at airports. We received 720 responses. More than 90% were from women. Of the respondents overall, 313 identified as white only, 311 as black only and 96 as other ethnicities such as Latino, Asian American, Middle Eastern, American Indian or Alaskan Native, or mixed.

Most black women and other women of color we heard from described the hair pat-downs as intrusive and disrespectful. They said they felt singled out during the process.

“I get TSA workers have a job to do, which is to keep us safe,” said Wanzer, the Washington, D.C., resident who frequently has her hair searched. “But there needs to be a level of sensitivity about how different people perceive these kinds of searches.”

Black women have long been discriminated against for wearing their hair as it grows naturally or for sporting hairstyles mostly associated with black culture, like braids, two-strand twists, cornrows and locks. Natural black hair has been deemed unhygienic, unprofessional and radical, and it has been policed for centuries.

Most white women we heard from said they didn’t mind the searches or considered them a minor annoyance.

Toni Moss, who is white, said she travels by plane about four times a month. Moss said she is occasionally flagged for a hair search. The searches happen only when she keeps her short, voluminous hair in its naturally curly state. When Moss straightens her hair before traveling, she doesn’t get a hair pat-down, she said.

“It isn’t really something that I mind. I just find it funny when it happens but, then, it doesn’t happen every time I travel,” said Moss, whose hair was searched most recently in January while going through security at Austin-Bergstrom International Airport in Texas.

“The last time it happened I was joking with TSA [officers],” Moss said. “I told them, ‘Sorry you didn’t find a pork chop in my head.’ And they laughed.”

The agency has said that even if the machines don’t sound an alarm, agents can still choose to do hair pat-downs if “an individual’s hair looks like it could contain a prohibited item or is styled in a way an officer cannot visually clear it.”

That discretion enables profiling, said Abre’ Conner, a lawyer with the ACLU of Northern California, which filed the complaint against the TSA in April 2014. “When that discretion comes into play, unless there is explicit- and implicit-bias training, that can play out in a way that harms people of color, black people,” Conner said.

When Jazzmen Knoderer traveled by plane for the second time in her life, in 2012, TSA officers at Dayton International Airport in Ohio asked her to step aside for a full-body pat-down. It happened again the next time she took an airplane and went through security, at an airport on the Hawaiian island of Maui in 2013. And again, for her fourth plane trip in 2014, at Baltimore-Washington International Thurgood Marshall Airport.

The first time Knoderer’s hair was searched, it was short and styled in two-strand twists. The second time, she had an Afro. The third time, her Afro was no more than 3 inches long, she said.

Knoderer said she didn’t go through a body scanner or metal detector before she was searched.

The number of complaints filed with the TSA by passengers alleging racial discrimination in hair pat-downs rose from 73 in 2017 to 105 in 2018.

It’s not clear what has caused that increase. One reason may be growing scrutiny of the issue, in particular a powerful story in Cosmopolitan last year in which the writer recounted her own experiences and those of others. Most people we heard from said they had not known they could file a complaint.

The TSA is one of the most diverse agencies in the federal government. One-quarter of the nation’s 46,000 airport screeners are black and 23% are Hispanic, according to Office of Personnel Management data.

Conner, the ACLU lawyer, said black airport screeners seem just as likely to conduct hair pat-downs as white screeners. The only difference is that a black screener “doesn’t necessarily leave my hair as messed up,” she said.