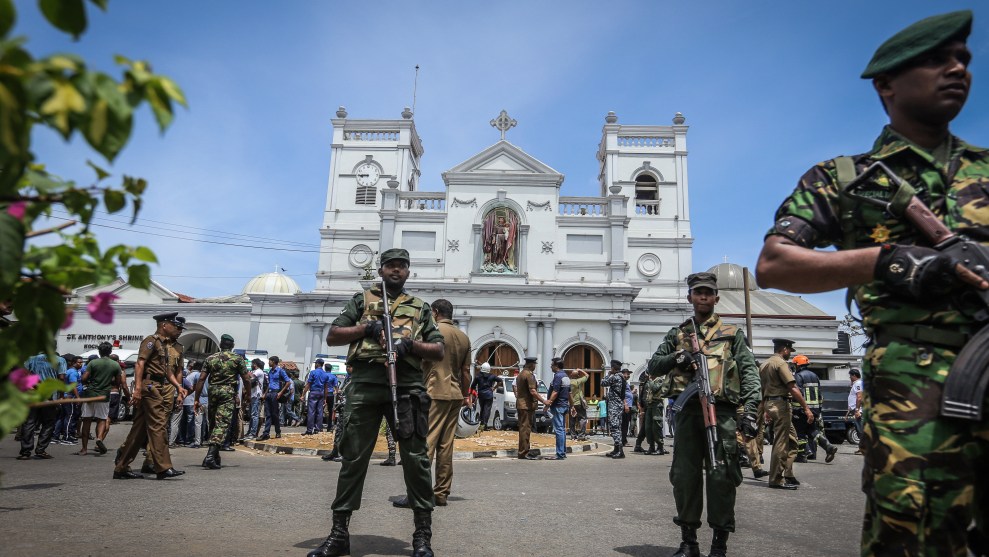 Sri Lankan soldiers stand guard in front of the St. Anthony's Church in Kochchikade, where one of the bombings occurred on Sunday.Tharaka Basnayaka/NurPhoto via ZUMA

Sri Lanka’s government blocked residents of the island nation from accessing several social media platforms on Sunday, following bombings of luxury hotels and churches during the Easter holiday that killed at least 200, in an effort to stop false information about the attacks from spreading.

The country’s defense ministry said that it is currently conducting investigations regarding the bombings and that it “has taken steps to temporarily block all the social media avenues until the investigations are concluded.”

Facebook—along with its messaging apps WhatsApp and Messenger and its image-sharing app Instagram—as well as Snapchat, YouTube, and Viber were all blocked by the Sri Lankan government on Sunday, according to NetBlocks, an internet rights organization based in London. A report by Sri Lankan state news confirmed that Facebook and Instagram were being blocked because “false news reports were spreading through social media.”

Some reports have suggested that Twitter may be blocked in Sri Lanka as well. A spokesperson for Twitter did not confirm this and said over email that the company has “nothing to share” at the moment.

A Facebook spokesperson said via email that the company is “aware of the government’s statement regarding the temporary blocking of social media platforms.” The spokesperson added, “Teams from across Facebook have been working to support first responders and law enforcement as well as to identify and remove content which violates our standards.”