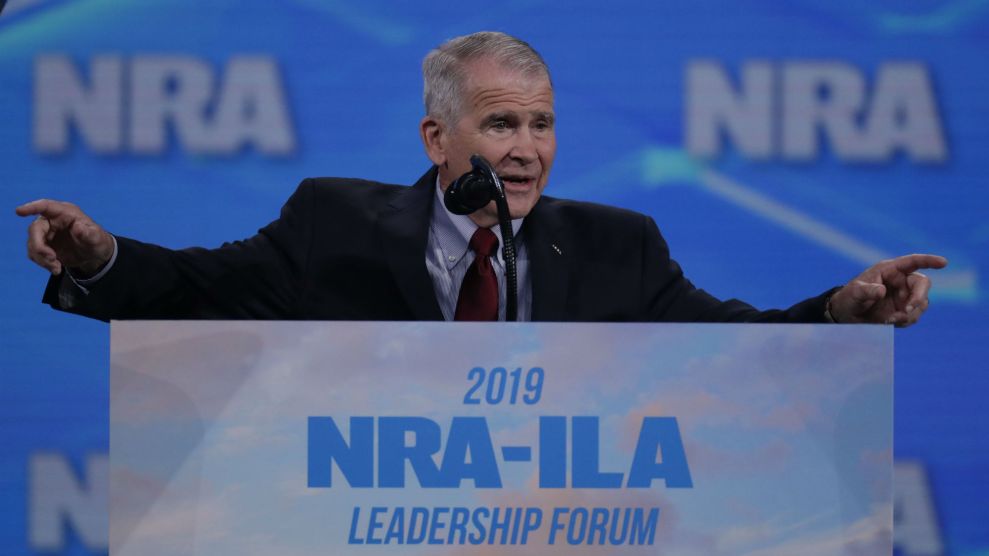 After spending the last two days leveling allegations of financial impropriety against one another, both the CEO and the President of National Rifle Association are facing uncertain futures for their posts helming the nation’s most powerful gun rights group. Oliver North announced on Saturday that he had been forced to step down as the group’s president after the NRA board prevented him from seeking a second term as president, marking his resignation after more than two decades serving on the NRA’s board. Meanwhile, CEO and Executive Vice President Wayne LaPierre faced a vote by members to remove him from the leadership job he’s held since 1991. (The vote failed.)

That internal chaos has been aired out in full public view during the NRA’s annual meeting in Indianapolis over the last few days, as the organization has struggled in recent months, facing financial problems, threats to its nonprofit status, calls from congressional Democrats for a federal investigation of its role in political advertising, and growing federal scrutiny of the NRA’s ties to Kremlin-linked Russian operatives, the Trump campaign, and possible campaign finance violations, spread across five different congressional probes and the FBI.

The turmoil ramped up Thursday afternoon, when LaPierre sent a letter to the NRA board, obtained by the Wall Street Journal, alleging that North has been trying to extort him into resigning his NRA post. The letter claimed that North—best known for his role in the Iran-Contra scandal—had threatened to go public with accusations of over-the-top spending by LaPierre on his wardrobe and by staff on travel expenses, of sexual harassment allegations against a staffer, and damaging information related to the NRA’s nonprofit status. One member of the board told the Wall Street Journal that LaPierre’s letter was an “angry reaction” to a previous letter from North, alleging $200,000 in wardrobe expenses by LaPierre.

On Friday, President Donald Trump and Vice President Mike Pence both spoke at the NRA’s annual meeting, lauding the group’s work to protect Second Amendment rights. By Saturday morning, the focus had returned to the internal battle among NRA leadership. As members gathered to observe the meeting, the stage was set up with seats and placards for NRA leadership, including North and LaPierre.

But North did not show up to the meeting. Instead, an NRA board member read a letter aloud from North. It pointed to his allegations against LaPierre, as well as articles in the New York Times, New Yorker, and Wall Street Journal that have detailed allegations of financial mismanagement by senior NRA officials. “There is a clear crisis that needs to be dealt with quickly and responsibly,” North wrote in his letter, adding that the accusations, if proven true, would threaten the NRA’s nonprofit status.

BREAKING: @NRA Board member reads a letter from Oliver North saying he has been forced out of the organization due to his allegations that NRA leaders engaged in financial improprieties. North’s term ends Monday. #NRAAM

The ricocheting allegations between the NRA’s top leaders are centered in part on an ongoing dispute between the NRA and its advertising firm, Ackerman McQueen. The ad firm hired North last year to host a documentary program on NRATV; this month, the NRA sued Ackerman McQueen over a billing dispute. LaPierre alleged in his Thursday letter that North’s threats to him were in fact at the behest of his employer, Ackerman McQueen, suggesting that North is complicit in the ad firm’s retaliation against the NRA for their suit.