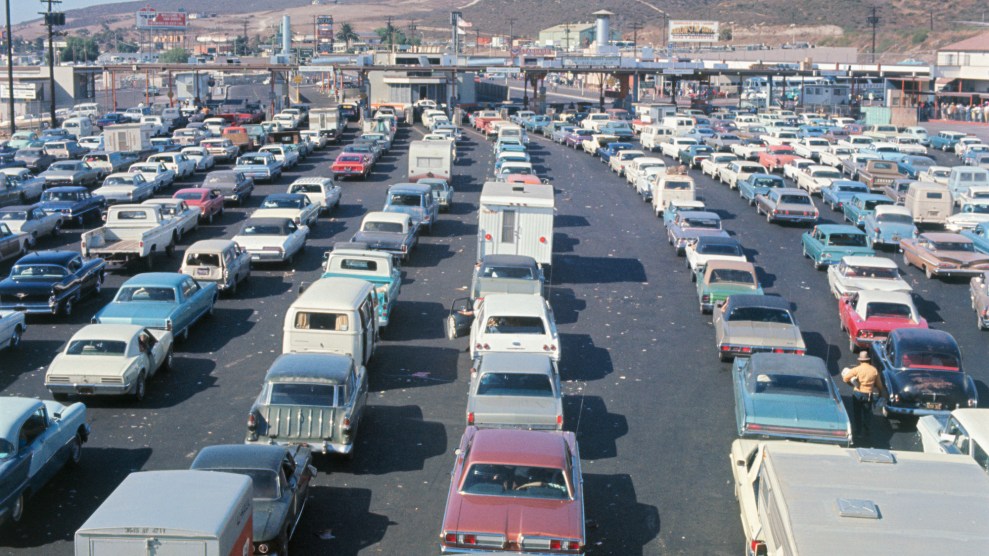 A traffic jam at the border crossing between Tijuana, Mexico, and San Ysidro, California, after the Nixon administration adopted a rigorous inspection program to punish Mexico and stop drug smuggling. Bettmann/Getty

We’ve been here before. In 1969, President Richard Nixon brought traffic across the US-Mexico border to a halt. In his autobiography, Nixon ally G. Gordon Liddy, who helped orchestrate the standstill—and later, more famously, the Watergate break-in—explained the logic behind the move:

The result was as intended: chaos…[The operation], with its massive economic and social disruption, could be sustained far longer by the United States than by Mexico. It was an exercise in international extortion, pure, simple, and effective, designed to bend Mexico to our will.

Fifty years later, President Donald Trump is threatening to do the same thing. As with Nixon’s operation, a Trump border shutdown would scapegoat Mexico for problems that the administration is unable to fix—and would likely result in social and economic chaos, followed by a predictable US retreat.

The difference is that Nixon had clear and potentially achievable objectives in mind with his game of diplomatic chicken. Trump does not.

Nixon had run for president in 1968 on a “law and order” platform and vowed to “move against the source of drugs.” After taking office, Nixon quickly formed an anti-drug task force, on which Liddy served as an adviser. Its June 1969 report focused almost entirely on stopping Mexican-grown marijuana. The United States wanted to fly planes that would drop herbicides on Mexican cannabis crops, but Mexico effectively told it to “go piss up a rope,” according to Liddy. Nixon responded three months later with his border shutdown, called Operation Intercept. US officials publicly denied that it was retaliation, claiming that the goal was to make marijuana more expensive for college students.

The operation called for searching every pedestrian and vehicle entering the United States through official border crossings with Mexico. It required the government to send about 2,000 federal agents to the border from as far as Hawaii. The US ambassador to Mexico warned that it could have “catastrophic consequences” on the two countries’ relationship, but it went into effect in September 1969 anyway.

The inspections, which sometimes included strip searches, caused waits of up to six hours at ports of entry, crippling cross-border commerce. Liddy and other members of the task force used a government plane usually reserved for deporting Mexicans to observe the results of their operation near San Diego. “It was the biggest mess any of us had ever seen,” Liddy boasted in his autobiography, “and we took perverse delight in our handiwork.”

Mexican officials were less enthused. While welcoming the Apollo 11 astronauts to Mexico in late September 1969, President Gustavo Díaz Ordaz said that a “bureaucratic error” had raised a “wall of suspicion” between the two countries. A Mexican businessman told the New York Times, “Operation Intercept is just a spectacular stunt which gives the absurd idea that everyone in Mexico is a suspected drug trafficker.” A left-wing Mexican congressman called it a “racist trick.” Mexicans on the border responded by organizing a boycott on travel to the United States.

Americans in border towns weren’t happy either. Sen. Ralph Yarborough, a Democrat from Texas, dubbed it “Operation Inept.” The owner of a Nogales, Arizona, department store argued, “You don’t burn down your barn just to kill a couple of rats, and that is what our government is trying to do.”

As the operation continued, a State Department official explained in a memo that the demeaning border inspections played into suspicions that Americans saw Mexicans as “inferior beings.” He explained, “The problem not only stems from traffic delays and business losses, but perhaps even more fundamentally from a feeling of wounded dignity.”

The Times did note a “positive” result for Nixon: There was more attention being paid to the “drug problem” than ever before. After being warned by Henry Kissinger about the damage Operation Intercept was causing, Nixon wrote in a memo to White House Counsel John Ehrlichman, who like Liddy was later sent to prison for orchestrating the Watergate burglary, that the United States had made its point and that it was time to negotiate. On October 10, Operation Intercept was replaced with a more lenient plan called Operation Cooperation that the Nixon administration unconvincingly spun as a victory.

The postmortems of Operation Intercept were withering. “I think it was just a poorly planned operation out of somebody’s hat,” said an official with a chamber of commerce in Texas. Raúl Héctor Castro, a former ambassador to El Salvador and Bolivia who was later elected governor of Arizona, called it “one of the biggest boondoggles in history.” The Times editorial board wrote that it was “a massive political blunder” from “every conceivable standpoint.”

Trump may be on the verge of a similar blunder. The president has been tweeting about closing the border since at least October. But he got specific for the first time on Friday, writing that he will shut down the border (or large sections of it) this week if Mexico doesn’t stop all unauthorized immigration. That is impossible, so he will soon have to carry out his threat or admit he was bluffing. As with his failed effort to shut down the government to get additional border wall money, it’s not clear that Trump has thought more than one step in advance. But with the number of families crossing the border at record highs, Trump appears desperate to do something punitive and, having exhausted most of those options, closing the border may be the best stunt left. (State Department officials have reportedly told Mexico’s foreign minister that the Trump administration will not close the border.)

Trump’s shutdown would close some or all of the official border crossings and reassign the Customs and Border Protection officers working there to assist Border Patrol agents tasked with stopping migrants arriving between these crossings. But that would do nothing to reduce the record number of families crossing the border without authorization to seek asylum, since they’re explicitly seeking out Border Patrol agents to turn themselves in to, so that they can make their asylum claims.

For Trump, the real goal of a shutdown, aside from publicity, would be pressuring two targets: Congress and Mexico. The Trump administration has been trying, without success, to get Congress to allow it to detain families indefinitely and deport Central American children more quickly. The president may believe that frustration over the economic impact of reduced cross-border trade could lead more Americans and businesses to favor giving the Trump administration what it wants. But as with the shutdown he forced in December, holding the American public hostage could easily backfire.

Unlike Nixon, Trump is making no effort to hide the fact that border closures would be a way of retaliating against Mexico for not meeting his impossible demand of stopping all migrants from reaching the border. Mexico has deported hundreds of thousands of Central Americans in recent years, and it is already cooperating with the administration’s most important border crackdown: a policy known as Remain in Mexico that returns asylum-seekers to Mexico to wait for their US hearings.

In a sense, Trump’s border shutdown is already underway. Homeland Security Secretary Kirstjen Nielsen has directed up to 750 Customs and Border Protection officers at ports of entry to assist Border Patrol agents. A senior Homeland Security official told reporters on Tuesday that the reassignment of CBP officers is already causing longer waits at the border, including three-hour backups in Brownsville, Texas—twice as long as the worst delays reported last year. It’s an echo of the Nixon standstill, and a potential preview of things to come.

Trump has no apparent endgame, but he may not care. If he carries out his threat, news outlets would show cars backed up at the border just like they did in 1969. When families keep coming anyway, Trump will have one more thing to tell his base he did to stop migrants before he snaps back to blaming Democrats.

The talking point would come at a great cost to both countries. A five-hour shutdown in November at just one border crossing in the San Ysidro district of San Diego was estimated to have cost businesses in the area about $5 million in lost revenue. Duncan Wood, the director of the Wilson Center’s Mexico Institute, told CBS that a full shutdown would cost hundreds of millions of dollars per day, and potentially up to a billion per day. “It’s an economic impossibility,” Wood said. “Literally, the two economies would grind to a halt.”

Mexico is no more amenable to being bullied than it was five decades ago. A shutdown could force President Andrés Manuel López Obrador, a left-wing populist, to take a harder line against Trump by kneecapping policies like Remain in Mexico. That would be a perfect encapsulation of Trump’s approach to immigration enforcement thus far: cruel political theater that keeps his base angry while undermining his administration’s actual agenda.