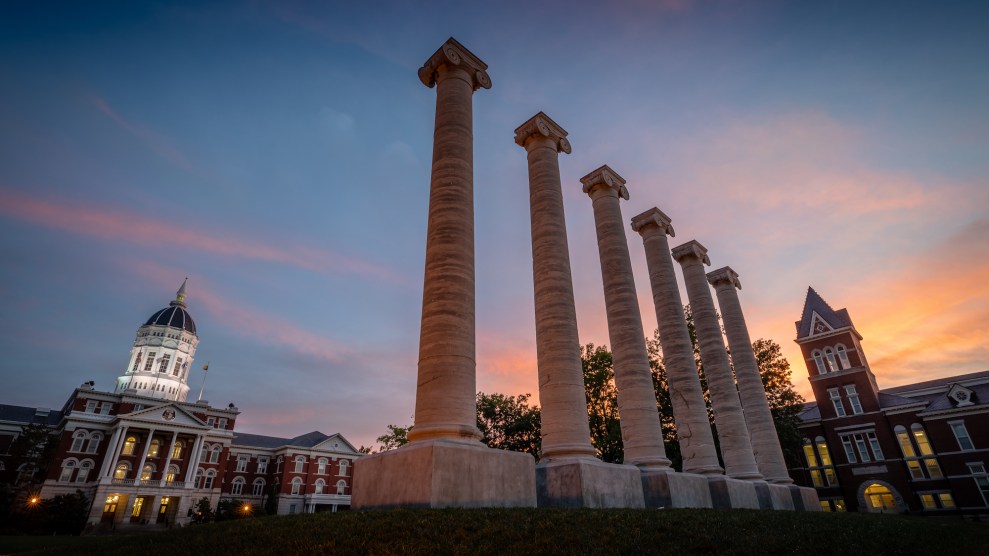 College students deciding whether to report sexual assault or harassment to their universities already face a slew of barriers. There’s the shame, embarrassment, and fear of going through an emotionally difficult misconduct process. There’s the panic that even if they report, nothing will be done. And, as a landmark 2015 campus sexual assault survey found, there’s the pervasive belief that most incidents aren’t “serious enough” to report—even if they involve forcible penetration.

Now, lawmakers in Missouri are advancing a pair of bills that critics say would make reporting campus sexual misconduct even more difficult, allowing colleges to raise the bar for victims to prove their cases and providing powerful disincentives to speak up about sexual violence.

The more draconian version of the legislation, coming from the state Senate, could open survivors up to lawsuits if a college isn’t able to substantiate their report of an assault. But the bills from both the state House and Senate require students who choose to make a report to submit to cross-examination by the accused perpetrator, a controversial practice that some say re-traumatizes survivors. Either version of the legislation would also give students—mostly young men—accused of sexual assault or harassment more power than they would have anywhere else in the country.

The bills, introduced by Republicans with powerful seats on state House and Senate education panels, are moving through the legislature; both were recently voted out of committee and await debate in the full chambers. The legislation has strong support within the state party, as well as the backing of a new dark money group and one faction of the NAACP.

The version of the bill that appears more likely to pass and go to the governor’s desk is the compromise measure in the House, which would enshrine in state law many temporary Title IX rules released by Education Secretary Betsy DeVos in 2017. Among other measures, the bill would:

There’s still a chance the harsher version of the law, or parts of it, could be signed into law. That bill would codify some of the laws most hostile to survivors of campus sexual violence. It would:

Both bills would create a new process for students to request Title IX cases be heard by a little-known state panel of commissioners, who would follow courtroom-like procedures and could potentially overturn suspensions or expulsions. They would also require universities to enforce a rule that no one involved in a Title IX complaint, presumably including survivors themselves, could use the word “survivor” or “any other term that presumes guilt” before a formal finding of sexual misconduct.

No one involved in a Title IX complaint, presumably including survivors themselves, could use the word “survivor” or “any other term that presumes guilt” before a formal finding of sexual misconduct.

Supporters of the legislation say it’s needed to guarantee accused students are treated fairly. But its opponents include many local universities and the Missouri Coalition Against Domestic and Sexual Violence, as well as national survivor-rights organizations, which argue the bills would discourage victims from reporting sexual violence or harassment. “These bills would prove devastating to survivors, and drastically decrease the number of survivors coming forward,” Sage Carson of Know Your IX said in a statement. The organization’s website states that the bills rely on a “stereotype that victims of sex discrimination, including sexual assault, are inherently less credible” than those who report other types of student misconduct.

The debate over the bills echoes a national conversation about the rights of men accused of sexual violence that’s been growing since President Donald Trump took office and that reached a fever pitch during the confirmation hearings of Supreme Court Justice Brett Kavanaugh. The new legislative effort in Missouri reflects the escalating fear, consistently pushed by Trump—himself accused of sexual misconduct by at least 20 women—that any man could be falsely accused of rape: “It is a very scary time for young men in America,” the president has stated.

This fear has also started to permeate official policy in Washington. After DeVos released her temporary guidance in 2017, with input from men’s rights organizations, the federal Education Department set about writing formal regulations on how universities should interpret Title IX, the law that prohibits sex discrimination in education, in cases of sexual assault and harassment. Though less extreme than the Missouri Senate bill, DeVos’ final rules are expected to strengthen the rights of accused students, and have been extensively criticized by survivors of sexual violence as well as universities.

The Missouri bills were authored and have been championed by Republicans, but they may also mark a shift in the broader political discourse. The legislation has attracted support from a prominent civil rights organization and at least one Democrat, St. Louis state Rep. Steven Roberts, who helped amend the House bill. (While unrelated to the bill, it’s worth noting that Roberts has faced allegations of rape from another lawmaker; a prosecutor declined to press charges in the case for lack of evidence, and Roberts filed a defamation suit against his accuser.) The president of the St. Louis County branch of the NAACP, John Gaskin III, also released a statement recently saying the organization’s chapter supported both bills since black men were disproportionately effected by “denial of due process” at Missouri colleges. “The NAACP stands firm in [its] historic pursuit of liberty in the face of injustice,” the statement said.

The effort reflects the escalating fear, consistently pushed by Trump, that any man could be falsely accused of rape: “It is a very scary time for young men in America.”

(The state NAACP, however, opposes the bills. “We cannot allow the further erosion of civil rights in Missouri by allowing protections against sexual assault on college campuses through Title IX to be taken away,” the statewide organization’s president, Nimrod Chapel Jr., wrote in a news release 10 days after Gaskin’s statement. “Missouri needs help enforcing the protection of civil rights and can do better.”)

To be clear, racial discrimination is likely at play in some Title IX adjudications, says University of Missouri associate law professor Ben Trachtenberg, who has published a law journal article on the topic. “Given the data we have about K-12 school discipline and about the criminal justice system, it would be amazing if university student discipline somehow avoided the problem of racial bias,” Trachtenberg says. At the same time, because colleges don’t track—or won’t release—the data, there’s basically no empirical evidence to support the claim. (In an Atlantic article raising questions about racial bias in Title IX cases, Emily Yoffe cited Colgate University, where 4.2 percent of the students were black in the 2013-2014 school year but made up 40 percent of accused students in sexual misconduct adjudications; however, the overall number of adjudications was small.)

“The risk of racial bias should raise concerns but cannot justify ignoring campus rape, nor can it justify some of the provisions of the different Missouri bills,” Trachtenberg says. “We can take racial justice seriously without abandoning sexual assault victims.”

The force behind the legislation is, at least in part, Richard McIntosh, a Jefferson City lobbyist whom the Kansas City Star editorial board has dubbed an “unelected master legislator.” A former budget and appropriations staffer who worked for both Democrats and Republicans, McIntosh now runs a lobbying firm, Flotron McIntosh LLC, representing tech industry giants like Oracle, Cisco, and, notable in this case, World Wide Technology—one of America’s largest private companies that was founded by St. Louis’ David Steward, one of the country’s richest black businessmen.

According a Star report from early March, McIntosh has been pushing for Title IX changes since last year, when he convinced Republican lawmaker Shamed Dogan to attach an amendment containing many of the same measures to a separate bill. That effort failed, but McIntosh was already starting to lay the groundwork for a second attempt. In August, he registered a company called Kingdom Principles, a 501(c)(4) nonprofit—read: dark money group—that is reportedly bankrolling the Missouri Campus Due Process Coalition, which promotes the legislation on social media. (“Time after time, innocent lives have been ruined because institutions have rushed to judgment,” the coalition tweeted on March 1.) Kingdom Principles has hired 29 lobbyists in the past month alone, according to the Missouri Ethics Commission records.

“We’re not plowing any new constitutional ground,” McIntosh said on a Missouri politics talk show. “We’re simply taking those principles that every American would expect to have if they’re accused of something as serious as a sexual assault and knowing that we have these processes in place so that you can get to the truth—that’s what we’re after.”

Kingdom Principles isn’t required to disclose its donors, but at least part of its money comes from Steward of World Wide Technology, lobbyist Joe Lakin confirmed to the Star. Over the past decade, Steward has become a big funder of Missouri GOP politics, giving at least $241,000 to Republicans running for state and local office in 2016, according to the National Institute for Money in Politics. (That includes $1,000 to state Sen. Bill Eigel, who penned a March 18 op-ed in the Missouri Times supporting the Title IX legislation.)

“We as an organization support individuals such as David Steward who advocate for due process,” Gaskin said in his statement. “The NAACP applauds individuals who have the resources to support, shed light and effect change on a serious civil rights issue.”

At this point, it’s unclear if the idea for the bills, or just some of the money behind them, came from Steward, or why the billionaire is investing in the effort. Similar questions exist about McIntosh, who not only is organizing the lobbying but actually helped draft the House bill, according to Republican Rep. Dean Dohrman, who sponsored the measure. (Neither McIntosh nor a press representative for Steward’s company returned a request for comment.)

Entangling McIntosh further in the complicated web behind the legislative push is his wife, Audrey Hanson McIntosh, who is the presiding commissioner of the five-member Administrative Hearing Commission, the Associated Press reported last month. That’s the panel that the bills stipulate would review some campus sexual misconduct cases and appeals, with courtroom-like procedures. Richard McIntosh told the AP that his wife could potentially recuse herself from cases affected by his work. She’s not the only commissioner with close ties to people advocating for the bill: Renee Slusher, who also sits on the panel, is married to Chris Slusher, a defense attorney in Columbia, Missouri, who represents students facing Title IX allegations and testified in favor of the bill during a February 19 hearing.

Both bills are now up for debate in their respective houses. If the House bill passes and is signed by Republican Gov. Mike Parson, it would go into effect immediately.