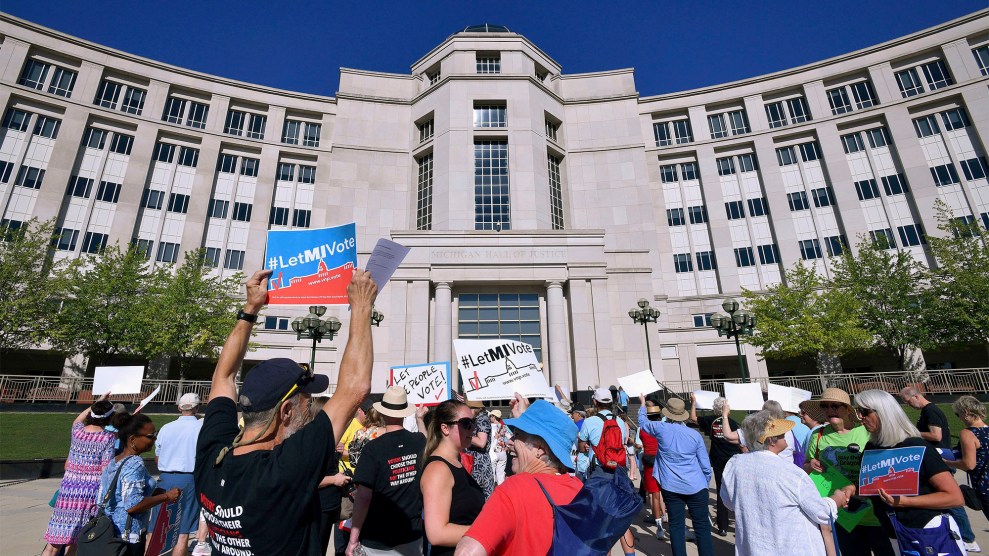 Demonstrators rally outside the Michigan Hall of Justice in Lansing on July 18, 2018, in support of an independent redistricting commission.Dale G. Young/AP

A federal court unanimously struck down legislative maps drawn by Michigan Republicans on Thursday, finding that they were guilty of “deliberately discriminating against Democratic voters.”

The ruling by a three-judge panel invalidated 34 congressional, state House, and state Senate districts that had been challenged by the League of Women Voters and Democratic plaintiffs as unconstitutional gerrymanders and ordered that they be redrawn before the 2020 election. That could give a big boost to Democrats in Michigan in 2020. In the 2018 election, under the now-invalidated maps, Democratic legislative candidates in Michigan won 52 percent of the statewide vote but picked up only 47 percent of seats in the state House.

Emails from Michigan Republicans who drew the maps, which were released as part of the federal trial, boasted of concentrating “Dem garbage” into as few districts as possible in order to maximize the GOP’s advantage.

The Michigan ruling “joins the growing chorus of federal courts that have, in recent years, held that partisan gerrymandering is unconstitutional,” the court noted. That includes rulings invalidating Republican-drawn maps in key swing states like Wisconsin and North Carolina The Supreme Court is currently weighing whether to rein in partisan gerrymandering in Maryland and North Carolina, with a decision expected in June.

Regardless of what the Supreme Court does, Michigan’s political districts will be drawn by an independent, citizen-led redistricting commission in 2021, after voters approved a ballot initiative last fall to curb gerrymandering.