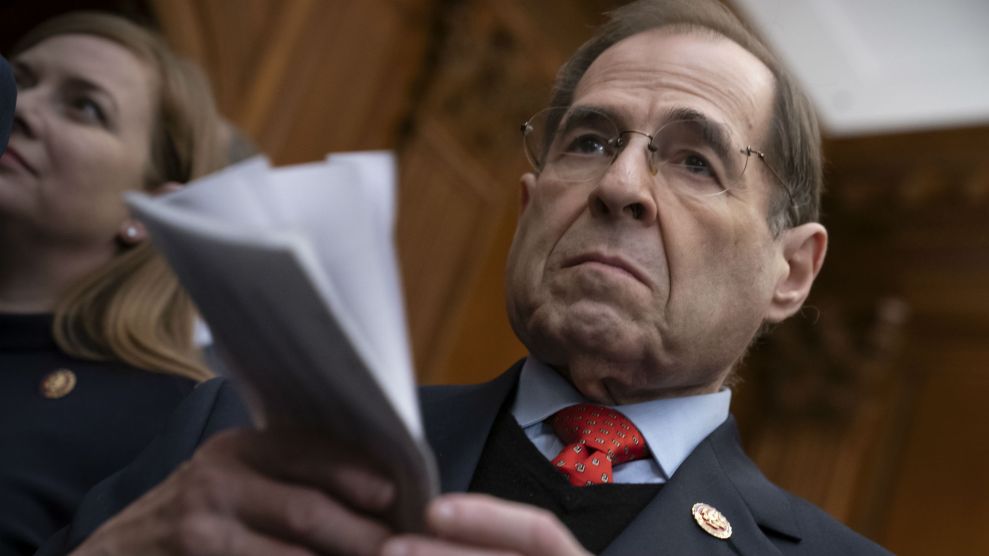 Democrats are not happy with the Justice Department. At a press conference Wednesday night, House Judiciary Committee Chairman Jerrold Nadler (D-N.Y.) criticized Attorney General William Barr’s handling of the long-awaited Mueller report. A redacted version of the report is expected to be released Thursday morning, following a press conference from Barr at 9:30 a.m. ET—though the House Judiciary Committee isn’t expected to see it for more than an hour or more after Barr speaks to the press. And, as the New York Times reported Wednesday, Justice Department officials have already discussed findings from the report with the White House, while Trump’s lawyers supposedly plan their rebuttal to the report.

At the press conference, Nadler said the attorney general “appears to be waging a media campaign on behalf of President Trump” and laid out four ways Barr has put his “spin” on the report: He “cherry picked” findings in his March 24 letter about the report, “withheld” summaries written by the special counsel that “were intended for public consumption,” reportedly briefed the White House on the report’s findings before sharing it with Congress, and lastly, is releasing the report to Congress between 11 am and noon, “well after” Barr’s press conference on Thursday.

“Attorney General Barr is not allowing the facts of the Mueller report to speak for themselves, but is trying to bake in the narrative about the report to the benefit of the White House,” Nadler said.

Nadler also argued that Barr was deliberately releasing the report so close to a holiday weekend to make it more difficult to respond to.

After taking a few questions, he said he assumes it would be “useful” to ask special counsel Robert Mueller to testify before Congress. “We’ll have to make those decisions after reading what we get.” Similarly, he noted the committee would possibly issue subpoenas, depending on what redactions they’re faced with tomorrow.

Earlier on Wednesday, ahead of his press conference, Nadler also said via Twitter that he was “deeply troubled” by the developments.

I’m deeply troubled by reports that the WH is being briefed on the Mueller report AHEAD of its release. Now, DOJ is informing us we will not receive the report until around 11/12 tomorrow afternoon — AFTER Barr’s press conference. This is wrong. #ReleaseTheReport https://t.co/bR50HhGJ0i

Other top Democrats have expressed their displeasure with the situation:

AG Barr has thrown out his credibility & the DOJ’s independence with his single-minded effort to protect @realDonaldTrump above all else. The American people deserve the truth, not a sanitized version of the Mueller Report approved by the Trump Admin. https://t.co/fgXwiLuQfr

The process is poisoned before the report is even released.

Barr shouldn’t be spinning the report at all, but it’s doubly outrageous he’s doing it before America is given a chance to read it.

Barr doesn’t want Americans to make up their own mind. What is he so afraid of? https://t.co/v6hKz3IBNz

Just been informed by DOJ that we’ll receive Mueller’s report only after Barr gives a press conference.

Once again, Barr wants to shape the public’s perception of the report.

This is on top of reports DOJ secretly briefed the White House.

This is not justice. Just PR.

This is outrageous. The AG is supposed to be an independent beacon of truth and justice. Instead, Barr is debasing the rule of law, degrading our democratic institutions, and decimating any trust the American people have left in this Administration. #ReleaseTheReport https://t.co/8ncMVVBPKx