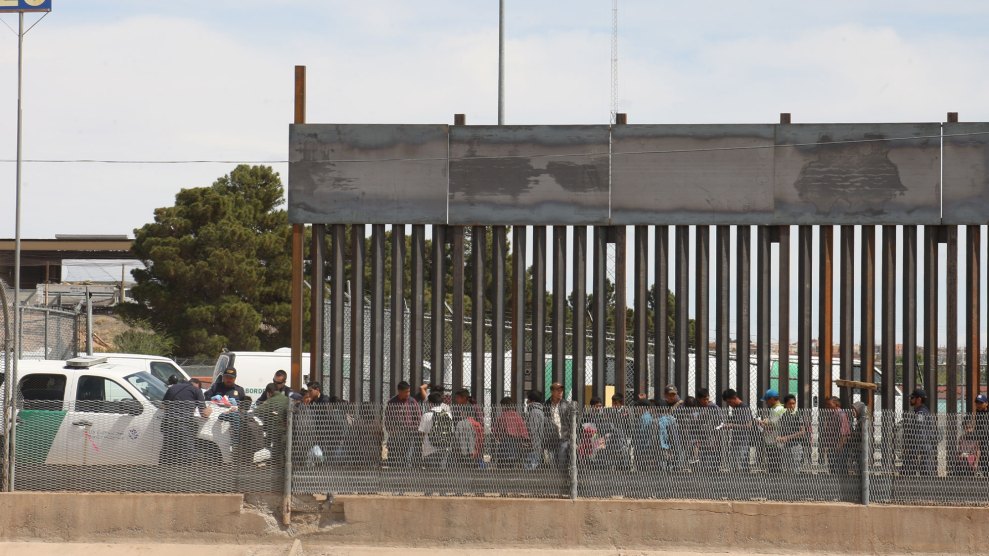 In the middle of a turmoil-filled week at the top of the Department of Homeland Security, the US Border Patrol announced Tuesday that it has stopped more immigrant families than any previous month on record, with 53,000 family members apprehended between official ports of entry in March alone. This is sixth time in seven months that the apprehension numbers have surpassed those from the previous month.

New data from US Customs and Border Protection shows the agency encountered a total of 103,000 migrants at the border with Mexico in March. Of those, 92,000 were apprehended by Border Patrol rather than processed by customs agents at ports of entry. Thanks to a Trump administration policy known as “metering” that started last summer, CBP is sharply limiting the number of people allowed to request protection at ports of entry, causing some asylum seekers to cross the border without authorization.

From October 2018 to March 2019, the agency has apprehended more than 361,000 migrants, which is more than double the number during same time period last fiscal year. The families, many of whom are from El Salvador, Guatemala, or Honduras, are generally not trying to escape once they cross, instead turning themselves in to Border Patrol agents to request protection under US asylum laws. On Tuesday, officials announced there had been a 374 percent increase in family unit apprehensions from October through March when compared to the same period of the 2018 fiscal year.

Immigrant rights groups have criticized how DHS has handled the influx of families at the border, saying the agency has enough resources to process asylum seekers and that officers have known that the numbers would increase yet didn’t prepare. “It makes me nervous when I think of all these little kids channeled through the dysfunctional system, particularly with this great uncertainty and change at the department,” said Robyn Barnard of the nonprofit Human Rights First. “I worry they aren’t getting their due process.”

“We don’t have room,” Trump told Border Patrol agents in El Paso last week. “That means you can’t take them. I don’t think anyone’s ever expressed it like that, but I’m expressing it like that: When it’s full, it’s full.”

The government released the latest apprehension data shortly after President Donald Trump forced out DHS Secretary Kirstjen Nielsen and pulled his nomination for acting ICE director Ronald Vitiello. It also came days after Trump told Border Patrol agents in El Paso that they didn’t have to take in migrants when they encounter them, something that would be illegal to carry out. “We don’t have room,” Trump said. “That means you can’t take them. I don’t think anyone’s ever expressed it like that, but I’m expressing it like that: When it’s full, it’s full.” Supervisors then told Border Patrol agents to ignore Trump’s request, as CNN reported Monday.

Hastings said that out of the 103,000 apprehensions in March, more than 53,000 were family units and almost 9,000 were unaccompanied minors. Historically, the number of migrants at the border goes up every month until the beginning of summer. Border Patrol took more migrants into custody last month than in any March since 2007.

Another phenomenon, Hastings said, is the increasing number of large groups—consisting of 100 or more migrants—crossing the US-Mexico border. From October to March 28, Border Patrol saw more than 100 such groups. For context, in all of the 2018 fiscal year, the agency documented 13 such groups, and only two the previous year.

More than 11,000 “non-criminal family members” have been released since March after being processed by immigration officials. They were given notices to appear in court and were released in US cities such as El Paso, San Diego, and Phoenix because of a lack of detention space. They’ve been released to either NGOs or, when nonprofits can’t take them in, dropped off at bus stations, Hastings said.

Some 540 customs agents have already been moved from ports of entry to smaller facilities to help Border Patrol process migrants as they arrive. CBP is now asking for volunteers working at airports and the border with Canada to help process migrants along the US-Mexico border. “This has been an all hands on deck for us,” Hastings said.