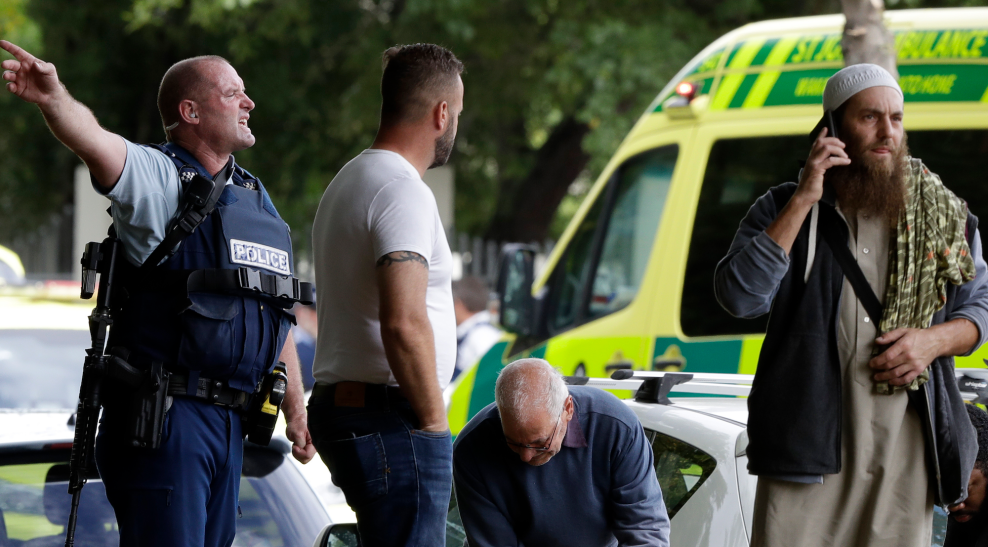 Politicians and religious leaders around the world have forcefully denounced the terrorist attacks carried out inside two New Zealand mosques on Friday, where at least 49 people were killed and dozens more injured after a gunman opened fire on worshippers during Friday prayers. The unprecedented, coordinated attacks mark the deadliest in New Zealand’s history.

“This is one of New Zealand’s darkest days,” Prime Minister Jacinda Arden said at a press conference hours after the attacks.

"This is one of New Zealand's darkest days… There is no place in New Zealand for such acts of extreme and unprecedented violence."

One man in his 20’s has been charged with murder. While law enforcement officials have not disclosed the man’s identity, a disturbing video that filmed the attack and was posted on social media has been linked to an Australian man. He reportedly wrote a manifesto explaining that he used guns in the attack to prompt political debate in the United States over the Second Amendment and expressing concern about how white supremacy is being undermined.

“The New Zealand Jewish Council has no adequate words to describe how sickened and devastated we are by the coordinated attacks on Christchurch mosques today,” the group said in a statement on Friday. “We offer our full assistance and support to the Muslim community and stand united with it against the scourge of terrorism and racism, which we must do all we can to banish from New Zealand.”

Turkish President Recep Tayyip Erdogan said that the attack demonstrated a growing hostility towards Islam. Though he did not identify specific names, Erdogan also said that some around the world have encouraged such open racism towards Muslims. “With this attack, hostility towards Islam, that the world has been idly watching and even encouraging for some time, has gone beyond individual harassment to reach the level of mass killing,” he said during a funeral for a former Turkish minister.

US lawmakers also joined to condemn the assault.

Morning (Friday) is Jummah, the weekly day of worship for our community of Muslim friends and loved ones.

Be there for them. Check in. Perhaps extend a kind gesture at your local mosque.

There is so much fear and hate.

We must negate it with active, courageous love.

Inna lilahi wa inna ilayhi raji’un. This is chilling news to wake up to. In the face of this horror, I’m mourning with, and holding our community extra close today.

We must not live in fear. I will be at Jumu’ah today and I hope others will too. Jummah Mubarak.

My heart is heavy with grief for New Zealand & Muslims worldwide affected by the tragic murders in Christchurch. The massacre of those in a house of worship, in prayer, is evil & cowardly. We stand with our friends around the world to condemn hate & speak out against intolerance.

President Donald Trump expressed his “warmest sympathy and best wishes” to New Zealand. But the tweet came hours after he had posted a link to the far-right news site Breitbart which featured a banner headline about the attack. That tweet now appears to have been deleted.

Minutes after he expressed his condolences, Trump returned to attacking Democrats by repeating his claim that the party did not respect Jewish people.