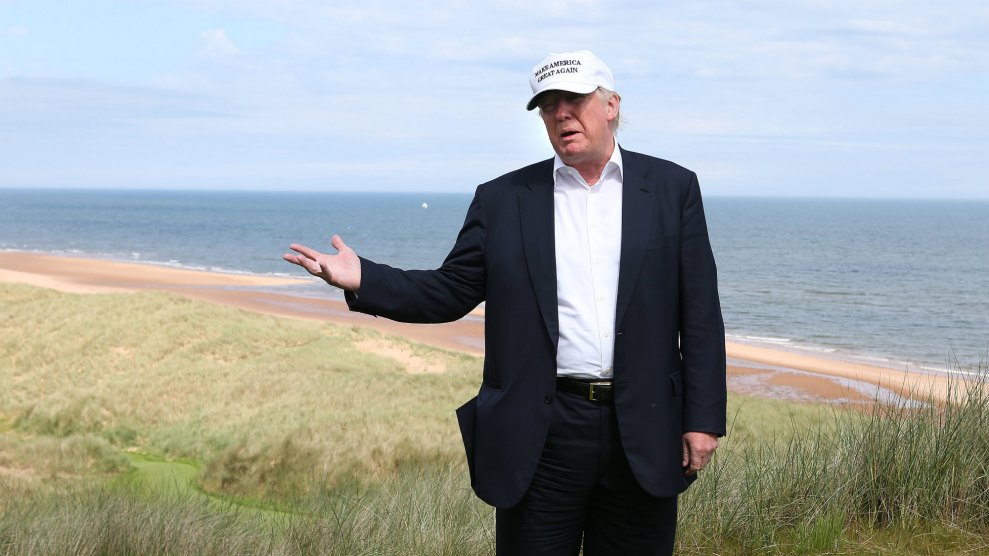 On Saturday morning, as he lashed out at his political enemies on Twitter, President Donald Trump shared a post promoting one of his Scottish golf courses with his 58.8 million Twitter followers: “Very proud of perhaps the greatest golf course anywhere in the world. Also, furthers U.K. relationship!” Trump tweeted. Trump’s tweet sparked an immediate outcry from critics who pointed to it as yet another example of Trump using the platform of the presidency to further his private business interests. But some glimpsed something more sinister in Trump’s message linking his club to international relations—a diplomatic threat.

By all accounts, the Trump International Golf Links in Aberdeen, Scotland, is indeed a beautiful and challenging course. It’s also a money pit. Trump dumped more than $60 million into purchasing and developing the property, which has bled money each year since he opened it in 2014. In other words, it could use the boost in business that a tweet from the world’s most visible Twitter account can stimulate.

The money-losing project has long been a thorn in Trump’s side. After purchasing the land for the course in 2008, Trump immediately met resistance to his plans to build a large resort on the property. He clashed with locals who rebuffed his efforts to buy their land, calling one of his opponents a “village idiot” who lived in a “pigsty” and battling local planning authorities who initially rejected the project. The golf resort was only built after Scotland’s then-first minister intervened, overruling the local government. Trump soon turned on the Scottish government, too, after it refused to block the development of an offshore wind farm that Trump claimed ruined the views from his course.

Trump unsuccessfully sued the Scottish government over the wind firm. And last week, a Scottish court ruled that he must pay the Scottish government’s legal fees. (It’s yet to be determined how much he owes.) Shortly thereafter came Trump’s tweet, which not only plugged the Aberdeen course but suggested the property was somehow part of the relationship between Great Britain and the United States.

The connection between the ruling and Trump’s tweet was not lost on observers in the UK.

“It’s hard to imagine why Trump would choose to tweet about that particular golf course on that particular day—except if the rationale was to lash out against the recent court ruling,” says Brian Klaas, a former American political consultant and an assistant professor of global politics at University College London. “Trump’s tweet explicitly and deliberately tied the fate of his Scottish golf club to the UK/US Special Relationship—an alliance that underpins NATO and the West’s international security.”

The White House did not respond to a request for comment.

The Aberdeen course is a glaring example of the conflicts of interest posed by Trump’s refusal to divest himself from his business interests. The Trump Organization’s plans to upgrade the course to include 550 luxury villas—potentially a major source of revenue for the in-the-red venture—have once again brought Trump and his company into conflict with local planning officials, who have deemed the proposal “weak.” Environmental authorities have also opposed the expansion plans. But whereas previously Trump was just a loud-mouthed real estate developer, he is now the American president. In that sense, Trump’s tweet may have captured a troubling reality: His personal business interests are indeed intertwined with American foreign policy.