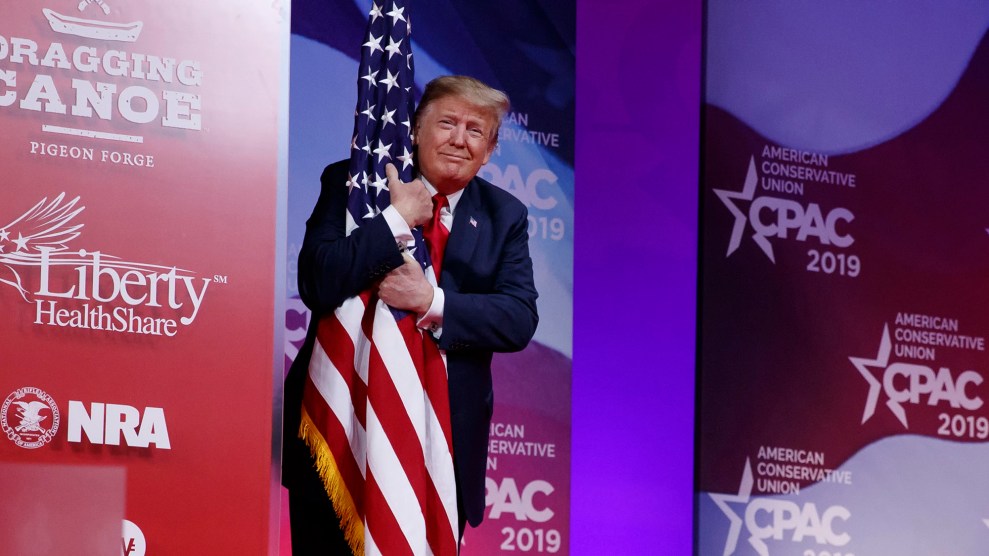 “There’s so much love in this room,” President Donald Trump said to the crowd of adoring right-wing activists who came to see him speak at the Conservative Political Action Conference in Maryland on Saturday morning. He smiled. “It’s easy to talk. You can talk your heart out.”

And so he did. In a rambling, largely ad-libbed speech that stretched over two hours, Trump veered wildly from topic to topic, slamming the Mueller investigation and related “bullshit”; mocking Democrats such as “little shifty [Rep. Adam] Schiff” and Sen. Mazie Hirono (“the crazy female senator from…Hawaii”), former Attorney General Jeff Sessions, and his other foes; riffing on trade, Syria, and health care; and hyping his 2020 reelection campaign. “You know I’m totally off-script now,” he said at one point. “This is how I got elected—by being off-script.”

Parts of the speech seemed like a preview of how he plans to frame his 2020 campaign for his Republican base. Democrats, he said, are “embracing open borders, socialism and extreme late-term abortion.” Around minute 75, Trump seemed to realize he’d already said too much. “I’m going to regret this speech,” he said, leaning into the microphone. “This speech should have been delivered one year from now—not now, damn it.”