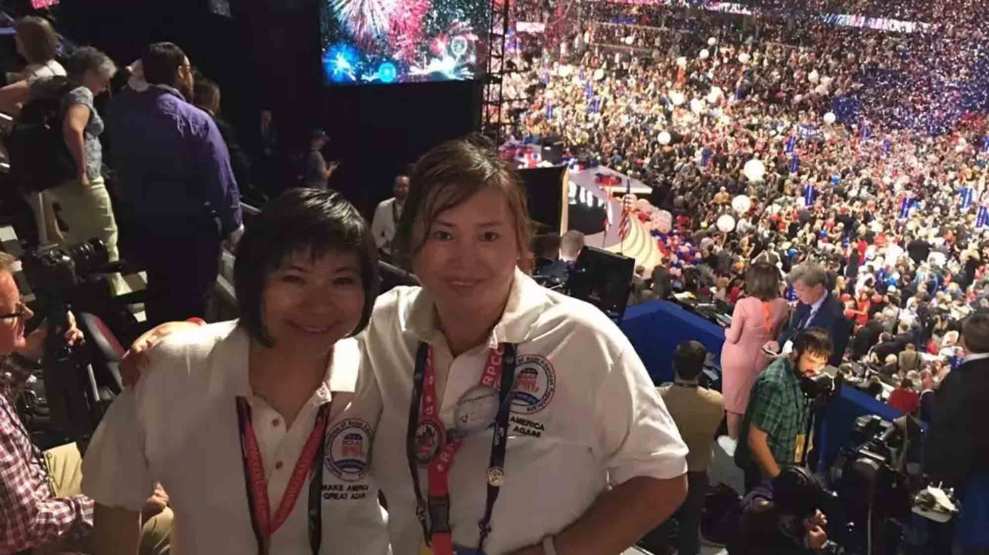 Li Yang, the Florida massage parlor entrepreneur who created and operated a business that sold Chinese business executives access to President Donald Trump and his family at Mar-a-Lago, has yet another intriguing line of work. She is an officer of two groups with ties to China’s Communist government. And she founded a Miami-based nonprofit that promotes “economic and cultural exchange” between China and the West in coordination with “senior…Chinese leaders” in the United States, according to a profile of Yang posted on a Chinese social media platform.

After Mother Jones on Saturday revealed that Yang, who goes by Cindy, had been peddling entrée to the Trump family, the Trump White House, and assorted GOP powerbrokers, national security experts noted that this situation could pose a threat, presenting opportunities for espionage or blackmail targeting the president and his inner circle. They expressed concern the Yang’s efforts to broker interactions with Trump and his clan could be exploited by Chinese intelligence. “Guess who else has 100% known about this from the beginning?” tweeted Susan Hennessey, a Brookings Institution fellow who previously worked as a National Security Agency lawyer. “Chinese intelligence services.” Samantha Vinograd, a CNN national security analyst who worked for the National Security Council during the Obama administration, noted: “Our intel community has said China poses one of the most significant counterintelligence challenges—my money is on the Chinese Govt having at least picked up on [Yang’s] access if they didn’t direct it.”

No direct evidence of any such activity has yet emerged. When Mother Jones tried to reach Yang at different phone numbers, each time a man answered the phone, said he did not speak English, and hung up. And Yang did not respond to emails. White House spokeswoman Sarah Sanders did not respond to questions about security issues raised by Yang’s access. But these apparent links between Yang and Chinese government-related entities will likely fuel concerns that Yang’s actions could have a foreign influence or intelligence angle.

Prior to the 2016 presidential campaign, Yang, who emigrated to the United States from China about 20 years ago and who once worked as a journalist for a Chinese-language television network covering Silicon Valley, had no political profile. She and her family owned and operated a chain of Florida massage parlors, including the one where New England Patriots owner Robert Kraft was busted last month for soliciting prostitution. (Yang sold that particular spa around 2013, but her family continues to own massage parlors, including several that have a developed “a reputation for offering sexual services,” according to the Miami Herald. Yang has denied violating the law.) During the 2016 election, Yang dove aggressively into presidential politics, first helping to organize events for former Florida governor Jeb Bush before throwing her support behind Trump.

According to the profile of Yang that appears on the Chinese-language site Freewechat—which compiles posts from the Chinese social media platform WeChat—she was invited in 2016 “to serve as a member of the National Committee of the Asian American Republican Party.” The story notes that Yang was also tapped for senior roles in two other groups focused on China-related issues: the Florida branch of the Council for the Promotion of the Peaceful Reunification of China (CPPRC) and the Miami chapter of the American arm of the Chinese Association of Science and Technology. Both organizations have direct links to China’s Communist Party, and the CPPRC has been described as a vehicle for projecting Chinese influence in the West.

According to the Jamestown Foundation, a conservative think tank, the CPPRC, which advocates for China absorbing Taiwan, has affiliated chapters throughout the world. This organization, the think tank says, “maintains numerous branches in the United States, including chapters in New York, San Francisco, and other major cities. The national headquarters branch in the United States is the National Association for China’s Peaceful Unification (NACPU), located in Washington, D.C.”  It adds, “The organization also takes pains both within China and without to present itself as one that represents broad sections of Chinese society outside of the Communist Party… However, such statements are misleading, and a cursory examination of the organization’s leadership structure reveals that the CPPRC is directly subordinate to the Communist Party’s United Front Work Department.” In July, the Daily Beast reported, “‘Peaceful reunification associations’—the term refers to Beijing’s intent to obtain sovereignty over Taiwan—have a close relationship with the [Communist Party’s] United Front Work Department, in some cases functioning almost as an extension of its Overseas Chinese Affairs Office.”

In June 2016, Yang participated in the founding of the Florida China Peaceful Reunification Promotion Association, and she is pictured in photographs of its inaugural meeting, which was attended by China’s Houston-based consul general and deputy consul general. According to China News, which covered the event, the Overseas Chinese Affairs Office of the State Council of China sent a message congratulating the group on its founding. Yang, according to the profile posted on Freewechat, was named a Vice President of the organization.

In 2015, Yang formed a charity, initially called the Overseas International Female Organization (its name was subsequently changed to the Women’s Charity Foundation), stating in its incorporation records that its mission was to promote “cultural and economic exchange between China” and the West. The Freewechat profile of Yang notes that this organization, which does not appear to have nonprofit status, was formed jointly with “senior overseas Chinese leaders,” which seems to be a reference to leaders of the Chinese-American community. The year the organization was founded, Yang, as its representative, was invited to attend the welcoming ceremony for three Chinese warships that docked in Florida along with the Chinese ambassador to the United States and China’s Houston-based consul general.

Yang has justifiably drawn scrutiny as a Trump donor who tried to cash in on her connections within the Trump-GOP cosmos, raising questions about whether she was working with people in Trump’s orbit. Her involvement with groups connected to the Chinese government and the Communist Party prompt additional questions about her activities.