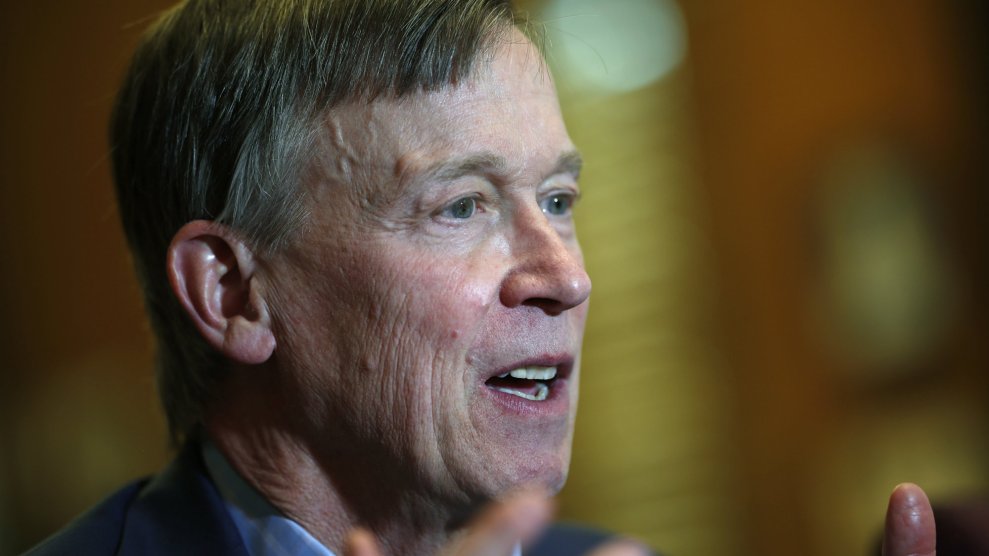 In December 1993, 19-year-old Nathan Dunlap, who had recently been fired from a Chuck E. Cheese restaurant in Aurora, Colorado, shot five of his former colleagues—only one survived. The public was shocked by the gruesome and senseless nature of the murders in a setting typically associated with children’s birthday parties. Dunlap was sentenced to death at his trial in 1996 and was scheduled to die in August 2013. But then-Gov. John Hickenlooper issued a “temporary reprieve” that halted the execution a few months before, and Dunlap remained in death row limbo for all of the governor’s second term.

“He was torn,” Philip Cherner, a retired Colorado lawyer who represented Dunlap at the time tells Mother Jones about the Democratic governor’s decision to halt the execution. “He rightly believed that if he let [the execution] go forward, it was tantamount to going down to the Department of Corrections and sticking the needle into the defendant himself.” Hickenlooper finished his second term without lifting the reprieve on Dunlap and without commuting his sentence to life, effectively making Nathan Dunlap’s case Democratic Gov. Jared Polis’ problem. Now, the two-term former governor has joined the growing list of Democrats vying for the White House in 2020 and his failure to commute Dunlap’s sentence in the era of criminal justice reform will likely play a role in his campaign.

Because capital punishment is a state-level issue, it doesn’t feature prominently in presidential elections and, according to experts, can alienate voters. “Why bring it up if it’s going to stir the pot if you don’t have to?” Sherry Bebitch Jeffe, senior fellow at the University of Southern California’s Sol Price School of Public Policy told the Guardian in 2016. But President Trump has made it a central part of his campaign and presidency, and anyone running against him will have to take a firm stance on the issue.

Hickenlooper was facing a tight reelection bid when the issue of Dunlap’s fate came to head. During his first campaign for the Governor’s seat in 2010, he said that he supported the death penalty in general. Then in 2013, he said he had a change of heart regarding this case after finding out new information with respect to Dunlap’s mental illness and the cost of capital punishment. He was neck and neck in the polls with Bob Beauprez, his Republican opponent, who explicitly campaigned on executing Nathan Dunlap. And while polling at the time showed that 67 percent of Coloradans disagreed with his decision on Dunlap, Hickenlooper defeated Beauprez, 49 to 46 percent, in what was generally a tough election year for Democrats. Given Beauprez insistence on capitol punishment, the 2014 governor’s race ended up also being a referendum on Nathan Dunlap and Colorado’s death penalty. “At four or five in the morning, when I knew that Hickenlooper was going to get re-elected, I started to cry,” Cherner says. “I knew my client was going to live another four years.”

Nathan Dunlap was not at all a sympathetic character at his 1996 trial. While he had suffered cruel and unimaginable abuse his entire life and was likely experiencing the early manifestation of his mental illness, the jurors who sentenced him to death hadn’t heard any of this evidence. Immediately after being detained for the murders, Dunlap displayed bizarre behavior and a judge sent him to the Colorado Mental Health Institute at Pueblo—where doctors said he was experiencing mania and psychosis but was competent to stand trial. His trial lawyers did not introduce any of this evidence. When Dunlap was sentenced to death, he shouted profanities in an angry outburst at the victim’s families after one accused him of hating white people.

According to Dunlap’s clemency petition, he was sexually abused by his mother and physically abused by his father. Bipolar disorder, which can be hereditary, was prominent in his family. When he was 14 years old, Dunlap tried to commit suicide and during his psychiatric evaluation when incarcerated, he demonstrated signs of hypomania, a characteristic of bipolar disorder. From 1996 to 2006, Dunlap’s behavior in prison was marked by cycles of delusional and bizarre behavior, depression, a suicide attempt, and disciplinary write-ups, according to his clemency petition. But after finally being diagnosed with bipolar disorder in 2006 and taking medication, he has had no manic or depressive episodes or disciplinary write-ups. Years later, in 2012, three jurors said they may have voted for a life sentence had they known Dunlap suffered from a mental illness. Now, it’s up to Gov. Jared Polis to decide if Dunlap’s sentence should be commuted or if he should be executed.

“Colorado’s system of capital punishment is imperfect and inherently inequitable.”

Hickenlooper’s statements after announcing the temporary reprieve in 2013 for Dunlap indicated that he was inclined to commute the defendant’s sentence. “Colorado’s system of capital punishment is imperfect and inherently inequitable,” he said at the time. There are only three people on death row in Colorado; they are all black men who come from the same high school. “We’ve had our share of heinous crimes in the state,” Dave Sabados, the executive director of Coloradans for Alternatives to the Death Penalty says. “And certainly we’ve seen white defendants all get life in prison whereas these three African-American men all received death sentences.”

But over the next four years of his second term, Hickenlooper failed to take action on Dunlap. “I had good reason to hope that he would take some action between the reprieve and the time he left office,” Cherner says. “I think Dunlap deserved that. The victim’s families deserved that and the public deserved it.” Hickenlooper, who had presidential aspirations back in 2014 and is widely seen as a moderate, appears to have been trying to walk a very careful line by attempting to appeal both to supporters of the death penalty and those who want to see it abolished.

Right now, Colorado is considering repealing the death penalty, after going more than 20 years without executing an inmate. Supporters of the bill say it’s a moral issue, but the victims’ families are worried the process is being rushed. “Nobody has reached out to the victims in these cases,” said Bobby Stephens, the lone survivor of the Dunlap shootings at a hearing for the bill. “This decision is so important that it goes beyond any of us in this room.”

In the four decades since the US Supreme Court reinstated the death penalty, Colorado has only put to death one inmate. In 1997, Gary Lee Davis was executed by lethal injection for the kidnap, rape, and murder of Virginia May. An outright repeal of the death penalty is a move that Polis has said he would support. But there’s a catch. The bill currently being considered by the state Senate Judiciary Committee only repeals the death penalty for crimes charged on July 1, 2019 or after. If the bill passes the legislature and signed into law, Nathan Dunlap will still be facing execution.

At his first rally for the presidential campaign in Denver, Hickenlooper boldly expressed his vision and his approach. “Being a pragmatist doesn’t mean saying no to bold ideas,” he said. “It means knowing how to make them happen.” But for Nathan Dunlap, the former governor’s pragmatism has come too late. “He didn’t make a final decision.” Cherner says of Hickenlooper. “But my former client is still alive and that’s a big deal.”