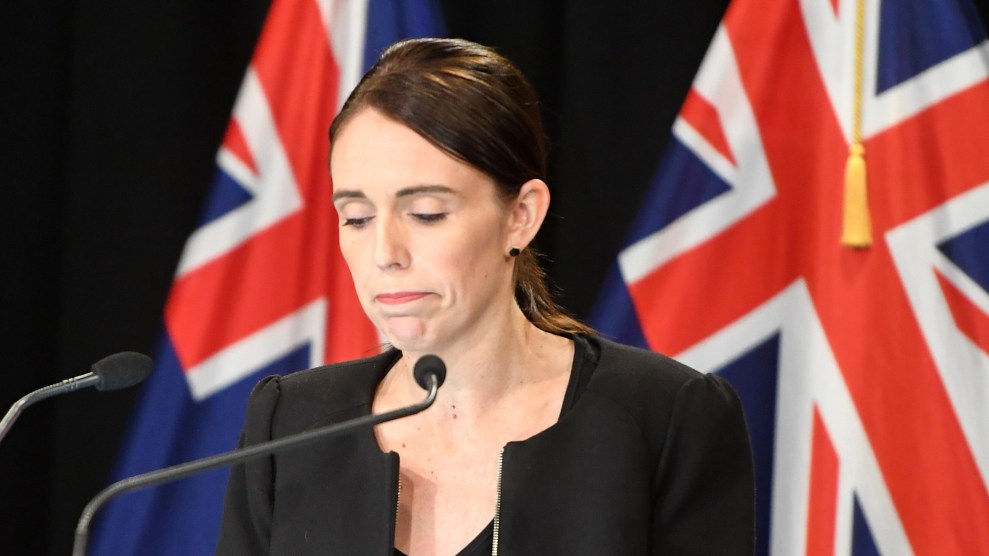 Less than a week after a deadly terrorist attack on two New Zealand mosques, New Zealand prime minister Jacinda Ardern declared an immediate nationwide ban on assault weapons and high-capacity ammunition magazines. While the New Zealand parliament is expected to quickly pass legislation to the same effect, Ardern relied on executive powers in order to halt any efforts to stockpile the weapons before they were forbidden.

New Zealand officials have singled out these firearms and accessories because they were the weapons of choice in last week’s massacre that left 50 people dead. They’ve also played a major role in America’s high-profile mass shootings: Their use in the 2012 Sandy Hook Elementary School and 2018 Marjory Stoneman Douglas High School massacres enabled gunmen to rapidly shoot multiple lethal rounds without pause, abilities that contributed to the high casualty counts in both tragedies.

“Our priority is to work on the legislation that saves the most lives.”

In 1994, a Democrat-controlled Congress passed legislation that banned 19 specific military-style assault weapons, as well as magazines that held more than 10 rounds of ammunition. The measure had bipartisan support, but when its 10-year sunset clause took effect in 2004, neither party was eager to extend it. Republican lawmakers sided with the National Rifle Association, which made overturning the ban a top legislative priority; Democrats, meanwhile, had partly blamed their 1994 midterm losses on their gun control efforts and were reluctant to once again take up the cause. Eighteen years later, firearms once again became a matter of national debate in the wake of the Sandy Hook shooting, and then-Senate majority leader Harry Reid (D-Nev.) left an assault weapons ban out of the gun reform package he put to the Senate for a vote. The bill failed anyway.

For Democrats and some vulnerable Republican lawmakers, the political calculus on gun control has changed. Democrats rode demands for stricter gun laws into office this past November, taking control of the House of Representatives while promising to pass firearms reforms. But even as the House has prioritized legislation to expand background checks and “red flag” laws—measure that keep guns out of the hands out people who pose a risk to themselves or others—an assault weapons ban has remained off the table. And it’s not just the federal lawmakers who have shied away from it: While national gun reform organizations such as Brady, Everytown for Gun Safety, Giffords, and the March for Our Lives student activists have all expressed support for banning assault weapons and high capacity magazines, they aren’t pushing it as a top item on their legislative agendas.

There are policy reasons for this, explains Robin Lloyd, the managing director of Giffords, which has put universal background checks at the top of its wish list. Lloyd says the background checks bill, which recently passed the House, is a “foundational policy” that puts broad protections in place to help prevent people who pose a danger from accessing weapons, regardless of make or model. “It doesn’t matter if we close other loopholes if we can’t address this,” she explains.

Shannon Watts, the founder of Moms Demand Action, Everytown’s grassroots wing, tells Mother Jones that the prioritization also stems from America’s unique gun violence problem. More New Zealanders died from gun violence in last week’s massacre than the typical number of New Zealanders who die from gun violence in a given year—a bump attributable to the role assault weapons played. In America, meanwhile, more than 13,000 people die from gun violence each year, and the vast majority of those deaths involve handguns, not assault weapons. “Our priority is to work on the legislation that saves the most lives,” Watts says. “We know what will help stop the most deaths the quickest will be a background check law.”

But the biggest roadblock has been a political landscape that has been inhospitable to even modest gun reform measures. Democrats’ successes at the ballot box last fall have measurably changed few Republican minds: Only eight GOP House members voted for the universal background checks bill last month, and Senate Judiciary Chairman Lindsey Graham (R-S.C.) has declared that measure dead on arrival in the upper chamber.

While gun control activists have made some progress with the GOP-held Senate—Graham has agreed to hold a hearing on red flag laws next week—an assault weapons ban remains a non-starter. Existing measures sponsored by Sen. Dianne Feinstein (D-Calif.), Rep. David Cicilline (D-R.I.), and Rep. Ted Deutch (D-Fla.) that attempt to ban or strictly regulate assault weapons have only attracted Democratic support, and there are no current plans to bring them up for hearings or markups.

Gun reform activists are supportive of these measures, but they don’t see a lot of opportunity for successful advocacy around them.“You can only work on the laws that come up,” Watts explains. “There isn’t an assault weapons ban that’s moving at the federal level.”

House Judiciary chairman Jerry Nadler (D-N.Y.) has promised that his committee will take up more gun measures later this year. He has not said whether an assault weapons ban will be among them.