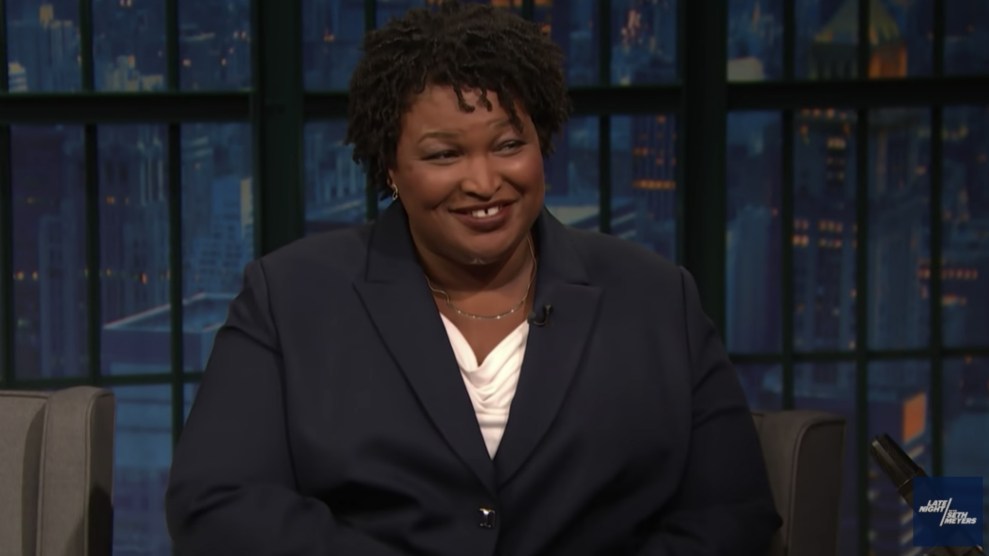 The internet is buzzing with speculation that former Vice President Joe Biden will soon announce his presidential candidacy and tap rising Democratic star Stacey Abrams to be his running mate, as suggested by a CNN report earlier this week and stated a bit more explicitly in an Axios story Thursday. Jonathan Chait at New York Magazine thinks it’s a “brilliant idea.” Eric Lutz at Vanity Fair thinks the ticket could “save Biden from himself.” But there are a few things curiously missing from the mix, namely Abrams herself and what she thinks of this plan—and, more importantly, what she thinks of Biden.

Abrams’ historic but unsuccessful gubernatorial run in Georgia last year overlapped with the rise of the #MeToo movement, and when asked in a recent interview with Marie Claire if she had her own story to share, Abrams pointed to Anita Hill. She explained how formative it was to watch Hill be grilled about sexual harassment by an all-white male panel of senators, led by the one and only Joe Biden, then the senator from Delaware and chair of the Senate Judiciary Committee.

“I remember the Anita Hill hearings vividly, watching those men in power deny her humanity,” Abrams told the magazine. “So to see women in this moment—especially in light of who occupies the White House—refuse to be dissuaded from demanding their equality, agency, and equity is a testament to the resilience we possess.”

Abrams was a freshman at Spelman College in Atlanta in October 1991 when Hill, then an unknown former employee of the Equal Employment Opportunity Commission, testified before the Senate Judiciary Committee that she had been sexually harassed by Clarence Thomas, George Bush’s pick to replace Thurgood Marshall on the Supreme Court.

Abrams was an activist on campus. In 1992, she was photographed with a group of students burning the Georgia state flag, which at the time included a not-so-subtle nod to the Confederacy:

Stacey Abrams defends presence at 1992 protest burning of state flag containing Confederate symbol
Abrams was a freshman in college at the time.>>>https://t.co/CQw1C240Q3 pic.twitter.com/BViA7LGD9R

Later, when administrators closed the campus to quell protests in the aftermath of the videotaped beating of Rodney King, Abrams organized students to call local TV and radio stations to get out their perspective, and the campaign even led to her having a tense showdown with then-Mayor Maynard Jackson.

While it’s unclear if Abrams was involved in any activism surrounding the Thomas hearings, it seems just the kind of thing that would have sparked a fire for her at the time. And while Biden’s questions weren’t the worst of the panel—Sen. Howell Heflin, a Democrat from Alabama, probably deserves a top spot there when he asked, “Are you a scorned woman? Do you have a militant attitude relative to the area of Civil Rights?”—as committee chair, he didn’t do much to blunt the attacks that came Hill’s way, and he also failed to call witnesses who could have supported Hill’s allegations. Hill isn’t holding her breath for an apology, but Biden has expressed some regret publicly about how he handled the whole ordeal, telling NBC in 2018: “Anita Hill was vilified when she came forward by a lot of my colleagues. I wish I could have done more to prevent those questions and the way they asked them.”

What’s more, Abrams has risen to national prominence by proudly embracing her identity as a black woman—her natural hair, her gap-toothed smile, her self-described “sturdy” build. She grew up working-class and isn’t married, and has become something of a model for women of color who want to build a political profile based on authenticity and an explicit rejection of norms that often center on white men. She ran a gubernatorial campaign in Georgia that upended traditional electioneering; she ran Spanish-language ads, held forums with LGBT communities, and wound up tripling turnout for Asian-American and Latino voters, while turning out more black voters than the sum total of Democratic voters who went to the polls in Georgia in 2014. She wowed the country with her State of the Union response and even earned praise from Fox News pundits. It makes sense that every Democratic presidential hopeful is courting her in some capacity.

But with Biden, it’s hard not to wonder if the feeling is mutual. We won’t really know until Abrams says something herself to either confirm or deny speculation about her future as a VP, or even as a presidential candidate herself. And, after all, she didn’t mention Biden by name to Marie Claire. But given how she’s built her national profile, and how the years of her college activism seem to have shaped her, it’s hard to believe that Abrams wouldn’t consider the complicated optics of teaming up with Biden.