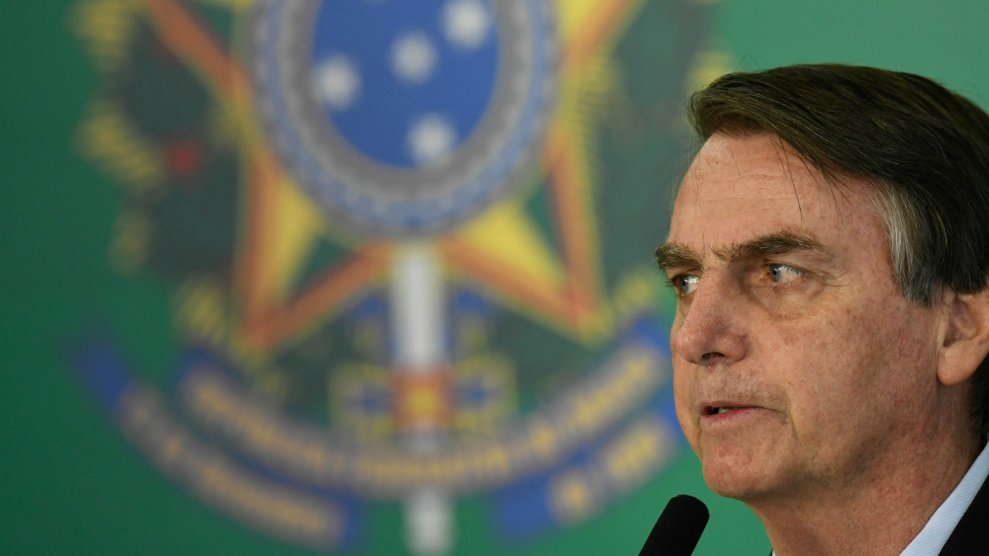 On Tuesday, he is meeting with another avid Twitter user, President Donald Trump, for a summit that is all but certain to cement the strange new alliance between the two largest economies in the Western Hemisphere.

Since his election, Trump has been in the business of wrecking alliances, not forming new ones. He has mocked French President Emmanuel Macron over the ongoing “yellow vest” protests, called Canadian Prime Minister Justin Trudeau “meek and mild,” and tossed Starburst candies toward German Chancellor Angela Merkel during a G7 summit, remarking, “Don’t say I never give you anything.”

But in Bolsonaro, the ultra-conservative leader of Brazil, Trump may have found a kindred spirit. The two lavish praise on each other through their preferred medium, Twitter, and share a deep “mutual respect,” a senior administration official told reporters on a conference call this week.

Even their tweets read similarly. After Bolsonaro landed in Washington, he posted a message with all the trappings of a Trump tweet: an attack on journalists, whom he called “evil”; a reference to the booming stock market; and a nationalist motto, BRAZIL ABOVE ALL, a nod to Trump’s “America First.”

While the two share many stylistic and substantive similarities, Bolsonaro is not new to politics, as Trump was during his presidential campaign in 2016. As a lawmaker from Rio de Janeiro, he carved out a notorious reputation for making bigoted statements about women, LGBTQ people, and other minority groups. He has repeatedly defended violence by state actors, advocated for a dictatorship, and, in a strange pivot by the standard of Brazilian politics, strongly aligned himself with the United States.

“During some campaign rallies, more than once, he had the US flag—not the Brazilian flag, but the US flag—lifted up, and the US national anthem would play and he would stand in salute,” says Fernando Cutz, who formerly served in the National Security Council under Trump and President Barack Obama. “He was running to be president of Brazil. It was wild.”

A shared emphasis on countering China and Cuba, opposing environmentalism, and cultivating support among evangelical Christians has laid the groundwork for Bolsonaro and Trump’s burgeoning bromance. “For the first time in a long time, a Brazilian President who is not anti-American arrives in Washington,” Bolsonaro tweeted Sunday. Upon his arrival, he granted an interview to Trump’s favorite network, Fox News, gave a speech to the Chamber of Commerce, and even stopped by the CIA, which his son, Eduardo, called “one of the most respected intelligence agencies in the world.” (Among the disclosures made by whistleblower Edward Snowden was evidence of a widespread American spying operation in Brazil.)

Eduardo, himself an elected legislator, has been a focal point in Brazil’s outreach to Trump and his allies. During visits to the United States last year, he met Donald Trump Jr. at a Las Vegas gun show, showed off a “Trump 2020” hat, and took photos with Jared Kushner and Sen. Ted Cruz (R-Texas).

The younger Bolsonaro took a particular liking to Steve Bannon, the former White House chief strategist who now advises European nationalists on how to replicate the Trump model abroad. Last month, he joined Bannon’s official populist movement as a representative for Latin America, so it was little surprise when on his father’s visit to the Brazilian embassy for a dinner on Sunday, Bannon was a guest of honor.

The warm nature of Bolsonaro and Trump’s relationship may result in some tangible policy gains for both sides at the summit, beyond what the US senior administration official touted as “a historic remaking of the US-Brazil relationship.” As part of that realignment, Bolsonaro has hinted at an agreement to allow the United States to use Brazil’s Alcântara Launch Center to launch rockets and satellites. The base occupies a key location near the equator that could help attract commercial space investment. Trump may also sign off on “a $100 million fund for small businesses operating in the Amazon region,” according to a report in the Intercept. He is not expected to announce American support for Brazil’s entry into the Organization for Economic Cooperation and Development (OECD), which US officials had long opposed.

Other topics of conversation will undoubtedly include Venezuela, where Bolsonaro and Trump have both pushed for the ouster of President Nicolás Maduro, and trade, an issue of intense interest to both parties looking for a relaxation of restrictions on Brazilian beef and US wheat.