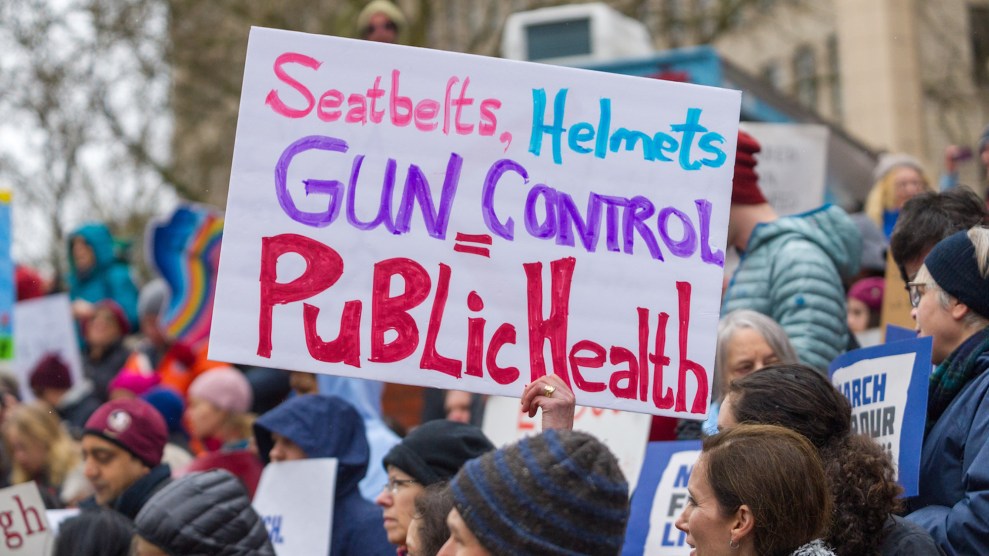 Protesters demand gun control during the March for Our Lives on March 24, 2018, in Portland, Oregon.Diego Diaz/Sportswire/AP

A year after the Parkland massacre sparked widespread demands for more research into the causes of gun violence, Republicans are still reluctant to give scientists funding to study the issue. At a House hearing Thursday, GOP members repeatedly resisted arguments that Democrats and their witnesses put forth in favor of Congress specifically appropriating funds for the Centers for Disease Control and Prevention to study the issue, something the agency has not done voluntarily in nearly a quarter-century.

It was the first hearing that the House Appropriations Committee’s subcommittee on labor and health and human services has held on the subject since 1996, which was the year that former Rep. Jay Dickey (R-Ark.) sponsored a National Rifle Association-backed amendment that prevented government funds from being used to “advocate or promote gun control.” While the rider didn’t ban research on gun violence explicitly, it severely discouraged it. That year, Congress scrapped the $2.6 million it had earmarked for that purpose, and since then, there’s been virtually no federally supported gun violence research, a circumstance that’s made it difficult for scientists to draw any conclusions about the causal relationship between public policy and safety outcomes.

That spending freeze looked as though it might thaw in the wake of the 2018 shooting at Marjory Stoneman Douglas High School in Parkland, Florida. The day after the shooting, Alex Azar, President Donald Trump’s health and human services secretary, told a House subcommittee that he did not believe the Dickey amendment impeded research on gun violence and that he would “have our agency certainly working in this field.” As part of last year’s spending bill—approved in the weeks after the Parkland massacre—the GOP-controlled House and Senate signed off on language that clarified that the CDC is not prevented from conducting research on the root causes of gun violence. Republican lawmakers, like Sen. Marco Rubio (R-Fla.), seemed open to the idea of sending some money the CDC’s way.

But that openness was harder to find in today’s House appropriations hearing, as Republican lawmakers laid out numerous arguments as to why that money wouldn’t be well-spent. Rep. Tom Cole (R-Okla.), the subcommittee’s ranking member, worried that the funding would be used to build a political case for stricter gun control measures. “The money we spend needs to make a difference, not just prove a political point,” Cole said.

Cole also raised questions about how trustworthy any research on the subject would be, wondering at one point if “in some cases, the views of researchers clearly influence their research product.” Andrew Morral, a behavioral scientist with the RAND Corporation who testified at the invitation of Democratic lawmakers, argued that the work of peer-reviewed researchers is not inherently biased; it’s that the policy analysts and the special-interest groups that employ them, like the NRA and Everytown for Gun Safety, come to different, sometimes poorly informed conclusions based on the limited research before them. Morral explained that there is a “huge divide on what they believe the truth probably is” because the gaps in data are vast, leaving ample room for interpretation

“We know so little about these central questions relevant to individuals who commit violent crime with guns and how they obtain their firearms.”

For their witness, GOP lawmakers invited John Lott, a researcher who often appears at the behest of gun rights activists and has been widely criticized for his publications on gun violence. Lott argued that there’s plenty of statistical data available to anyone who wanted to study gun violence and that there was no need to spend any additional money on collecting more, a point with which the Democratic witnesses vehemently disagreed. “We know so little about these central questions relevant to individuals who commit violent crime with guns and how they obtain their firearms,” said Daniel Webster, the director of the Johns Hopkins Center for Gun Policy and Research.

Rep. Andy Harris (R-Md.) argued that it wasn’t the role of Congress to earmark the funding—though prior to the Dickey amendment, it had—noting that the CDC was free to spend its currently allocated research money however it chose. “We don’t restrict the NIH [and CDC] from any amount of research,” Harris said. “They could spend a billion dollars on it—they just choose not to.” While technically accurate, researchers have noted that the CDC has chosen not to voluntarily spend its research funding on the subject because of the ambiguity imposed by the Dickey amendment’s requirements.

But at the hearing’s end, Republicans stopped short of completely shutting down the possibility. “If you’ve got some legitimate ideas, go out there and do it,” Cole said. “We’re not trying to stop you from researching.”

Despite the general resistance, Rep. Barbara Lee (D-Calif.), who represents Oakland, an urban community that regularly experiences the trauma of everyday gun violence, says the conversation left her feeling hopeful. “I think they were listening,” she tells Mother Jones of her Republican colleagues. “Now we have a chance to move forward to declare a public health emergency and fund this. I think that’s more realistic now, and I think this hearing really laid out a lot of the facts.”

Lee, like her fellow Democrats, would like to see gun violence treated as an emergency, much in the same way the Trump administration has chosen to combat the opioid epidemic. “In 2017 alone, guns killed nearly 40,000 Americans,” Rep. Rosa DeLauro (D-Conn.), the subcommittee’s chair, said in her opening remarks. “That same year, opioid overdoses killed 47,000 Americans. We have dedicated immense public dollars, especially in this subcommittee, to addressing and examining one, but not the other.”

In a Democrat-controlled House, there’s little question that funding for the CDC to perform such research would find its way into the House’s spending bill. But the Republican-controlled Senate must also sign off on appropriations. Last summer, Senate Majority Leader Mitch McConnell (R-Ky.) said he believed the only role of the federal government in addressing gun violence was through the appropriations process. What his position means for funding gun violence research remains to be seen.