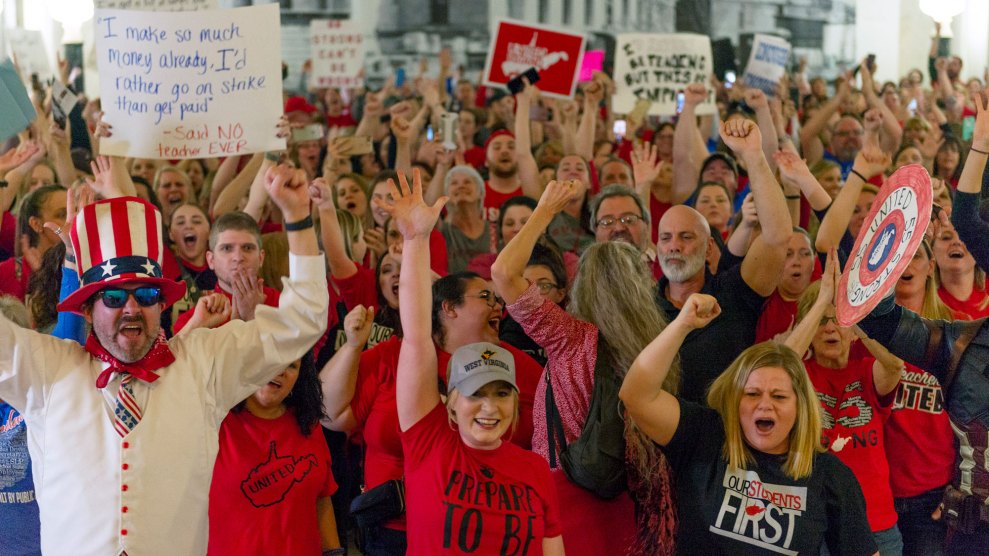 Teachers and school personnel celebrate after the House of Delegates postpone a vote on Senate Bill 451 indefinitely at the state Capitol in Charleston, West Virginia, during a statewide teachers' strike.Craig Hudson/Charleston Gazette-Mail/AP

On Monday night, West Virginia teachers’ unions called for a statewide strike. They decided to walk out to protest a sweeping education bill in the state Senate that would have both sent public money to pay for private school costs and established charter schools—a bill educators saw as retaliation for sparking a national movement in states like Arizona and Oklahoma nearly a year ago, when they walked out for nine days to demand higher pay. Superintendents from all but one of the state’s counties closed schools Tuesday.

But following several hours of teachers picketing at the state Capitol on Tuesday morning, the state’s House of Delegates voted to table the bill “indefinitely,” effectively killing it and delivering a win to teachers.

“Your voices have been heard, and your voices will continue to be heard,” said Fred Albert, president of West Virginia’s chapter of the American Federation of Teachers. “Don’t ever think that your voice does not matter, because this is proof that when you get active and you make your voice heard, it does make a difference.”

The situation in West Virginia quickly escalated after the Republican-led Senate tweaked a far-reaching omnibus House bill to include an education savings account program that would’ve allowed parents of students with disabilities or victims of bullying to get public money to pay for private school tuition and other costs. (It also created up to seven charter schools throughout the state.) A House version of the bill didn’t include the savings account program provision and would have put a limit on charter schools to two counties.

The pushback from teachers and school employee unions was swift. Dale Lee, president of the West Virginia Education Association, told reporters Monday night that the state Senate’s actions made it seem like they were “more interested in listening to the outside interests than they are the educators across West Virginia.”