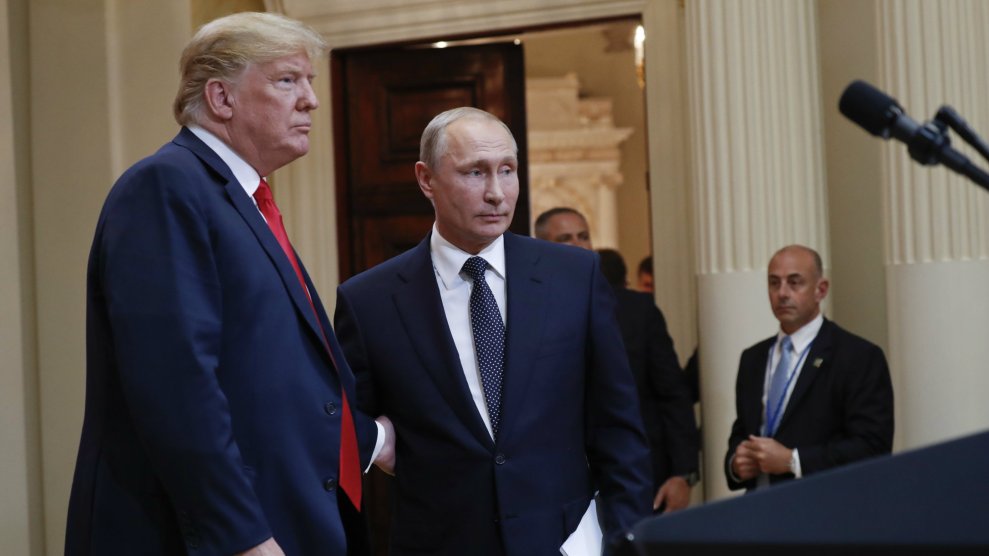 On December 8, 1987, President Ronald Reagan stood beside Russian leader Mikhail Gorbachev in the East Room of the White House and signed one of the most consequential treaties of his presidency, which led the world’s two superpowers to voluntarily eliminate hundreds of short-range nuclear missiles.

Thirty-one years later, President Donald Trump, who has called himself “far greater than Ronald Reagan,” blew up his Republican forerunner’s major foreign policy accomplishment. The White House announced Friday it was suspending the Intermediate-Range Nuclear Forces treaty because of repeated Russian violations. “Enough is enough,” the administration said in a statement. Russia removed itself from the agreement one day later, essentially rendering the agreement null and void if diplomats are unable to save it within six months.

Trump’s decision to abandon the treaty accelerated concerns from Democrats and nonproliferation advocates about the likelihood of another arms race, and, almost immediately, lawmakers introduced a swath of bills intended to limit the president’s near-unilateral ability to deploy nuclear arms. But it did not come as a surprise. US officials had privately accused Russia of violating the treaty’s ban on ground-based, intermediate-range missiles as early as 2013. The Obama administration leveled this charge publicly in a 2014 report, but US allies were more concerned at the time with another Russia-related headache: the country’s annexation of Crimea. Without making public explicit evidence that Russia violated the treaty, American leaders struggled to wrangle Russia into compliance late in Obama’s second term. “Let me be clear: we made no progress,” Alexandra Bell, a former official in Obama’s State Department, told Mother Jones.

In November, Director of National Intelligence Dan Coats finally put the backing of the intelligence community behind allegations of Russian noncompliance. In a press conference, he identified by name the cruise missile reportedly in violation of the treaty and outlined a timeline of American outreach to Russia. “We believe Russia’s objective was to keep the United States constrained while it quietly built and deployed a force of illegal missiles that threaten Europe,” he said.

It might seem strange for a president with several associates under investigation for improper ties with Russia to suddenly adopt a hawkish stance toward Moscow, but Trump and his advisers, especially National Security Adviser John Bolton, had been telegraphing this decision for months. While campaigning in Elko, Nevada, during the run-up to the midterm elections, the president told reporters that Russia should not be allowed to “do weapons” that “we are not allowed to.” He added, “We are going to terminate the agreement.” As early as September 2014, when Bolton was a senior fellow at the American Enterprise Institute, he disparaged the agreement as “obsolete,” writing in the Wall Street Journal, “Maintaining international security requires that the US have access to the full spectrum of conventional and nuclear options.”

“John Bolton is a serial arms-control treaty killer. He believes in the brute-force approach to strategic relations.”

It’s Bolton who many observers single out as the brains behind this move, given his historic opposition to arms control treaties of any kind. “John Bolton is a serial arms-control treaty killer,” Joe Cirincione, president of the Ploughshares Fund, a foundation that advocates against nuclear proliferation, told Mother Jones. “He believes in the brute-force approach to strategic relations.”

Abandoning the treaty gives Bolton a major policy win, but it also plays into a realignment of the administration’s national security priorities that predates his tenure. Gone are the days where stateless actors like al Qaeda and ISIS dominated the attention of military leaders. Under former defense secretary Jim Mattis, the Pentagon oriented its strategy toward competition with Russia and China. The defense establishment in Washington has been especially preoccupied by China as a national security threat. As Mattis’s successor Patrick Shanahan reportedly said upon taking over last month, his top priority as Pentagon chief is “China, China, China.” Even as the US and Russia have stockpiled more than 90 percent of the world’s nuclear weapons, China’s growing capacity as a global rival has animated the White House’s approach to Cold War treaties that were signed in an era when the Soviet nuclear weapons had been the only conceivable existential threat to Europe and the United States.

Those memories are not lost on European leaders either. While a NATO statement released after Trump’s exit largely adopted the American stance that “Russia will bear sole responsibility” for the treaty’s demise, other European leaders were less restrained. “What we definitely don’t want to see is our continent going back to being a battlefield or a place where other superpowers confront themselves,” European Union foreign policy chief Federica Mogherini said last week.

“On our side, there’s lots of incentives to get rid of the treaty—not for Europe, but for Asia,” says Jasen Castillo, an associate professor at Texas A&M University who served in the Pentagon during the George W. Bush administration. “Russia lives next to a giant factory of intermediate-range missiles called China.” That’s a viewpoint shared widely among supporters of the administration’s decision to exit the treaty, including at the highest levels of government. Elbridge Colby, who helped develop the new National Defense Strategy under Mattis, advanced a similar argument in a Washington Post op-ed. “[T]he United States no longer benefits from a ban on ground-based intermediate-range systems—but because of China, not Russia,” he wrote. “China poses a much larger and more sophisticated long-term military threat than Russia, and U.S. strike options are more constrained by the geography of the Pacific.” (A senior administration official who requested anonymity to brief reporters last week denied any undue focus on China. “For the United States, this really doesn’t have anything to do with China,” he said. “This is solely about Russia’s violation of this treaty.”)

Not all experts believe that China has the capability to become as significant a nuclear player as Russia and the US. “China is a nuclear pygmy compared to us,” Cirincione says. “But there are proposals from defense contractors and some members of the military to build new types of weapons.” Nowhere is that synthesis between government and the resurgent defense industry more obvious than in the administration’s recently unveiled “Missile Defense Review,” which highlights the threat of Russia and China at length, alongside usual boogeymen like Iran and North Korea. The long-anticipated review, which President Trump publicly promoted at the Pentagon last month, is another example of the administration’s efforts to roll back his predecessor’s initiatives, in this case the Obama-era plan to reduce the size of America’s nuclear arsenal. “The United States will not accept any limitation or constraint on the development or deployment of missile defense capabilities needed to protect the homeland against rogue missile threats,” a report summary notes.

These developments have not escaped the eye of an empowered Congress, where Democrats now control the House and several serious contenders for the party’s presidential nomination in 2020 have carved out prominent roles in the Senate. Last week, one leading candidate, Sen. Elizabeth Warren (D-Mass.), teamed up with House Armed Services Chairman Adam Smith (D-Wash.) to introduce companion bills that would eliminate the ability for the US to strike an adversary first with nuclear weapons. Those bills, coupled with similar legislation from Sen. Ed Markey (D-Mass.) and Rep. Ted Lieu (D-Calif.), demonstrate a growing desire from Democrats to rein in the president’s authority to wield nuclear weapons. “Trump’s brand is to be unpredictable and rash,” Lieu said in a statement, “which is exactly what you don’t want the person who possesses the nuclear football to be.”