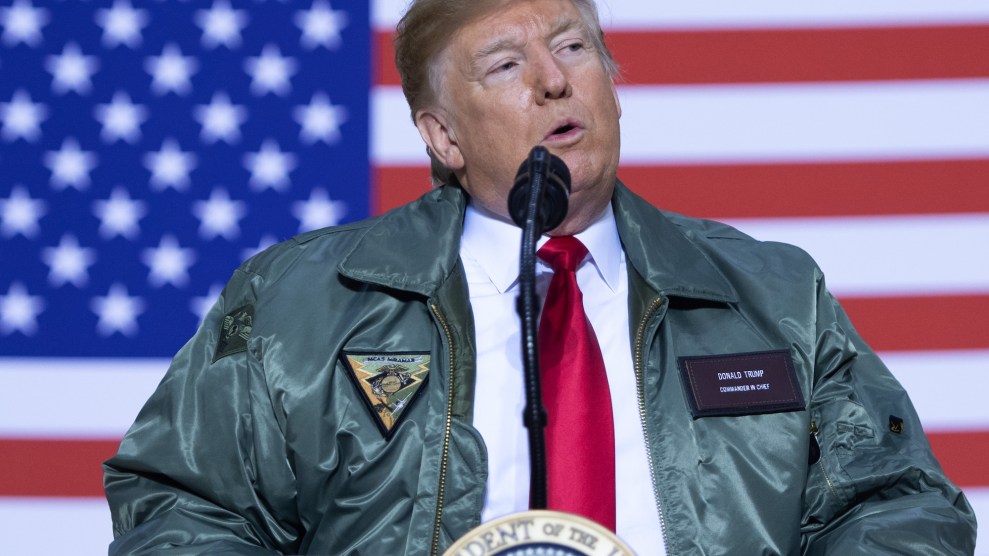 President Donald Trump said on Sunday that he is committed to pulling troops out of Afghanistan and Syria. But in at times rambling remarks to CBS’s Face the Nation, Trump also said he wants to keep US troops in Iraq to “watch Iran.”

“I want to be able to watch Iran.”

While Trump told CBS’s Margaret Brennan that the invasion of Iraq was “one of the greatest mistakes going into the Middle East that our country has ever made,” he added that he wants to keep about 5,000 US troops in the country because the US has “spent a fortune on building this incredible base. We might as well keep it…because I want to be looking a little bit at Iran because Iran is a real problem.”

“You’re keeping troops in Iraq because you want to be able to strike in Iran?” Brennan asked.

“No, because I want to be able to watch Iran,” Trump said.

Trump also said he disagreed with US intelligence chiefs’ assessment that Iran is abiding to its international agreement restricting it from building nuclear weapons. Though the United States pulled out of the agreement, it remains in effect between Iran and other parties to the deal.

“I have intel people, but that doesn’t mean I have to agree,” Trump said. “President Bush had intel people that said Saddam Hussein in Iraq had nuclear weapons, had all sorts of weapons of mass destruction. Guess what? Those intel people didn’t know what the hell they were doing, and they got us tied up in a war that we should have never been in.”

Trump defended his drawdown of troops in Afghanistan, repeatedly noting the United States has been in the country for 19 years. But he said US intelligence will watch the country prevent resurgence of terrorist groups there. ”If I see nests forming, I’ll do something about it,” Trump said.

“We’ll come back if we have to,” he added. “We have very fast airplanes, we have very good cargo planes. We can come back very quickly, and I’m not leaving.”

In the interview, Trump asserted he had fired former Defense Secretary Jim Mattis due to failures in Afghanistan. The president said that Mattis, who delivered a scathing resignation letter after Trump decided to pull 2,000 US troops out of Syria, had “resigned because I asked him to resign.”