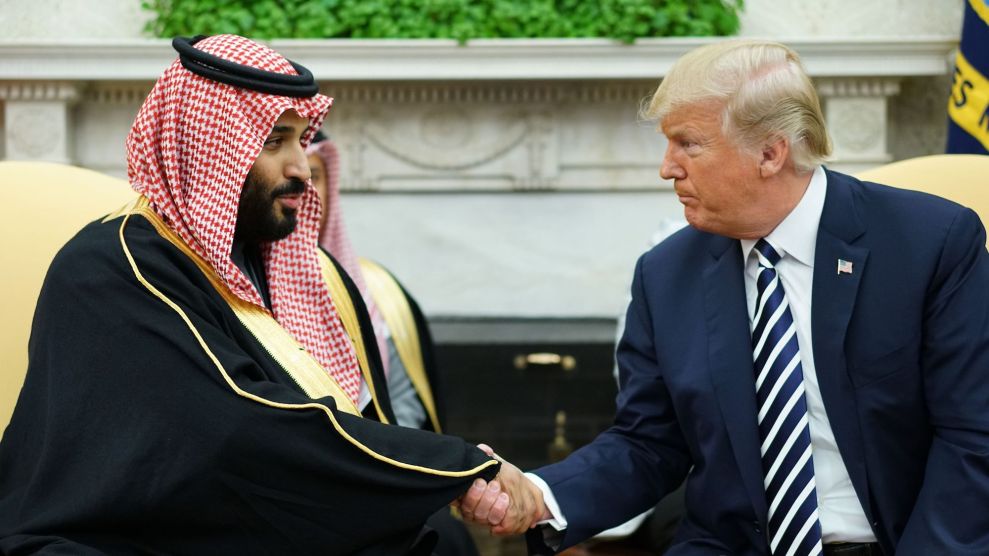 That’s the takeaway from an interim staff report released Tuesday by the House Oversight and Reform Committee, which announced a full-fledged investigation into the matter.

The report, prepared for Chairman Elijah Cummings (D-Md.), describes an effort by White House aides to help a private company formed by a group of former US generals win backing to build nuclear power plants in Saudi Arabia. It is based on accounts of unnamed whistleblowers who described to the committee their objections to a plan to give nuclear technology to the Saudis, in possible violation of federal laws and without a required review by Congress.

In what appears to have been a brazen conflict of interest in 2016, Trump campaign aide and future national security adviser Michael Flynn worked as a paid consultant for a subsidiary of the group. The firm, IP3 International, was established by retired Generals Keith Alexander and Jack Keane; retired Rear Admiral Michael Hewitt; and retired Marine Corps officer Bud McFarlane, who pleaded guilty in 1988 to withholding information from Congress while serving as President Ronald Reagan’s national security adviser. Flynn continued to push the plan after joining the White House, the committee report says.

Even after Flynn was fired from the Trump administration for lying about his contacts with Russia’s ambassador to the United States, other national security aides close to Flynn—including then-Deputy National Security Advisor K.T. McFarland, and Derek Harvey, who oversaw Middle Eastern matters on the National Security Council—continued to push it, in consultation with Flynn, despite efforts by Flynn’s successor, H.R. McMaster, and other NSC officials to kill it.

Despite media coverage of Flynn’s role and internal government turmoil over the plan, “The Administration’s efforts to transfer sensitive U.S. nuclear technology to Saudi Arabia appear to be ongoing.”

The committee report reveals that top Trump adviser and fundraiser Tom Barrack was also deeply involved in pursuing the nuclear deal. Barrack, the CEO of real estate and investment firm Colony Capital, positioned himself to oversee the effort, according to the report. Democrats suggest that Barrack hoped to benefit financially from that role, though it is not clear specifically how he might have profited.

The committee’s report says NSC officials fought the plan over concerns it was illegal, noting that it “appeared to be designed to benefit General Flynn, his former business colleagues, and Mr. Barrack, in potential violation of the federal criminal conflict of interest statute and ethics rules.”

Perhaps most astonishing, according to the report, is that despite media coverage of Flynn’s role and internal government turmoil regarding the plan, “The Administration’s efforts to transfer sensitive U.S. nuclear technology to Saudi Arabia appear to be ongoing.” Officials from IP3 International organized a White House meeting between the president and nuclear industry executives just last week, the report says.

Meanwhile, Trump’s energy secretary, Rick Perry, has been an active, public booster of the effort. Perry told reporters in the fall that the Saudis “recently made a decision that keeps U.S. businesses—foremost Westinghouse Electric Co.—in the mix for what could ultimately become a market worth tens of billions of dollars,” according to the Wall Street Journal.

The report says the committee is concerned that Trump’s son-in-law Jared Kushner—whose real estate interests connect to a company with a stake in the proposed Saudi nuclear deals—is also backing the effort. Kushner has continued to cultivate his personal relationship with Saudi Arabia’s Mohamed bin Zayed despite the crown prince’s direct hand, according to the CIA, in the murder of Washington Post contributor Jamal Khashoggi. Kushner may try to advance the nuclear plan during an upcoming visit to Saudi Arabia and other Middle East capitals, the Democrats warn.

Flynn, Kushner, Barack, and Gates are all significant figures in the wide-ranging investigation into whether the Trump campaign conspired with Russia. Flynn pleaded guilty to lying to the FBI about his Russia contacts and agreed to cooperate with special counsel Robert Mueller. Kushner tried to set up a secret back channel to the Kremlin during the presidential transition; attended the now-infamous June 2016 Trump Tower meeting with Russian operatives; and oversaw the Trump campaign’s digital media efforts, which are under scrutiny in the Russia probes. Barrack has been interviewed by Mueller’s team; he oversaw the Trump inaugural committee, which is under investigation by Mueller and other federal prosecutors eyeing whether the committee received foreign funds through US straw donors.

The committee’s report suggests that even intense public scrutiny of Russian ties has not given pause to members of Trump’s inner circle pursuing the nuclear deal. “The committee is now launching an investigation to determine whether the actions being pursued by the Trump Administration are in the national security interests of the United States or, rather, serve those who stand to gain financially as a result of this potential change in U.S. foreign policy,” the report says.

Other NSC aides blocked the memo from reaching Trump due to “concern that the directive created significant conflicts of interest since General Flynn’s former business colleagues stood to benefit from the plan and because the plan could generate improper benefit for private parties, including Mr. Barrack, the President’s personal friend.”

Adam Schiff (D-Calif.), whose House intelligence committee is now pursuing a range of questions relating to Trump officials potentially betraying US national security for personal gain, said the oversight committee’s findings “go to the heart of these concerns.”

According to the report, Flynn sought to put Barrack in charge of the plan, asking NSC staffers to have Trump sign a memo directing agency heads to help Barrack pursue the effort. The memo was drafted by McFarlene. Flynn forwarded it on to his staff via email—a highly unusual step that would have allowed McFarlene, Flynn’s recent business partner, to have Trump help the business financially. But the order drew red flags. Other NSC aides blocked the memo from reaching Trump due to “concern that the directive created significant conflicts of interest since General Flynn’s former business colleagues stood to benefit from the plan and because the plan could generate improper benefit for private parties, including Mr. Barrack, the President’s personal friend,” the report says.

After Flynn’s firing as national security adviser, his successor, McMaster, repeatedly told NSC aides to stop working on the plan; still, Harvey and McFarland kept pushing it. Harvey also reportedly told colleagues he was in frequent contact with Flynn after Flynn’s February 14, 2017, resignation.

McFarland said at a meeting on NSC staff on March 15, 2017, that “President Trump told Mr. Barrack that he could lead implementation of the Middle East Marshall Plan,” the report says. She told them that Harvey was meeting with Barrack that day to discuss the plan, adding, “You should all be meeting with Tom.”

On March 21, Harvey held a conference call that included Barrack and Gates. An unnamed career NSC staffer who joined the call later told colleagues that Harvey was promoting the plan “so that Jared Kushner can present it to the President for approval.”

On March 28, 2018, Frances Townsend, a Department of Homeland Security adviser under former President George W. Bush who served on the IP3 board sent a White House adviser an email that included a white paper by Barrack. The paper urged Trump to name “a special representative for the Trump Middle East Marshall Plan with the diplomatic rank of ambassador or special advisor the President” and implement the plan through an executive order.

McFarland told NSC staff on March 15 that Trump had stated that Barrack could not be paid for his role, according to the committee report. But the report raises concern that Barrack hoped to make money on the deal. It cites a recent report that Gates authored a memo for Barrack detailing how Barrack’s firm could “profit off its connections to the incoming administration and foreign dignitaries.”

A spokesman said in a statement to the Associated Press that Barrack will cooperate with the House investigation, adding, “Mr. Barrack’s engagement in investment and business development throughout the Middle East for the purpose of better aligned Middle East and U.S. objectives are well known, as are his more than four decades of respected relationships throughout the region.”