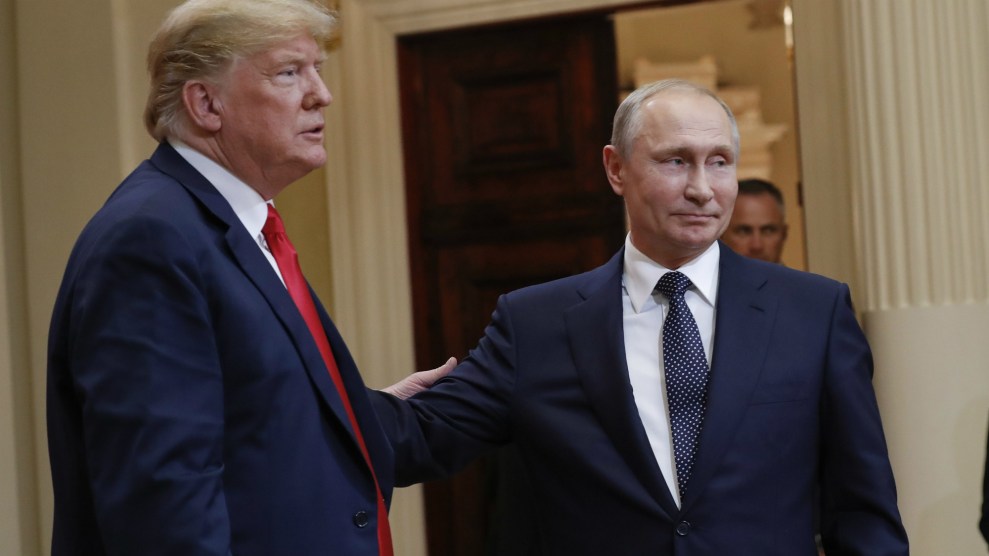 In August, when the Trump administration formally declared Russia responsible for the poisoning of former Russian spy Sergei Skripal and his daughter, it invoked a decades-old law designed to punish countries that use chemical or biological weapons. As required by the law, the administration imposed an initial round of light sanctions—a warning shot, in essence—with a requirement that if within 90 days Russia did not admit responsibility for the attack and provide assurances that it was mending its ways, a far harsher round of sanctions would take effect. That deadline came and went in November with Russia continuing to deny the accusations, and Secretary of State Mike Pompeo announced that the second round of sanctions would be imposed imminently.

But two months later, nothing has happened.

Last March, Skripal, a former Russian intelligence officer who had worked as a double agent for the British government, and his daughter, Yulia, were found unconscious and foaming at the mouth in a public park in Salisbury, England. They had been exposed to a deadly chemical nerve agent called Novichok, which had been developed by the Soviet military. From the outset, the attack seemed eerily similar to the fatal poisoning of Russian dissident Alexander Litvinenko, who was exposed to a deadly dose of Polonium-210 in 2006—an attack for which Russia has also been blamed. The Skripals, along with a police officer who came to their aid and was exposed as a result, were hospitalized for weeks. The British government, along with the United States and several dozen Western nations, blamed Russia for the attacks and expelled Russian diplomats. The Trump administration took an additional step to punish Russia, invoking the Chemical and Biological Weapons Control and Warfare Elimination Act of 1991 (CBW).

“They’ve got to keep up the credibility, or else the Russians think you don’t mean it and then you have a higher risk the Russians will commit an even more serious act of aggression,” says Daniel Fried, who ran the Russia sanctions program under Obama.

The law triggers a series of increasingly draconian sanctions, applied in two steps, if the culprit doesn’t own up to its attack and repent. The law has been invoked only twice before—against Syria in 2013 and North Korea in 2018—and in both cases the punishments it calls for were never implemented. A waiver against imposing the sanctions on Syria was granted for national security reasons, and it was determined that the sanctions against North Korea that the law mandated were largely the same as those already in place. But in Russia’s case, the Trump administration did impose an initial round of sanctions, while making it clear that it would ratchet up the penalties, as called for by the CBW, if Russia didn’t respond.

“Simply by virtue of what the statute sets out, you will be able to see in the US code that if the executive branch cannot certify that Russia has met a series of conditions within three months of the initial round of sanctions, the second round must be imposed,” a senior State Department official told reporters in a background briefing in August. “Those conditions are pretty demanding, but you can see them for yourself in the statute.” The administration had started the clock on the law, the State Department official said, but the decision on whether to impose the second, harsher set of sanctions was entirely determined by Russia’s response. “So really, it’s up to Russia how dramatic the impact is,” the official said.

In September, acting Undersecretary of State Manish Singh testified before Congress that the administration would respond sharply if Russia didn’t take the blame for the Skripal attack.

“We are looking at this November deadline and absolutely we plan to impose a very severe second round of sanctions under the CBW,” Singh said. “The global community will not tolerate behavior such as we have seen from Russia.”

As the first round of sanctions was being implemented, Pompeo said he was attempting to hold talks with Russians over the Skripal matter, but it’s not clear if any substantial discussions ever happened. President Donald Trump himself told reporters he’d consider lifting some sanctions on Russia “if they do something that would be good for us. But I wouldn’t consider it without that.” In October, Russian President Vladimir Putin complained to national security adviser John Bolton about the Skripal sanctions, calling them “unprovoked.” For the second round of sanctions to take effect, the administration had to certify there had been no progress, and at the time of Putin’s complaint, Bolton said the administration was undecided on what would happen. But, two weeks later, on November 6, Pompeo certified that Russia had not met any of the standards to avoid sanctions, triggering the new round of penalties.

The law calls for the Trump administration to impose three of six different sanctions options. According to the State Department, these punitive measures could affect up to 70 percent of the Russian economy. The sanctions could include banning Russian airlines from flying to the United States or refusing to let American banks loan money to Russian companies. But to date, the State Department has yet to implement these tough measures.

Last week, New Jersey Sen. Bob Menendez, the ranking Democrat on the Senate Foreign Relations Committee, sent Pompeo a letter demanding to know why the new round of sanctions had not taken effect. “These sanctions are more than two months overdue,” he wrote. “I urge you to impose these sanctions immediately to ensure that the statutorily mandated sanctions regime is not undermined.”

Daniel Fried, a longtime US diplomat who coordinated the Russia sanctions program in 2014 under former President Barack Obama, says he’s not sure why the latest round of sanctions hasn’t been implemented. But, he notes, by failing to act on the threat that has already been delivered, the Trump administration is sending a dangerous message to Russia.

“For reasons I don’t understand, the administration has not been able to come to closure on this one, and it’s hurting them,” Fried says. “It’s hurting their ability to do other things. They’ve got to keep up the credibility, or else the Russians think you don’t mean it and then you have a higher risk the Russians will commit an even more serious act of aggression.” Given the intense focus on Trump’s relationship with Russia and recent Russian aggressions like seizing the Kerch Strait near Crimea, Fried says the delay is “astonishing.”

“I’m getting kind of frustrated noises from people in the administration that they can’t get it through the system, it’s clogged—they can’t get decisions,” he says. “I find that remarkable given the politics of this.”