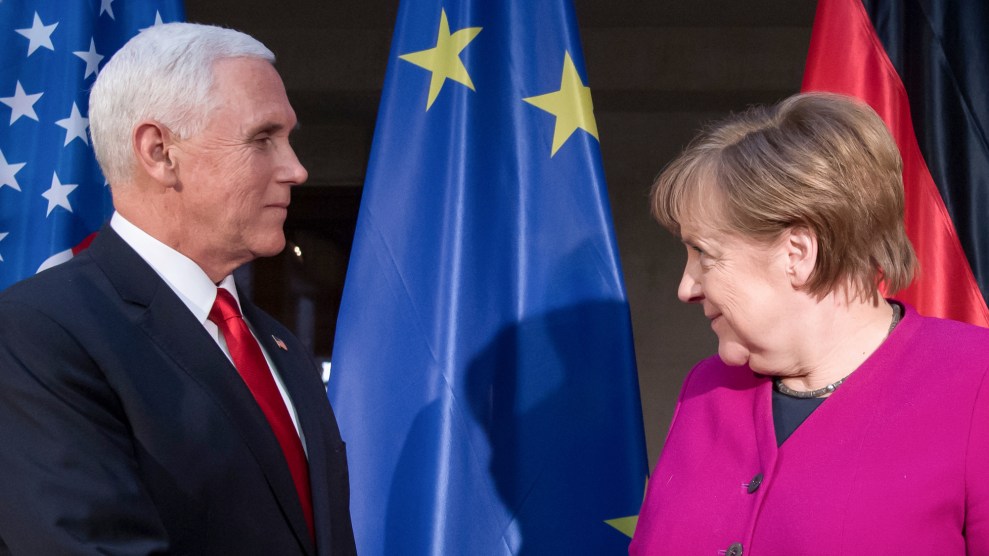 Addressing U.S. allies at the Munich Security Conference, Mike Pence is met with silence as he tells the audience: "I bring greetings from the 45th president of the United States of America, President Donald Trump." pic.twitter.com/yr7SNVhCVf

The conference, which has been held annually since the Cold War, has traditionally been a chance for the United States to show its commitment to Europe. Instead, this year’s meeting highlighted the growing divide between the Trump administration and European allies.

German Chancellor Angela Merkel used her speech on Saturday to say Europe would not follow Pence’s demand for Europe to pull out of the Iran deal, Politico reported.

Merkel also criticized Trump’s isolationist trade policy. “If we’re serious about the transatlantic partnership, it’s not very easy for me as German chancellor to read…that the American department of commerce apparently considers German and European cars to be a threat to the national security of the United States of America,” she said.

Ivanka Trump is the only person in audience who doesn’t applaud after Angela Merkel points out the absurdity of Trump claiming German cars are a national security threat pic.twitter.com/Op11wls73R

Ambassador Wolfgang Ischinger, a German diplomat and the chairman of the conference, wrote in the introduction to the conference report that there is a “certain leadership vacuum in what has become known as the liberal international order.” The body of the report makes clear what he was referring to:

Moreover, the US effort to rally “the noble nations of the world to build a new liberal order” and to oppose authoritarian great powers would be far more credible if President Trump and his administration did not display an irritating enthusiasm for strongmen across the globe, suggesting that this administration is living in a “post-human rights world.” For long-time transatlantic allies, it is still hard to stomach when Trump praises illiberal leaders from Brazil to the Philippines and defies his intelligence agencies in declaring his support for Saudi Arabia after the murder of journalist Jamal Khashoggi, while reserving his harshest criticism for Canada, Germany, or the European Union.

Pence gave a second speech Saturday and though he did not mention the national emergency his boss declared a day earlier, he did have more success in one way: when he offered European leaders greetings from Trump, this time the President at least got a faint applause.