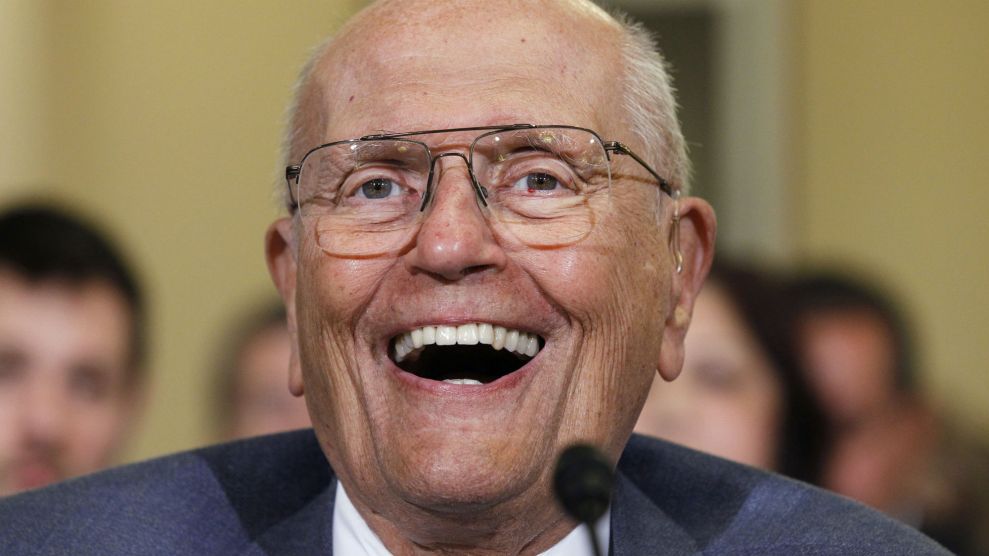 John Dingell, the Democrat who represented Michigan for 59 years and was the longest-serving member of Congress, died Thursday at his home in Dearborn, Michigan. He was 92. Over his long tenure, he shaped environmental policy, supported civil rights legislation, and criticized the growth of partisanship within Congress—and also clashed with Democrats by supporting the Vietnam War and gun rights and failing to support abortion rights.

But after his retirement, he’s also become known as a witty and merciless Twitter antagonist of President Donald Trump.

When I interviewed Dingell in December for a story I was writing on the 45th anniversary of the Endangered Species Act, which Dingell sponsored back in 1973, I couldn’t resist asking him about his savage Twitter feed. So before he hopped off the phone to get to a doctor’s appointment, I asked if he was the person who was actually tweeting from the account, knowing that some people doubted it was true. “I am, yes,” he said, adding, “I have great fun.”

Here are some of his all-time greatest tweets, bringing heat even in his last few days:

The Lovely Deborah is insisting I rest and stay off here, but after long negotiations we've worked out a deal where she'll keep up with Twitter for me as I dictate the messages. I want to thank you all for your incredibly kind words and prayers. You're not done with me just yet.

A lot of great candidates in the mix this election. https://t.co/ccKgfsyk7x

Sit on it, you imbecile. https://t.co/R4jOyjxsqv

Trump’s entire criminal operation is on the brink of collapsing and honestly there is not enough popcorn in the world.

They made Jimmy Carter give up his damn peanut farm and yet this president is all but printing money to hand it directly to his idiot adult children as allowance. Makes me madder than a boiled owl.

Buddy, imagine how the rest of us feel. https://t.co/ZBG7xz5Vhx

I’m going to need one of you young people to explain to me just what in the hell is going on right now.

Glad to see so many House Republicans joining me in retirement. Welcome.

Congratulations. Everyone who watched this entire speech is now the same age as me. Best of luck.

As 1.5 million American citizens were told a ballistic missile was headed their way and to seek shelter immediately, @realDonaldTrump was somewhere on the back nine of his Florida golf course.

He went ahead and finished out 18.

Pretending to work so hard must be truly exhausting. https://t.co/VoP1RnxiF9

Our president can't spell. That concerns me.

43 years ago today. Concise and to the point.

You could even fit it in a tweet, @realDonaldTrump. pic.twitter.com/1rtKdCUwM4

Texas is now bracing for a second natural disaster. https://t.co/kh5jECPDVP

I signed up to fight Nazis 73 years ago and I'll do it again if I have to.

Hatred, bigotry, & fascism should have no place in this country.

Wishing Sean Spicer the best of luck in all future endeavors.

We'll always have those six months of you lying to us every single day.

I'm damn near 100 years old and it appears I have a better memory than our Attorney General. That ain't right. https://t.co/zaq3JgRqOD

Trump still hasn't appointed an FBI Director, the DOJ is in shambles, and he spent the entire weekend golfing.

I'm hearing no major concerns about Trump leaving for his first foreign trip next week, but I am hearing some objections to his return.

Hell, I spent 60 years in Congress without bodyslamming a single reporter.

This guy in Montana won't last long if he manages to win.

Still not sure if I'm doing #TBT correctly, but it feels right. #TBT https://t.co/2qb77AJnVX

Oh no wait that's just how many Americans will lose health care under his terrible plan.

House GOP had the better half of a decade to provide a viable alternative to the ACA. Instead, they scribbled some tax cuts on a bar napkin.

RT if you're more scared of a Donald Trump presidency than you are of ISIS.