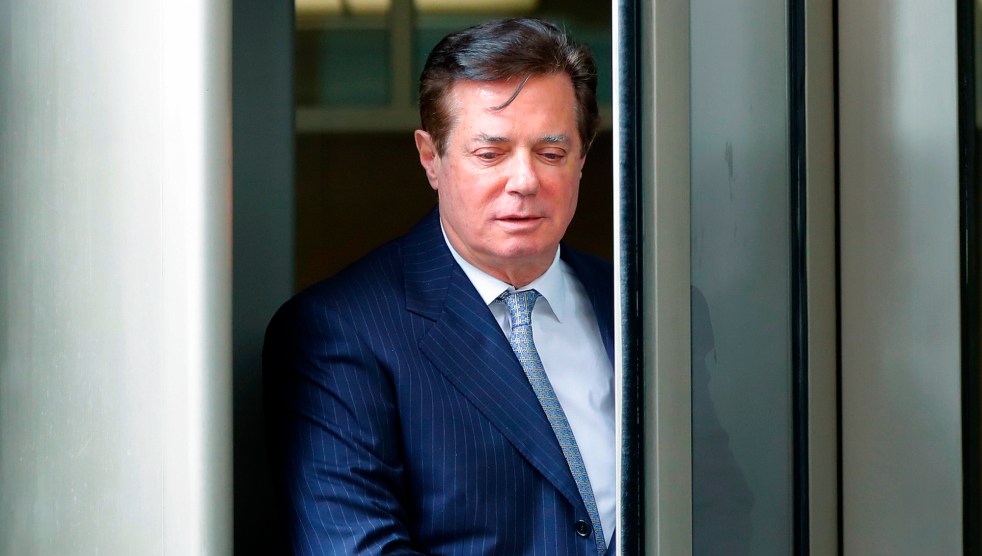 A boatload of revelations produced by special counsel Robert Mueller’s investigation has already yielded strong evidence that Paul Manafort was colluding with pro-Putin forces when he chaired Donald Trump’s campaign. And the release last week of a transcript of a closed-door hearing in the ongoing Manafort case disclosed another suspicious element: Manafort continued to work with a longtime Ukrainian Russian business colleague on a Moscow-friendly initiative even after this man was publicly fingered as a suspected Russian intelligence associate. This bizarre move on Manafort’s part paralleled other curious contacts between the Trump crew and Russians following the 2016 election.

The hearing focused on Mueller’s contention that Manafort, who has been convicted of or pleaded guilty to multiple felony counts including money laundering, tax fraud, and obstruction of justice, violated his cooperation agreement by lying during his interviews with Mueller’s team. And the heavily redacted transcript that became public Friday was full of newsworthy material. It showed that prosecutors believe Manafort had lied in order to “augment” his chances of obtaining a pardon from Trump. It also chronicled prosecutors telling a federal court that a central part of the Mueller investigation has been examining whether during the 2016 election Manafort, or others associated with the Trump camp, privately discussed with Russians or their emissaries a supposed Ukraine peace plan that presumably included the prospect of lifting the harsh economic sanctions imposed on Russia for its intervention in Ukraine. According to the transcript, prosecutors also accused Manafort of lying about another investigation involving the Trump administration. (The transcript was redacted to conceal any details related to this other inquiry.) And prosecutors disclosed information indicating that Manafort engaged in particularly suspicious activity with Konstantin Kilimnik, a onetime Soviet military linguist who for years worked with Manafort, as the American made millions as a political consultant for pro-Putin politicians in Ukraine.

Much of the hearing centered on Manafort’s relationship with Kilimnik. As Mueller’s investigation and media reports have revealed, Manafort was in steady communication with Kilimnik during the 2016 presidential race and apparently used him as an intermediary with Russian oligarch Oleg Deripaska, a longtime business associate of Manafort and a pal of Russian President Vladimir Putin. And the Mueller crew has zeroed in on an August 2, 2016, meeting Manafort held with Kilimnik in New York City, where the two, seemingly at Deripaska’s behest, discussed a so-called peace plan for Ukraine that likely included the lifting of sanctions on Russia—that is, a pro-Kremlin proposal. According to the recently released transcript, Andrew Weissmann, a top prosecutor for Mueller, told the court that Manafort referred to this as a “backdoor” and claimed there was no consideration of this proposal beyond the August 2 conversation. (Part of the court discussion about this meeting was redacted.)

Manafort’s Kilimnik connection has been a key component of Mueller’s investigation, and in December 2017—two months after Mueller initially indicted Manafort—Mueller submitted a court filing that tied Kilimnik to Russian intelligence. The document referred to Kilimnik, without using his name, as “currently based in Russia and assessed to have ties to a Russian intelligence service.”

Here’s where it gets interesting. During the hearing, Weissmann said, “Mr. Kilimnik worked with Mr. Manafort for many, many years [redacted] and is in fact working on [redacted] 2018.” At another point, Judge Amy Berman Jackson noted that the prosecutors had said Manafort was collaborating with Kilimnik on this apparent peace plan in the winter of 2018. So the prosecutors were accusing Manafort of lying when he claimed he shut down this “backdoor” in August 2016. At the hearing, Weissmann also repeated the special counsel’s earlier contention that Kilimnik was “assessed” by the FBI to  “have a relationship with Russian intelligence.”

There is nothing in the public record indicating whether Manafort was aware of any link between Kilimnik and Russian intelligence during the 2016 campaign or in the previous years. But these statements mean that Manafort continued working with Kilimnik on what seemed to be a pro-Russia effort after federal prosecutors publicly alleged that Kilimnik was tied to Russian intelligence—and Manafort did this even after he (Manafort) had been indicted in a scandal involving interactions between Trump associates and Russians.

Manafort’s continued scheming with Kilimnik is another sign that the odd contacts between Trump’s team and Russian interests continued after Election Day. During the transition, Michael Flynn, slated to become Trump’s national security adviser, plotted with the Russian ambassador to undercut President Barack Obama’s imposition of sanctions on Russia for its intervention in the 2016 campaign. Russian oligarchs and pro-Russian Ukrainian officials including Kilimnik attended Trump’s inauguration, with many looking for an end to US sanctions on Russia. And once in office, Trump shared sensitive intelligence with Russia’s foreign minister and ambassador, fawningly endorsed Putin’s denial of Russian interference in the 2016 election at a joint press conference in Helsinki, and barred his staff from knowing details of his private conversations with Putin.

At the hearing, prosecutors noted that Kilimnik was angling after the election to make Manafort a “spokesperson” in the United States for a supposed peace plan. According to the New York Times, this proposal called for dividing Ukraine and placing Ukraine’s former pro-Russian president Viktor Yanukovych, who fled the country for Russia in 2014, in charge of a semiautonomous region in eastern Ukraine. (In the years before Yanukovych’s corrupt regime fell, Manafort made millions in Ukraine as a consultant for Yanukovych and his party.) In this position, Manafort “would also have access to senior people [redacted]” Weissmann said. “That’s as far as I can go on this record.”

How wedded was Manafort to this alleged Russian intelligence associate that he felt compelled to collude with him while he was under indictment and under the watchful gaze of federal prosecutors? And collusion it appears to have been, for Manafort and Kilimnik were both indicted for witness tampering in June 2018. (The implication of the hearing is that in the first half of 2018, the indicted Manafort was working with Kilimnik both to push a pro-Russia proposal and to impede Mueller’s investigation.)

This one subplot of the sprawling Trump-Russia scandal ought to be a full-blown scandal all its own: Trump’s campaign manager conspired with a suspected Russian intelligence associate—and did so while Moscow was running a covert operation to subvert the US election in order to help Trump, and kept on doing so long after the election was done and his colleague was publicly outed.

During the hearing, Weismann told the court that Manafort’s interactions with Kilimnik—which included passing him polling information from inside the Trump campaign—goes to “the heart of what the special counsel’s office is investigating.” But no publicly available passage in the redacted transcript spells out precisely what Weissmann meant. The revelation that Manafort kept conniving with Kilimnik to advance a Russian interest deepens this mystery and raises an obvious and important question: Why couldn’t Trump’s campaign chair quit an associate suspected of Russian intelligence ties?