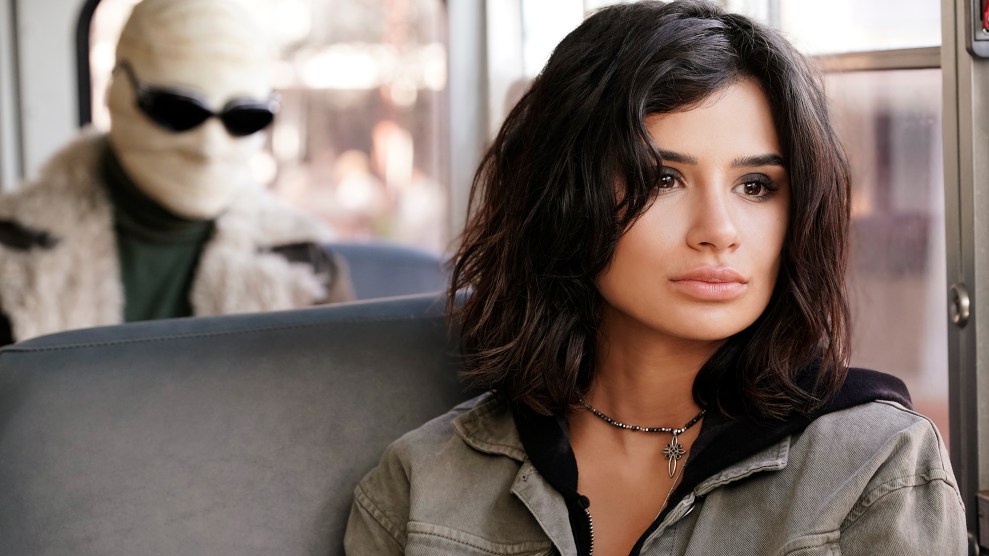 You may know Diane Guerrero as the actor who plays Maritza, the bubbly and sassy inmate in Orange Is the New Black, or the ditzy waitress Lina from Jane the Virgin. You may also know her as the author of In the Country We Love: My Family Divided, a memoir about her own story of family separation, or as an activist who has become an outspoken voice on issues of mental health, immigration reform, and acceptance.

That’s why the 32-year-old has embraced her new TV role in the new DC Comics show Doom Patrol, which premiered Friday. The action-packed series tells the story of an idealistic mad scientist and his team of superpowered misfits, including Guerrero’s character, Crazy Jane, who confronts mental health issues stemming from trauma.

Guerrero recently spoke to me on the phone from Atlanta, and although we started out talking about Doom Patrol, our conversation took a more serious turn, ranging from mental health to anti-immigrant and anti-Latino sentiments in the Trump era.

Mother Jones: Tell me about Crazy Jane, the character you play in Doom Patrol.

MJ: Was there one of the 64 personalities that you felt that was a little more like you?

DG: I would say a lot of them remind me of me. I can be very moody. I have to say I do relate to her because she’s trying to balance all of her emotions at the same time, constantly. I feel like often times I just feel like Hammerhead, which is kind of like her angry side, the side that wants to just break everything and tell everyone to go fuck off. But in general I think I’m more like Jane trying to control all of those emotions.

MJ: I think a lot of people are going to be able to relate to that, especially those of us who feel like we feel too much sometimes.

DG: Totally! I mean, all of the characters on Doom Patrol explore traumatic pasts, how to deal with how those pasts and how that affects their present and their future. When you watch Doom Patrol, you’ll see most of the characters are trying to run away from their feelings and their emotions, and the minute they take a second and look at themselves face to face, that’s when things can actually get resolved and get one step closer to peace. I think a lot of people will be able to relate to that, especially in a country that doesn’t really respect the importance of mental health and how in order for us to really succeed I think as a human race we have to address our mental health.

“I think that many people in the Latino community are excited to see a Latino superhero, despite the fact that she’s troubled and maybe not like a cookie cutter superhero that you normally get.”

MJ: Do you think that there’s something that you bring to this character in particular, being first generation, being Latina?

DG: First of all, I don’t know many Latino superheroes. I mean it’s not addressed in this comic where my character is from, but I don’t think we can hide the fact that I do have brown skin, you know, and that my background is what it is. I think that many people in the Latino community are excited to see a Latino superhero, despite the fact that she’s troubled and maybe not like a cookie cutter superhero that you normally get. Also, I guess I do bring the fact that I had lots of trauma myself as a child, and as an adult I deal with mental health issues. I know what it is like to have to overcome traumas so I think that has brought me a little closer to this character because.

MJ: Your parents were taken away, unexpectedly deported back to Colombia when you were 14. How did that shape how you see the world, and how you see yourself as a young person born and raised in this country who had this happen?

DG: I think it’s really challenged me to think about the world differently, and it’s taught me that life isn’t perfect—and not to expect perfect. It’s helped me a lot in entering a difficult and competitive business. It has helped me participate in matters of social justice in the way that I have. And it certainly helped me appreciate family and what that means to me.
You know there were moments in my life where I said, “Okay, my life is over, my family is gone, and I’ll never have the type of relationship that I envision with them.” But I learned to not give up. You know, you wake up the next day and you do something for yourself and realize that you just have to sort of think outside the box and see how you are going to be part of your own solution.

“I’ve learned to love myself and say, ‘Damn, girl, you’ve overcome a lot…you certainly could put yourself in the list of badass warriors out there.’”

And obviously I won’t pretend to know what that solution is, but I think that I’m a much happier person knowing that I choose love over fear and hate. I know that family separation is wrong, I know that thinking about others is important, and I want to make sure that those feelings are included in my work as an actor and as an author. The easy choice is to be upset and be angry, to wallow in self-pity. And I’ve done all of those. But I’ve learned to love myself and say, “Damn, girl, you’ve overcome a lot. I mean there are people out there who’ve overcome much more, but you certainly could put yourself in the list of badass warriors out there.”

MJ: Do you think that in the last couple of years it has been a little harder to keep an optimistic attitude considering the political climate against immigrants and Latinos?

DG: No, actually. As a Latina, as a first generation, as an American, as as a woman who has experienced all this shit all of her life, this is not surprising. It’s only encouraging because now I see that it’s out in the world. People were denying this behavior from others and denying this sort of mentality and way of thinking in this country. It’s not, “I told you so,” but it certainly makes you feel less crazy because you’re just like, “This is exactly what I was talking about.” When people told you to shut up, to stop pulling the race card, to stop being upset about your history, it’s like, “No, no, no—it’s real. All these evil things exist.” We cannot move past it because we have not dealt with it, and so I feel like it’s it’s a moment for growth, it’s a moment for us to wake up. I see families being put in cages, which is a terrible thing, I just see hate spewed in the streets, and that’s terrible. But I think that if this doesn’t serve us as a point to turn things around and to try to have better conversations and move things forward in a positive way, I don’t know what can.

“When people told you to shut up, to stop pulling the race card, to stop being upset about your history, it’s like, ‘No, no, no—it’s real. All these evil things exist.'”

MJ: Bringing it back to Doom Patrol, was there a storyline or a scene that resonated with you the most?

DG: I know I keep going back to the human condition and mental health, but there’s this one scene where it’s literally like counseling or like a group session where all these unlikely superheroes with tremendous power who don’t know how to hone their power. They’re talking about things that have affected them as children, and I think that resonated with me. After doing that scene I felt better myself, like just me, Diane, and maybe also because this was sort of reflective of the world that I want to live in, one where we’re sharing what we really feel and respecting what others are saying and what others are feeling, so that we could understand each other better. That really resonated with me.