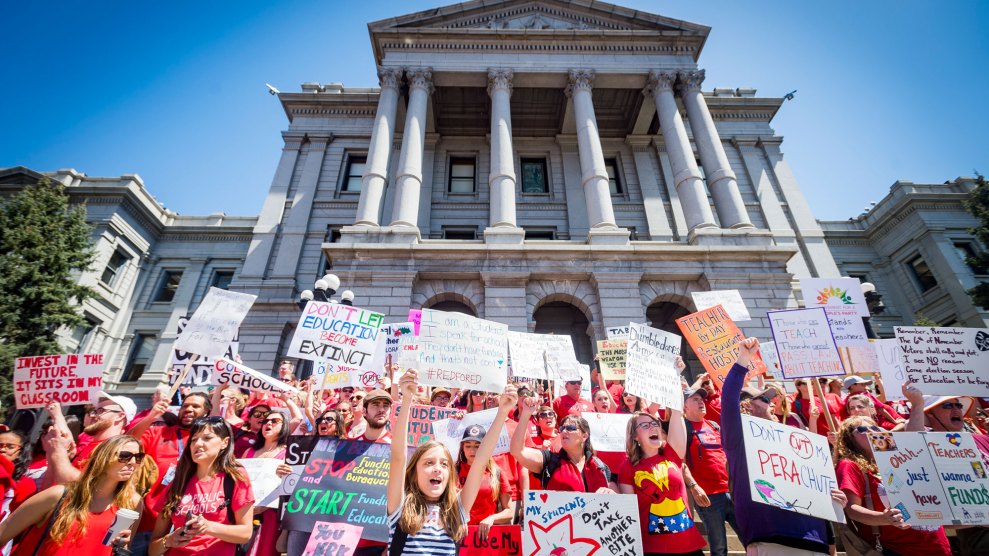 Thousands of teachers and supporters end their rally in front of the Capitol after marching in Denver, Colorado, in April 2018.Dougal Brownlie/The Gazette/AP

More than 2,000 Denver teachers went on strike Monday for the first time in 25 years following months of negotiations with the school district—including a last-ditch effort over the weekend—over wages. The walkout, which will affect more than 71,000 students in Denver, comes on the heels of last month’s Los Angeles teacher strike, which lasted six days and yielded a 6 percent pay raise, reductions in class sizes, and more support staffers in schools throughout the city. It also sets the stage for another fight looming in Oakland, where teachers have voted to authorize a strike that could start at the end of the month.

The city’s teachers’ union wants the district to change its pay-for-performance system for how they compensate teachers, in part by reducing or eliminating incentives for teachers who work in high-poverty schools in favor of raises to teachers’ base salaries. Teachers in Denver make an average of $50,449 a year, Colorado Public Radio reported, roughly $8,000 below the national average.

Rob Gould, lead negotiator for DCTA, said there will be no bargaining on Monday but that both will be back at the table on Tuesday.

In a letter to the state’s labor agency last month, Denver Public Schools officials asked that Democratic Gov. Jared Polis step in and mediate, a move that would have staved off a walkout for 180 days. On January 28, the teachers’ union responded that the state shouldn’t intervene, noting in its petition that state officials, including Polis, couldn’t “mend a broken relationship that currently exists between the parties.”

Last week, Polis, who has made education a top priority, announced that the state would not get involved. He remained optimistic that a deal could be reached in time but warned that the strike would disrupt students’ lives and also hamper an effort to pursue a statewide ballot initiative to raise money for schools and road repairs. “The voters of this state do not reward dysfunction and disagreement,” he told reporters. Polis met separately with the teachers’ union and district officials to urge a resolution. In November, voters shot down an effort that would have raised taxes on Colorado’s wealthiest households and corporations to bring in $1.6 billion in tax revenue for schools and full-day kindergarten.

The threat of a work stoppage has prompted district officials to hire substitutes and enlist central office administrators to fill in for striking teachers. Denver Superintendent Susana Cordova has stated that schools would be kept open during a walkout—similar to what happened in Los Angeles—but that they would cancel early childhood courses. Denver’s school district could lose up to $400,000 a day if teachers declined to go to work.

“No teacher wants to strike. We would rather be teaching students in our classrooms,” Henry Roman, the president of the teachers’ union, said in a statement. “But when the strike starts, we will be walking for our students. The district’s revolving door of teacher turnover must stop. DPS must improve teacher pay to keep quality, experienced teachers in Denver classrooms.”

The threat of work stoppage isn’t unfamiliar to teachers—or families—in Colorado. In April, after the #RedforEd protests swept through West Virginia, Oklahoma, and Arizona, hundreds of teachers protested in Denver to make a similar call for better pay. Days later, thousands of the state’s teachers, who were among the lowest-paid educators in the country, staged protests at the Colorado Legislature to call on lawmakers to raise teachers’ salaries and provide more funding for the state’s schools.

The action caused Republican lawmakers to introduce legislation that would punish teachers who went on strike, prompting criticism from state Democrats who viewed the move as “anti-worker.” The effort failed. In May, after a five-day strike, teachers in Pueblo, nearly two hours south of Denver, won a 2 percent pay increase.