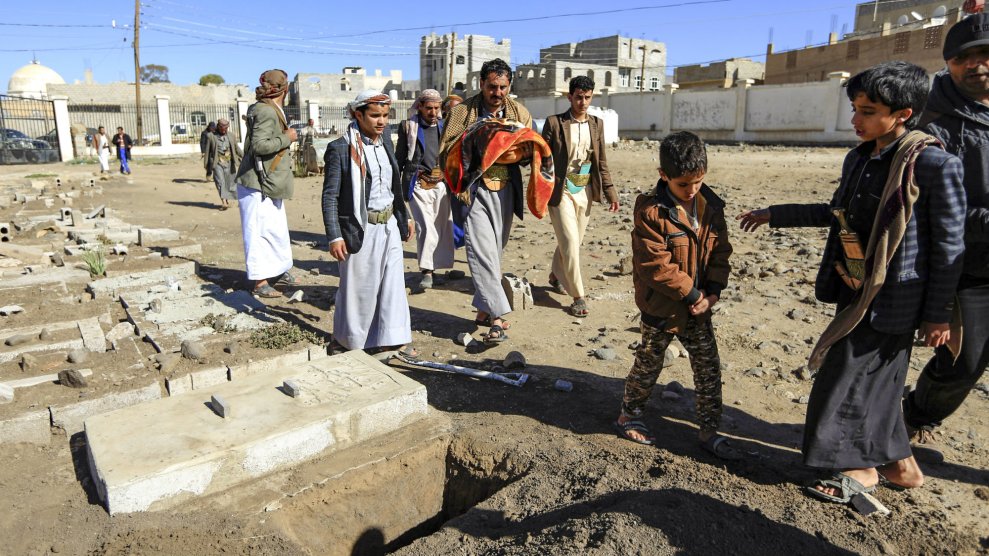 The grandfather of a pair of conjoined twins, whose medical condition drew international attention to the plight of civilians in the Yemeni capital of Sanaa, carries their dead body during a burial service on February 10.Mohammed Huwais/AFP/Getty Images

The House voted Wednesday 248-177 to end support for Saudi Arabia’s war in Yemen, setting up a duel with President Donald Trump over his administration’s complicity in the world’s worst humanitarian catastrophe. The war-weary Senate will now consider the resolution just two months after passing a nearly identical bill.

Rep. Ro Khanna (D-Calif.), the resolution’s primary sponsor, called it a “historic” moment in an interview with Mother Jones. “This signals a paradigmatic shift in American foreign policy,” he said. “It’s a fundamental weakening of executive power on matters of war and peace.”

Democrats had been expected to act quickly on Yemen after taking control of the House in January. Since rebels toppled Yemen’s internationally recognized leadership four years ago and plunged the poorest country in the Middle East into a civil war, Saudi Arabia, with the support of American bombs and intelligence, has led a coalition of neighboring states against the rebels to disastrous effect. Khanna’s bill would bar US forces from supporting the Saudis with mid-air refueling and block American involvement in combat outside of strikes against terrorist groups like Al Qaeda’s affiliate in Yemen.

An estimated 85,000 young children in Yemen have died from starvation and disease. At least 10,000 civilians have been killed—some estimates put the figure roughly six times higher—in attacks that have drawn attention to the role American involvement has played in exacerbating the conflict. In August, a Saudi warplane bombed a bus carrying 40 schoolchildren, killing all of them. The bomb was later discovered to have been manufactured by Maryland-based Lockheed Martin and sold to the Saudis.

In December, the Senate moved to block aid to Saudi Arabia amid growing outrage from Republicans over the kingdom’s role in journalist Jamal Khashoggi’s murder, but then-House Speaker Paul Ryan blocked the chamber from voting on whether to end support for the war. The CIA concluded that Khashoggi’s murder was ordered by Saudi Crown Prince Mohammed bin Salman, according to the Washington Post, leading prominent Republicans like Sen. Lindsey Graham (R-S.C.) to say the White House would be “willfully blind” not to hold the Saudi leader accountable. The administration’s failure to meet a deadline last week to deliver a report to Congress on Khashoggi’s slaying has only fueled lawmakers’ ire. Suspicion of the US-Saudi alliance, which presidents from both parties have upheld for generations, has shown no signs of abating. Trump has not helped matters by repeatedly defending the Saudis and linking his support for them to their lavish spending on American weapons. “It was so blatant what the administration did,” Khanna said.

During this new period of divided government, with Democrats in control of the House while Republicans retain a majority in the Senate, war powers have become one of the rare points of agreement between progressive Democrats and the far-right Freedom Caucus. Three Republicans, including two members of the Freedom Caucus, co-sponsored the bill, and even prominent Trump ally Mark Meadows (R-N.C.) has been unreserved in his praise for Khanna’s effort. “He has a strong opinion and that opinion is shared by some on both sides of the aisle,” Meadows told Politico. “He’s picked up on an area that is ripe for debate.” Yemen has become a flashpoint for Democrats despite former President Barack Obama’s decision to initiate American support for the Saudi coalition. More than two dozen ex-Obama officials, including former national security adviser Susan Rice, have since called on Trump to end US involvement in Yemen.

That debate will almost certainly extend to the floor of the Senate, where, by rule, members can bring legislation to a vote even against the wishes of Majority Leader Mitch McConnell (R-Ky.). Khanna will need more allies to overcome the threat of Trump’s veto given that only 56 senators supported the December bill to end US support to Saudi Arabia. Two-thirds of lawmakers in each chamber of Congress are needed to override a veto. The administration has argued that Khanna’s resolution is inappropriate because it invokes the 1973 War Powers Act, which restricts the president’s ability to deploy troops into conflict without congressional approval, for a war that does not include any US ground combat troops. In the four-plus decades since Congress adopted that landmark resolution, lawmakers have only rarely challenged the president’s war-making authority, and never in a resolution that has cleared both chambers. The United States has not formally declared a war since 1942.

An unlikely coalition of senators, including libertarian-leaning Mike Lee (R-Utah) and firebrand progressive Bernie Sanders (I-Vt.), will now have the chance to get a landmark war powers bill to Trump’s desk. “The Founders specifically gave Congress—the branch closest to the people—the power to declare war,” Lee said in a statement to Mother Jones. “Yet we’ve been participating in the Yemeni Civil War since 2015 without any approval from Congress. It was unconstitutional then, and it’s unconstitutional now.”