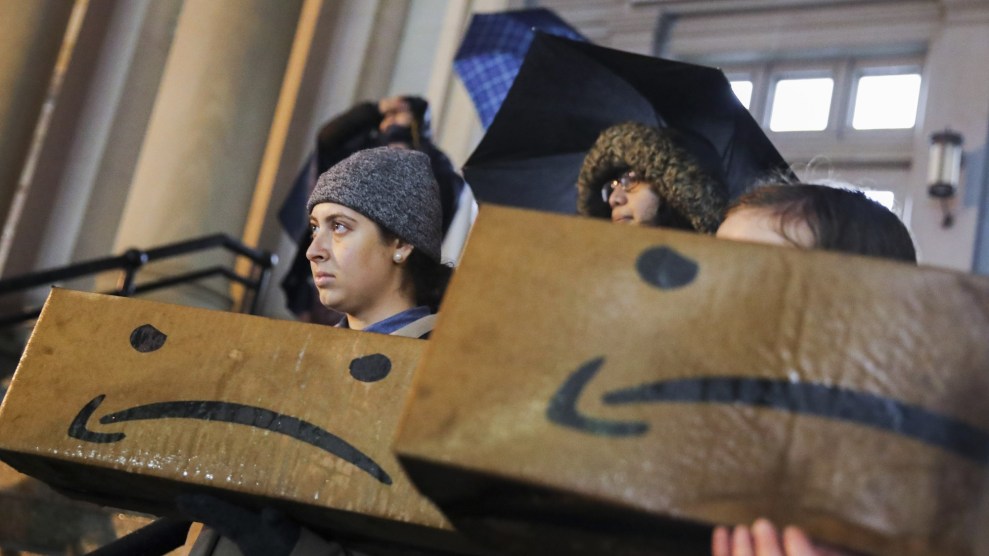 When Amazon announced in November that it would be opening an East Coast headquarters in New York City, employees began snatching up million-dollar condos in Queens’ Long Island City neighborhood, where construction of the headquarters was planned. But those employees might be left with buyer’s remorse this Valentine’s Day. After mounting pressure from progressive groups, labor organizers, and some city politicians, the company is bowing out of a deal that would have granted it more than $3 billion in government subsidies in exchange for bringing the city more than 25,000 jobs.

One of the key factors behind the reversal was mounting political pressure from labor and progressive activists who raised red flags about the billion-dollar company’s anti-labor activity and work with Immigration and Customs Enforcement, while highlighting ongoing gentrification in Queens that the company’s presence would accelerate. Labor activists hoped to leverage the city’s offer of subsidies to make the company commit to union jobs. Shortly after the announcement, workers at Amazon’s Staten Island warehouse launched an organizing effort with the Retail, Wholesale and Department Store Union (RWDSU).

“There’s never been greater leverage—if taxpayers are giving Amazon $3 billion, then taxpayers have the right to demand that Amazon stop being a union-busting company,” Stuart Appelbaum, the president of RWDSU, told Bloomberg in December. “It’s incumbent upon the governor and the mayor to make sure that nothing happens to these workers who are standing up for their rights. If Amazon continues its union-busting activities in New York, they should call off the deal.” In late January, both RWDSU and the Teamsters Union sent a letter to NYC Mayor Bill de Blasio expressing their opposition to Amazon, calling its workplace conditions “deadly and dehumanizing.” Two days later at a City Council meeting, Brian Huseman, Amazon’s vice president of public policy, said the company would not remain neutral if Amazon workers in New York chose to unionize.

Ultimately, rather than fight mounting political pressure over the deal’s cost or seek an accommodation with unions and allied politicians, Amazon chose to call off its Queens expansion shortly after meeting with union leaders and New York Gov. Andrew Cuomo. While Appelbaum told the New York Times he felt the meeting was productive, the next day Amazon announced its decision.

“After much thought and deliberation, we’ve decided not to move forward with our plans to build a headquarters for Amazon in Long Island City, Queens. For Amazon, the commitment to build a new headquarters requires positive, collaborative relationships with state and local elected officials who will be supportive over the long-term,” the company explained in a statement on its website. “A number of state and local politicians have made it clear that they oppose our presence and will not work with us to build the type of relationships that are required to go forward with the project we and many others envisioned in Long Island City.”

“Like a petulant child, Amazon insists on getting its way or takes its ball and leaves,” state Sen. Mike Gianaris, a Long Island City Democrat who opposed the deal, told the New York Times on Thursday. “The only thing that happened here is that a community that was going to be profoundly affected by their presence started asking questions.’

Rep. Alexandria Ocasio-Cortez (D-N.Y.), a vocal opponent of the deal, which would have affected constituents in her adjacent district, praised the news as a victory for New Yorkers against “corporate greed.”

Anything is possible: today was the day a group of dedicated, everyday New Yorkers & their neighbors defeated Amazon’s corporate greed, its worker exploitation, and the power of the richest man in the world. https://t.co/nyvm5vtH9k

The company’s decision comes as a disappointment to those who had hoped to use the plan to push for better working conditions at Amazon.

“Throughout this process, Amazon’s behavior has been despicable. All New Yorkers were asking was for this company to respect our values. And they turned tail and said, ‘No,'” said Dave Mertz, a New York RWDSU official, at a press conference after the announcement.