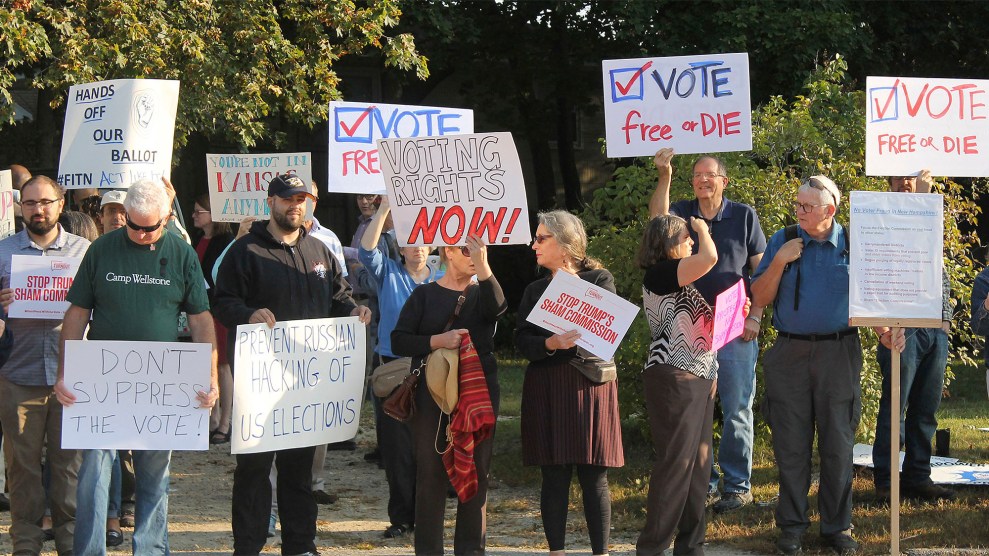 With the House of Representatives set to debate its first legislation of the new session on Tuesday, Republicans are calling in two “expert witnesses” to fight the measure who are best known for discredited claims about voter fraud that have been repeatedly debunked in federal court.

The House Judiciary Committee is holding its first hearing Tuesday on a sweeping democracy reform bill introduced by Democrats that would make it far easier to vote and harder to buy elections. HR 1: The For the People Act includes reforms like automatic and Election Day registration, nationwide early voting, independent redistricting commissions, and public financing of congressional campaigns. Harvard Law School professor Lawrence Lessig called it “the most important civil rights bill in half a century.”

While voting rights lawyers are testifying in favor of the bill, Republicans on the judiciary committee who oppose the legislation have recruited two of the biggest vote suppressors in their party to testify against it: Hans von Spakovsky of the Heritage Foundation and J. Christian Adams of the Public Interest Legal Foundation.

Von Spakovsky and Adams were key members of President Donald Trump’s controversial election integrity commission, which shut down after failing to find evidence of widespread voter fraud. For more than a decade, they have led an aggressive push to make it harder to vote and have spread false claims about fraud. Their credibility has also been called into question recently by federal courts.

Von Spakovsky and Adams first worked together to roll back voting rights enforcement in the Justice Department’s Civil Rights Division under George W. Bush. Von Spakosvky was special counsel to Bradley Schlozman, the assistant attorney general for civil rights, who said he wanted to “gerrymander all of those crazy libs” out of the division’s voting section. (Schlozman was later embroiled in scandal for the politically motivated firings of US attorneys.) Six former lawyers in the voting section called von Spakovsky the “point person for undermining the Civil Rights Division’s mandate to protect voting rights.”

Adams, as a lawyer in the voting section, sought to prosecute African Americans in reverse-discrimination cases and resigned from the Justice Department when the Obama administration refused to prosecute the New Black Panther Party case, citing “a hostility in the voting section and in the Civil Rights Division to bringing cases on behalf of white victims for the benefit of national racial minorities.”

For more than a decade, von Spakovsky and Adams have led an aggressive push to make it harder to vote and have spread false claims about fraud.

As members of Trump’s election commission, von Spakovsky and Adams helped then-Kansas Secretary of State Kris Kobach, the commission’s vice chair, formulate a controversial letter requesting sensitive voter data from all 50 states, which backfired spectacularly when many states refused the request. Before joining the commission, von Spakovsky called on the Trump administration to exclude Democrats and “mainstream Republican officials and/or academics” from joining it.

Von Spakovsky was among the first figures in the Republican Party to lobby for strict voter ID laws, and was retained by Kobach to defend Kansas’ proof-of-citizenship law for voter registration, which blocked 1 in 7 new voters in Kansas from registering from 2013 to 2016. District Judge Julie Robinson, a Bush appointee, struck down the law last year and sharply criticized von Spakovsky’s testimony at the trial.

“The Court gives little weight to Mr. von Spakovsky’s opinion and report because they are premised on several misleading and unsupported examples of noncitizen voter registration, mostly outside the State of Kansas,” Robinson wrote. “His myriad misleading statements, coupled with his publicly stated preordained opinions about this subject matter, convinces the Court that Mr. von Spakovsky testified as an advocate and not as an objective expert witness.”

Adams, for his part, has made wildly unsubstantiated charges about the prevalence of mass voter fraud, falsely claiming in a series of reports that there was an “alien invasion” of thousands of noncitizen voters in Virginia.

One of the “astonishing” examples of fraud claimed by the Public Interest Legal Foundation, a right-wing legal group helmed by Adams, was that Maureen Erickson, who listed an address in Guatemala, had “voted in 14 different elections—most recently in 2008—before her registration was canceled.” But as my colleague Pema Levy reported, Erickson was a US citizen living in Guatemala as a missionary who legally voted by absentee ballot in Virginia.

Four Virginia voters falsely accused of voting as noncitizens have sued Adams for voter intimidation, claiming he violated the Ku Klux Klan Act of 1871, among other civil rights laws.

Adams has filed numerous lawsuits to force states and counties—including some with large minority populations—to aggressively purge their voter rolls. One such lawsuit filed against Florida’s Broward County, a heavily Democratic area, was dismissed by a federal judge last year, who called the expert testimony by Adams’ group “misleading” and “inaccurate.”

Adams has dubbed HR 1 “Nancy Pelosi’s plan to terminate state control over American elections.” Election law experts have widely praised the bill. Rick Hasen of the University of California-Irvine School of Law said it would “go an enormous way toward repairing our badly broken democracy.”

But Republicans—as evidenced by the testimony of von Spakovsky and Adams—have launched a counteroffensive against what they view as a threat to the GOP’s power. “Their proposal is simply a naked attempt to change the rules of American politics to benefit one party,” Senate Majority Leader Mitch McConnell wrote in the Washington Post on January 17. “It should be called the Democrat Politician Protection Act.”