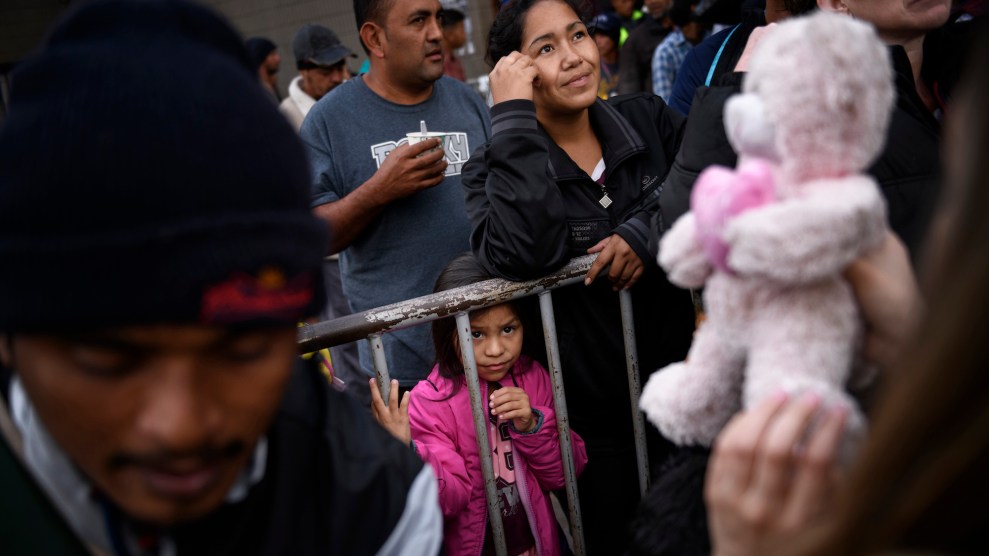 A girl from Honduras waits for a present given by a nongovernmental organization in December at a shelter in Tijuana, Mexico.Daniel Ochoa de Olza/AP

If the Senate Republican proposal to reopen the government is any indication, the shutdown has no end in sight. At the heart of the bill is an extreme plan to gut protections for Central American children seeking asylum in the United States—one Democrats are certain to reject.

On Saturday, President Donald Trump pitched a deal to end the shutdown that he forced after failing to get funding for his border wall. He framed it as a compromise, but the plan offered little additional protection for immigrants in exchange for the $5.7 billion Trump wants for the wall, and Democrats quickly rejected it. On Monday night, Senate Republicans all but assured the plan’s defeat by releasing a bill to end the shutdown that is far more extreme that what Trump proposed this weekend.

Republicans’ decision to propose crackdowns on migrant children shows they still have little interest in ending the shutdown. The heart of the bill reads like a wish list drawn up by hardline anti-immigrant activists like White House senior adviser Stephen Miller. Kerri Talbot, the federal advocacy director at the Immigration Hub and a former Democratic Senate immigration aide, said the bill’s asylum provisions were the most extreme she could recall seeing in legislation. “This is a Stephen Miller special and it is a Trojan horse,” Talbot told reporters on Tuesday.

The final 75 pages of the 1,301-page bill are misleadingly labeled the “Vulnerable Immigrants Protection and Security Act.” This section of the bill would make it impossible for many Central American children to apply for asylum in the United States at a time when record numbers of Central American families are seeking protection.

Specifically, the bill would force children from El Salvador, Guatemala, and Honduras to apply for asylum from abroad for the next three years. Currently, children can come to the United States, make their asylum claim, and remain in the country while the claim is awaiting adjudication. Under the Senate bill, they would have to apply from abroad, under potentially dangerous conditions. They would also have to meet new requirements to receive asylum. They would be eligible for protection only if they have a parent or guardian in the United States who can take care of them, and the Department of Homeland Security would have to decide that granting them asylum would be “consistent with the national interest.”

The bill would also cap the number of children from those countries who can be granted asylum each year, make them pay an unspecified application fee designed to weed out “frivolous” claims, and block them from appealing in court. Finally, children could apply for asylum only if the United Nations High Commissioner for Refugees or a nongovernmental organization told DHS they were likely to be eligible for protection. There is no such requirement today.

If Central American children come to the United States despite those crackdowns, the bill would make it easier to summarily deport them.

There is one small concession to immigrants in the bill: It would allow some undocumented immigrants who came to the country as children, known as Dreamers, to apply for a three-year reprieve from deportation. (Currently, some Dreamers are temporarily protected from deportation, but the Supreme Court could revoke those protections.) The bill would give a similar reprieve to undocumented immigrants granted temporary protected status after disasters hit their home countries.

Both groups are only at risk of deportation because Trump has tried to revoke their status. Republicans are offering a reprieve that most DACA recipients and TPS holders have already been granted by the courts, which have so far blocked Trump’s efforts to deport them. The Republican bill would also undermine TPS by making it apply only to immigrants with legal status; TPS currently protects people in the United States regardless of their immigration status. The switch would let DHS deport undocumented immigrants to countries facing ongoing natural and manmade disasters.

Most of the Republican bill focuses on restoring funding to the Cabinet departments whose employees have been working without pay for the past month. The spending section of the bill would provide Customs and Border Protection with funding to hire about 750 new Border Patrol agents. Immigration and Customs Enforcement would be given the resources to detain at least 52,000 immigrants per day—a record—up from the 40,520 detention beds currently funded by Congress.

But these details are likely moot. After Democrats rejected the president’s framework, there’s virtually no chance they’ll be willing to back the far more punitive measures proposed by Republicans in the Senate.

Talbot, who helped write the comprehensive immigration bill that passed the Senate in 2013, said it’s clear that Republicans had not consulted Democrats on the measure. “These types of extreme proposals would never end up in a bipartisan bill,” she said.