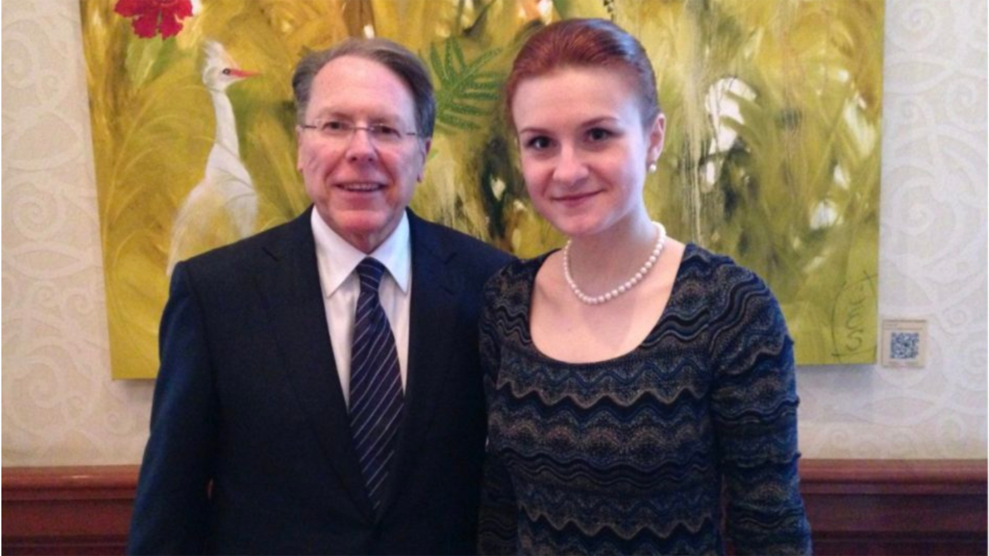 Two Senate committees investigating Russian efforts to influence US politics through the National Rifle Association are led by GOP senators who have long received campaign support and donations from the gun group and its leaders. While that might raise questions about the integrity of the investigations, Democrats close to the probes tell the Trace and Mother Jones that they are proceeding without impediment—indicating that the NRA’s influence in Congress may not help it avoid scrutiny amid the wider Trump-Russia investigation.

Both the Senate Finance Committee, led by Sen. Charles Grassley of Iowa, and the Senate Select Committee on Intelligence, led by Sen. Richard Burr of North Carolina, have been looking into the relationship between the NRA and confessed Russian agent Maria Butina. Butina spent years courting the gun group’s leadership in what prosecutors have described as an effort “to penetrate the U.S. national decision-making apparatus to advance the agenda of the Russian Federation.”

According to a recent NBC News report, investigators for Burr’s committee questioned former Trump aide Sam Nunberg about the Trump campaign’s relationship with the NRA. Nunberg confirmed in an interview that Senate intelligence committee staff asked him on January 11 about Butina’s efforts to coordinate a one-on-one photo with Trump at a libertarian political conference in July 2015—the same conference where Butina famously asked Trump a question about lifting sanctions on Russia—and about Trump’s attendance at the NRA annual convention in Nashville that same year.

Nunberg said he told investigators that Butina’s boyfriend Paul Erickson, a NRA and GOP operative, had “asked if I could coordinate a picture with Trump at the July 2015 event. I told Paul that I couldn’t. On NRA, they asked how Trump attended the [group’s 2015 convention in Nashville]. We simply accepted an invite.”

The NRA is so enmeshed in GOP politics that, in theory, any investigation led by a Republican legislator could be vulnerable to allegations of conflict of interest. But Burr is particularly tight with the NRA, which has spent more than $7 million in support of his campaigns over the years, putting him among the top recipients in Congress of NRA largesse, according to the Charlotte Observer.

In 2016, as the Trace and Mother Jones have reported, the NRA’s support for Burr’s reelection campaign appears to have been coordinated in violation of campaign finance laws. Federal Election Commission records show that both the NRA’s ads supporting Burr and the Burr campaign’s own ads were handled by the same media consultant, which election law experts said was “obvious” evidence of an outside group illegally sharing information with the candidate they support.

Burr’s office and the NRA did not respond to requests for comment. But a Democratic staffer on the committee told us that so far, Burr has been “a strong partner” in investigating Russian attempts to influence US policy, including through the NRA. “He hasn’t stood in the way,” the staffer said.

“There seems to be a bipartisan agreement that foreign money should not be entering our elections.”

Robert Maguire, the research director for Citizens for Responsibility and Ethics in Washington, said the mere fact that Burr is permitting an investigation into his political patron is evidence that “the ground has shifted” under the NRA’s feet. “I feel like this is not as cut and dried as it used to be,” Maguire said. “If you had asked me two years ago whether any Republican could hold the NRA accountable, I’d have been skeptical. But now I’m not so sure. There seems to be a bipartisan agreement that foreign money should not be entering our elections.”

Senate rules do not explicitly bar senators from overseeing or participating in investigations into donors, and experts we consulted with said Burr is under no obligation to recuse himself.

Under Grassley’s chairmanship, Sen. Ron Wyden of Oregon is leading the investigation on the finance committee, where he serves as the ranking Democrat. In July, he sent letters to several prominent NRA board members and donors requesting information about a 2015 NRA delegation that went to Moscow at the invitation of Right to Bear Arms, Butina’s gun rights group.

One of the letter’s recipients was Pete Brownell, who in 2017 was elected the NRA’s board president, a position he held for a year. Brownell is the CEO of an Iowa-based gun supplier, a job he inherited from his father, Frank. The two men are among Grassley’s most prominent constituents, and since 1991, they have donated more than $23,000 combined to the senator’s reelection campaigns, according to FEC records. Brownell did not respond to a request for comment.

Grassley has authority over what Wyden releases into the public domain. His communications director, Michael Zona, said that, because the minority is leading the probe, he “can’t have a conflict of interest.” Zona added that the senator is “a strong advocate for transparency” and that “it’s highly unlikely Chairman Grassley would block a committee report that is based on a minority investigation that the ranking member would like to publish, as long as it’s fair and accurate.”

Keith Chu, a spokesman for Wyden’s office, said Grassley “has a distinguished record of investigating tax-exempt organizations,” and has thus far conducted himself in a fair and neutral manner. The chairman’s staff, he said, “has already demonstrated that they are taking this investigation seriously and Ranking Member Wyden hopes they are able to continue their bipartisan work into the future.”