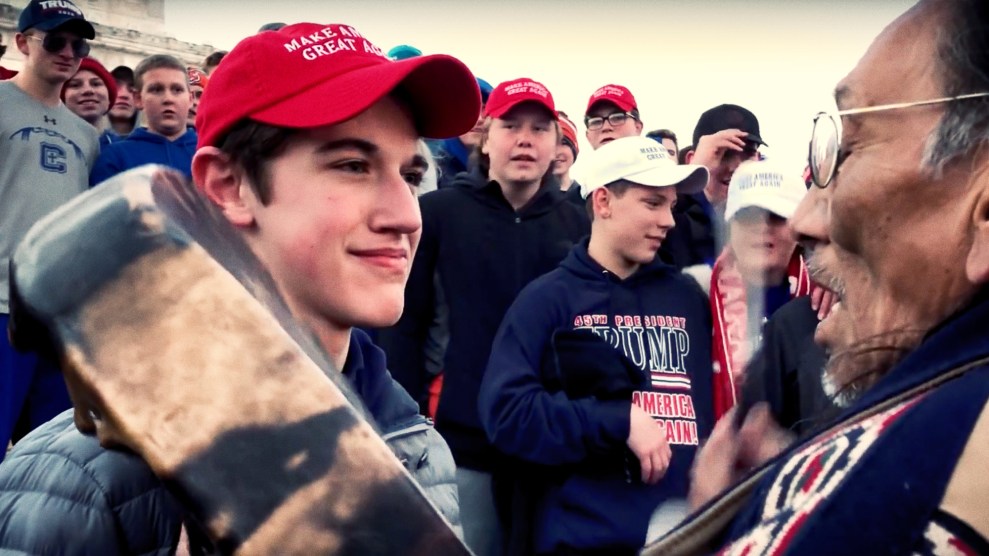 Just in: Statement of Nick Sandmann, Covington Catholic High School junior, about the event at the Lincoln Memorial: pic.twitter.com/PkuMh2cVZM

A video of a group of white teenagers taunting a Native American man at Friday’s Indigenous Peoples March in Washington, DC, sent shockwaves across social media as it went viral Saturday afternoon. The clip shows a young man wearing a “Make America Great Again” hat smirking at Nathan Phillips, an Omaha elder and Vietnam veteran, near the steps of the Lincoln Memorial.

The scene enraged those who saw the exchange as an example of the intolerance perpetuated by President Donald Trump. Rep. Deb Haaland (D-N.M.), one of the first two Native American women elected to Congress, called the actions of the MAGA hat-sporting students, who were in town for the anti-abortion March for Life rally, a “display of blatant hate, disrespect, and intolerance” that she blamed squarely on the president.

Conservative defenders, meanwhile, tried to blame the incident on Phillips, whom they say approached the teens first. Oklahoma senator and Trump ally James Lankford (R) said the teen was standing “awkwardly close” to the elder, but didn’t agree that the behavior measured up to harassment.

The smartest corners of the internet have been busy offering explanations for why the confrontation drew instant attention—and why it matters. Here’s a selection of the best analysis we’ve been reading so far:

Slate writer Ruth Graham locates the source of the moment’s disturbing virality in the legacy of white male privilege that has mocked, oppressed, and humiliated populations across American history. The current political moment, Graham says, surely played a role—after all, less than a week had passed since Trump used the 1890 Wounded Knee massacre to make fun of Sen. Elizabeth Warren, whom he often derisively refers to as “Pocahontas.” For Graham, the face of the MAGA hat-wearing teen is one that’s recognizable across other hate-inspired moments: “The face of self-satisfaction and certitude, of edginess expressed as cruelty.”

The face is in this photo of a clutch of white young men crowding around a single black man at a lunch counter sit-in in Virginia in the 1960s, and in many other images of jeering white men from that era. The face is the rows of Wisconsin high school boys flashing Nazi salutes in a prom picture last year. The face is Brett Kavanaugh—then a student at an all-boys Catholic prep school—“drunkenly laughing” as he allegedly held down Christine Blasey Ford. Anyone who knew the popular white boys in high school recognized it: the confident gaze, the eyes twinkling with menace, the smirk. The face of a boy who is not as smart as he thinks he is, but is exactly as powerful. The face that sneers, “What? I’m just standing here,” if you flinch or cry or lash out. The face knows that no matter how you react, it wins.

The Atlantic editor James Fallows also places the moment in historical context, comparing it to the intimidating faces of white young men who, in a famous 1957 photo, looked upon the black students integrating into Little Rock’s Central High School. Fallows dismisses the various arguments the teenagers’ defenders put forth, arguing that the only takeaway that matters is the enduring tableau of intimidation:

Whatever happened just before or after the three or four minutes most widely circulated on yesterday’s videos, those three or four minutes convey a reality that seems impossible to deny. For a sustained period, a large group of young men, who had chosen by their apparel to identify themselves with a political movement (and a movement whose leader uses “Pocahontas” as an epithet and recently made a “joking” reference to the massacre at Wounded Knee), act mockingly to a man their grandfathers’ age, who by his apparel and activities represents a racial-minority, indigenous-American group.

And finally, Rolling Stone‘s Peter Wade offers insight as to why it appears Phillips might have approached the young men in the first place: Phillips says he was trying to stop them from taunting a group of Black Hebrews who were protesting the president at the Lincoln Memorial. Wade, citing an interview Phillips did with the Indian Country Times, presents an indigenous perspective on how to combat hate in the Trump era:

“…this is the commitment when I picked up the pipe 27 years ago. It’s for the next generation. It’s when that moment comes and you got to stand your ground. That commitment that you made to either fulfill that or you don’t. I mean, I was scared and I didn’t want to. I really, I really didn’t want to, but nobody else was,” Phillips said, adding, “We’re indigenous. We’re different than that. When we see our youth going the wrong way, we will go up and say, ‘You are doing the wrong thing there nephew, or grandson. This is just the wrong way.’ I tell them, ‘This is the way you have to behave. This wrong, this is right.’”