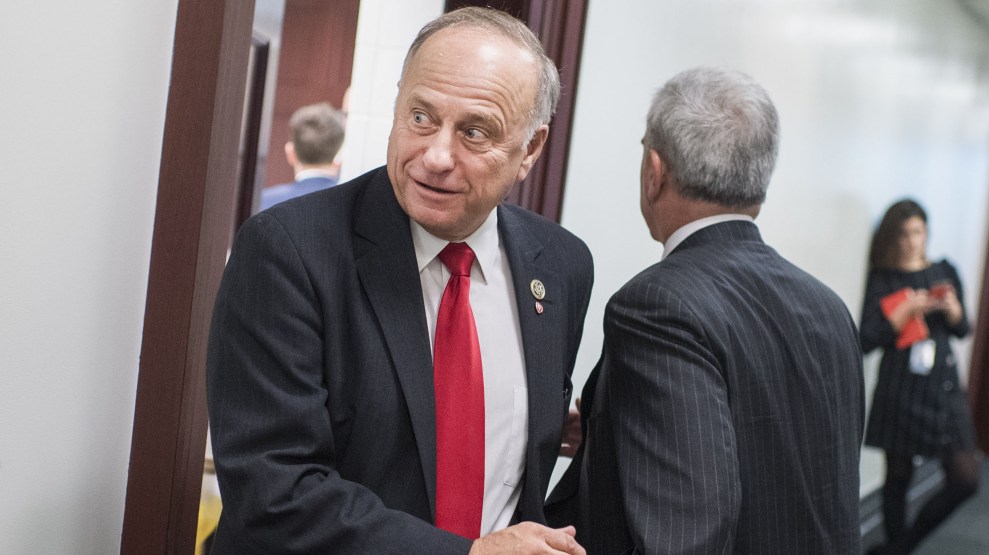 Rep. Steve King, R-Iowa, leaves a meeting of the House Republican Conference in the Capitol on November 28, 2018. Tom Williams/Congressional Quarterly/Newscom via ZUMA

For years, Republican Rep. Steve King of Iowa has made racist comments with little censure from his own party. But after he questioned why terms like “white nationalist” and “white supremacist” are considered derogatory in an interview with the New York Times published Thursday, several GOP leaders are acknowledging that the nine-term congressman has gone too far. A few are even calling for a primary challenge to King.

But most Republicans are stopping short of pushing for King to step aside. The reticence to do more than condemn a single remark is a signal of King’s continued relevance as the leader of the most conservative congressional district in Iowa—a state where every four years his support for a presidential candidate in the Republican primary makes him a political force few have been willing to cross. But GOP leaders’ reluctance to support a replacement for King also demonstrates the fundamental awkwardness of King’s place in the Republican Party: How do you condemn someone for crossing lines that President Donald Trump himself, an ally of King, also crosses?

The Republican with perhaps the strongest condemnation of King was former Florida Gov. Jeb Bush. “It’s not enough to condemn @SteveKingIA’s unconscionable, racist remarks,” Bush wrote on Twitter Friday. “Republican leaders must actively support a worthy primary opponent to defeat King, because he won’t have the decency to resign.”

Bob Vander Plaats, a conservative evangelical kingmaker in Iowa politics, joined this call on Saturday. “The recent comments by @SteveKingIA published in the @nytimes are a bridge too far,” he tweeted. “The good people of the 4th District of Iowa deserve better leadership that is representative of who they are.” Vander Plaats and King both served as co-chairs of Sen. Ted Cruz’s (R-Texas) presidential campaign in Iowa in 2016.

But the condemnation of others has fallen short of calling for King to leave Congress. Sen. Tim Scott (R-S.C.), the only African American Republican in the Senate, wrote an op-ed in the Washington Post attacking his own party for its track record of ignoring racist comments like King’s. “Some in our party wonder why Republicans are constantly accused of racism—it is because of our silence when things like this are said,” he wrote. But Scott ended his op-ed by expressing hope that King, who has professed racist beliefs for years, would change—not calling for him to leave Congress.

GOP leaders in the House were quick to condemn the remarks. And since Scott’s op-ed, as if on cue, more Republicans have come out to issue condemnations. On Saturday, Iowa’s two Republican senators denounced his comments. “I condemn Rep. Steve King’s comments on white supremacy; they are offensive and racist,” Joni Ernst tweeted. Chuck Grassley told Axios that the remark was “offensive.”

But neither went so far as to ask him to step down or endorse a primary challenger. And in the past, both have relied on his support in their own campaigns. On the eve of the 2018 elections, as King faced a surprisingly strong challenge from a Democrat, Grassley endorsed King. “Iowa needs Steve King in Congress,” Grassley said in his endorsement. “I also need Steve King in Congress.”

King’s latest comments were part of a long history of racist remarks, policies, and political activity. The few summarized by the Times are just a taste: “He made national headlines for endorsing a Toronto mayoral candidate with neo-Nazi ties and for meeting with a far-right Austrian party accused of trivializing the Holocaust.” He has a habit of retweeting white nationalists. In one of his most notorious comments, in 2013, King described young undocumented immigrants as drug mules coming across the southern border. “For everyone who’s a valedictorian, there’s another 100 out there who weigh 130 pounds—and they’ve got calves the size of cantaloupes—because they’re hauling 75 pounds of marijuana across the desert,” he said.

During the 2016 Republican National Convention, King alleged on MSNBC that non-whites had not meaningfully contributed to the world. “I’d ask you to go back through history and figure out, where are these contributions that have been made by these other categories of people that you’re talking about? Where did any other subgroup of people contribute to civilization?” Last year, he said he didn’t want Somali Muslims working at pork-packing plants in his district because they believe the people who eat it will go to hell. He has tweeted his agreement with far-right Hungarian Prime Minister Viktor Orban that “diversity is not our strength.” Shortly before his reelection last year, he told the far-right propaganda outlet Unzensuriert that Muslims and liberals “have teamed up against Western civilization.” Experts on far-right movements said the interview demonstrated King’s fluency in white nationalist talking points.

So it was no surprise when King made another racially controversial remark during his interview with the Times. “White nationalist, white supremacist, Western civilization—how did that language become offensive?” King said. “Why did I sit in classes teaching me about the merits of our history and our civilization?” King tried to clarify his remarks in a speech on the House floor on Friday. He defined himself as “simply an American nationalist” but did not apologize for his remarks.

King’s political importance in Iowa has long insulated him from censure among his party, though some Republicans have tried to keep him at arm’s length. Now, his close alignment with Trump continues to provide some safety. As the Times story lays out, King was calling for a border wall and attacking immigrants as criminals and drug smugglers long before Trump ran for president on the same message. He has forged alliances with right-wing nationalist leaders in other countries, including France’s Marine Le Pen. In 2017, he endorsed the Netherlands’ Geert Wilders, a virulently anti-Muslim politician, saying, “We can’t restore our civilization with somebody else’s babies.”

King’s time in Congress could come to an end after this term. His three-point victory in 2018 was his narrowest yet, and it came after a few companies, under pressure from anti-racist activists and Jewish groups, promised to stop funding him. Already, he has drawn a serious Republican primary challenger for 2020, state Sen. Randy Feenstra. But if he’s ousted, it appears likely to be in spite of the stance of most leading Republicans, not because of it.