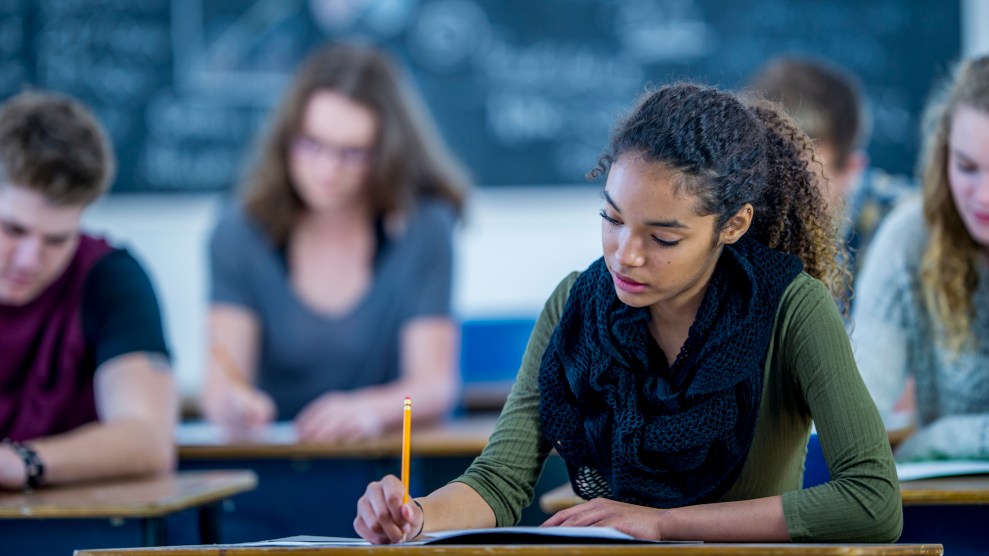 The sticker price of college is increasing, but for low-income students, financial aid programs can make some of the most competitive schools the most affordable. Yet the maze of application forms and fees dissuades many high-achieving, low-income students from applying at all. Studies have found as many as 40 percent of incoming students do not attend the most competitive school they could get into, and that this “undermatching” phenomenon is driven by students’ application choices rather than schools’ admissions decisions.

A new working paper suggests that removing those barriers with a promise of financial aid can significantly increase the number of low-income students who apply to and enroll in a selective college. Researchers at the University of Michigan designed an experiment to see how a relatively low-cost intervention could affect where high-school seniors went to college. The school sent personalized mailers to high-achieving, low-income students, their parents, and their principals, telling them that if the students got into UM they’d get full tuition because they qualified for a High Achieving Involved Leader Scholarship.

Of the students who received the letters, 67 percent applied to UM—more than twice the rate of the control group, made up of similar students who only got a postcard informing them of the school’s application deadlines. The group that heard about the scholarship was also twice as likely to enroll at UM; 27 percent of them did.

The mailer’s effect stunned the researchers, led by Susan Dynarski, a professor of public policy. Past research suggested that the most effective ways to change a student’s college decisions required “boots on the ground” involvement, like one-on-one mentoring, Dynarski says. The scholarship letters, in contrast, cost less than $10 each. While many colleges, including prestigious state schools and Ivy League schools, send out information on financial aid to students with high test scores, Dynarski says the scholarship letter’s explicit promise of a full tuition was a new approach. “The effects were enormous, and we didn’t expect that at all. With a study like this, you have some hypothesis about how big the effects will be and you think it’ll take a few years to detect. But within one year, the effect was enormous,” she says.

Beyond the low cost of producing and mailing the letters, Dynarski notes, the program did not require any additional spending. The students who applied through the scholarship likely would have been able to attend UM without paying out of pocket, even without the pre-admissions commitment to cover their tuitions. Ninety percent of students with similar financial and academic profiles at the university are on full-tuition scholarships.

The study also found that the high school seniors who ended up at UM were not poached from other competitive four-year colleges. Instead, the students who were not contacted went to less selective colleges, community colleges, or did not pursue higher education at all.

Dynarski cautions that the study’s takeaway is not as simple as “outreach and information make a difference,” but rather that the school committed to offering qualified students a full scholarship that depends only on admission and not additional financial aid forms. Her coauthor, Syracuse University professor Katherine Michelmore, said that while other schools send similar recruitment letters that provide information on scholarships, none are explicit guarantees to students who still might question whether they could afford to attend. “Our letters were personalized, so they think this isn’t just spam. This is us, reaching out to you specifically, convincing the students that this was a real promise,” Michelmore explains.

Dynarski said she hopes to replicate the study in other settings, and noted that both public and private schools could successfully recruit more promising low-income students with an outreach program like UM’s.