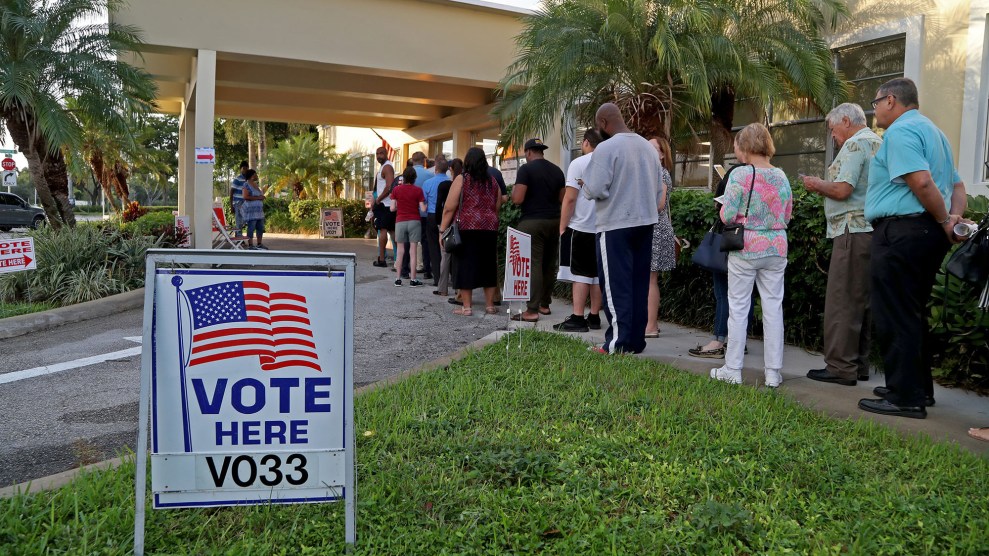 Voters in Hollywood, Florida, line up to vote on Election Day 2018. Susan Stocker/Sun Sentinel/TNS via ZUMA

A month after Florida voters approved a measure to restore the franchise to about 1.4 million former felons—the largest expansion of voting rights in decades—a battle over implementing that change is already beginning.

The state’s Republican elections chief is resisting swift implementation of the measure, which was approved by nearly 65 percent of Florida voters on November 6 and is scheduled to take effect on January 8. He’s asking the state Legislature, dominated by Republicans, to interpret the ballot initiative. As a result, the dismantling of one of the harshest disenfranchisement schemes in the country could be subject to delays, confusion, and lawsuits.

To those who crafted Amendment 4, the ballot language was straightforward. It read, “This amendment restores the voting rights of Floridians with felony convictions after they complete all terms of their sentence including parole or probation.” It stipulated an exception for people convicted of murder or a sexual offense.

“On January 8, anybody who has completed the terms of their sentence for an offense other than murder or felony sexual assault had their rights restored by the voters on Election Day,” said Howard Simon, who as director of the Florida ACLU helped craft and shepherd Amendment 4 to passage. But Simon, who retired last week after 21 years leading the Florida ACLU, predicted that there might be trouble ahead. “I’m not naive,” he said in an interview with Mother Jones on the day he stepped down. He predicted that the state Legislature, which does not convene until March 5, might try to muddy the waters. Legislation could bog down rights restoration or sow enough confusion that some ex-felons are deterred from registering.

This week, the first signs of obstruction arose. The secretary of state, Republican Ken Detzner, told the media on Tuesday that he believes the ballot language is unclear and, rather than give guidance to the elections supervisors, he wants the state Legislature to weigh in. “We need to get some direction from them as far as implementation and definitions—all the kind of things that the supervisors were asking,” he said. “It would be inappropriate for us to charge off without direction from them.”

Before the Legislature potentially steps in, implementation of the initiative will get its first test at the county level, where supervisors of elections, who run voter registration in each of Florida’s 67 counties, will make decisions about how to enact the measure. Some elections supervisors, who met in Sarasota this week for their mid-winter conference, have voiced frustration at the lack of guidance from Detzner, as the Tampa Bay Times reported:

“They wouldn’t give any direction to us, and they didn’t provide a timeline,” said Polk County elections chief Lori Edwards.

Some counties say they will allow former felons to begin registering on January 8, but others may not. That could lead to lawsuits over the disparities in people’s voting rights based on the county where they live. Michael McDonald, a University of Florida professor and an expert in elections, predicted Tuesday that Detzner’s “resisting implementation of the restoration of felons voting rights…is going to lead to costly litigation for the state, with voters footing the bill.”

State Sen. Dennis Baxley, the Republican who will lead the committee with jurisdiction over the issue, has been noncommittal on whether legislation is needed to implement the sweeping rights restoration passed by the voters. “How do you evaluate eligibility?” Baxley told the Tampa Bay Times. “I still have some questions…What were the terms of their sentence? Do they have to meet probation? Did they complete their debt to society or not?”

To Simon of the ACLU, the answers to those questions are obvious. The terms of a sentence are whatever the judge ordered, including any time in prison or on probation and any payment of restitution to victims. In Florida, the state Supreme Court approves initiative language before amendments can appear on the ballot. The court unanimously approved the Amendment 4 language in April 2017 as clear and specific. “The title and summary would reasonably lead voters to understand that the chief purpose of the amendment is to automatically restore voting rights to felony offenders, except those convicted of murder or felony sexual offenses, upon completion of all terms of their sentence,” Justice Fred Lewis wrote in his opinion.

Amendment 4 replaced a system of mass felon disenfranchisement in effect since the earliest years of Jim Crow. After the Civil War, Florida reluctantly granted African Americans the franchise as a condition for rejoining the union. But it inscribed in its new state constitution an expansion of felon disenfranchisement aimed at taking away the voting rights of newly freed slaves. Anyone convicted of a felony in Florida had his voting rights permanently revoked. At the same time, the state expanded the number of crimes that would count as felonies and created a system of county criminal courts intended to convict African Americans of crimes such as “larceny, malicious mischief, vagrancy, and ‘all offences against Religion, Chastity, Morality, and Decency.'” During Reconstruction, black men accounted for 90 percent of Florida’s new prison population.

Ex-felons could get their right to vote back, but they had to go through a bizarre process that involved individually petitioning the governor and his cabinet for clemency. There was no established standard for governors to approve these requests, so people’s right to vote was at the mercy of their whims. (In 2018, a federal judge found the process unconstitutional, but it remains in place as the 11th Circuit Court of Appeals determines whether to keep it in place for people convicted of murder or sexual offenses who are not covered by Amendment 4.)

More than 100 years after Reconstruction, the tough-on-crime policies of the 1980s and 1990s caused Florida’s prison population to explode, with a disproportionate impact on African Americans. By the time voters approved Amendment 4, 1.5 million Floridians—including 20 percent of voting-age African Americans—were disenfranchised.

The voters “took control of the constitution and went over the heads of the politicians and finally addressed this lingering problem in Florida,” Simon said. Amendment 4’s language “is self-enforcing, it is automatic, it says that voting rights shall be restored, that the disqualification from voting shall end. I mean, I don’t know what part of that is unclear at all. So I don’t think it needs legislation.”