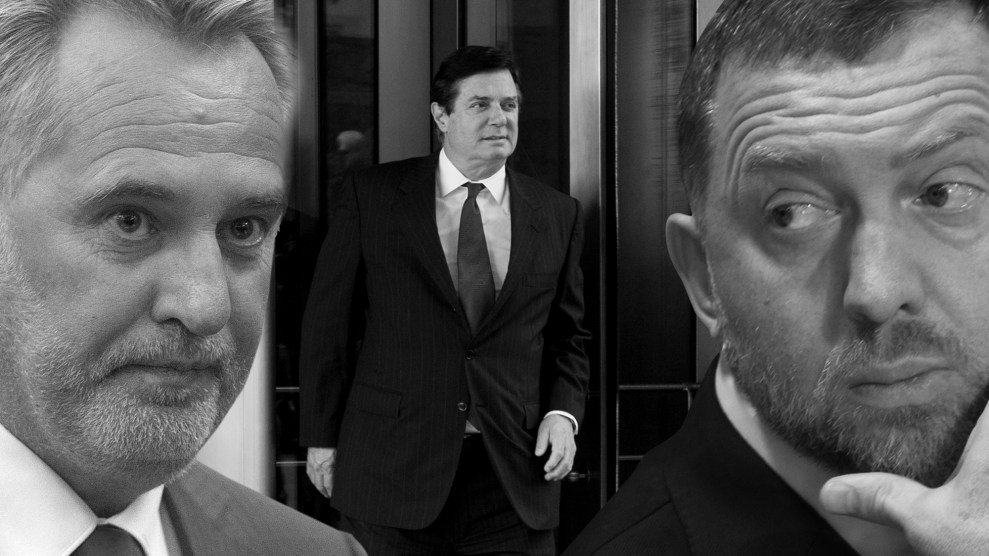 When the news broke that special counsel Robert Mueller was ending Paul Manafort’s plea deal—because the former Trump campaign manager, according to prosecutors, had repeatedly lied to them during his supposed cooperation—President Donald Trump and his champions had reason to cheer. This seemed to mean that Manafort, who pleaded guilty to multiple felonies, would no longer be providing Mueller and his team with information. In response to the collapse of the Manafort deal, Trump rage-tweeted about Mueller and claimed that “heroes will come of this”—possibly referring to Manafort. (He also said a pardon for Manafort was not “off the table.”) But there were others beyond Trump and his fans who may have had cause for welcoming the end of Manafort’s agreement with Mueller—namely, two oligarchs with whom Manafort has done or talked business.

When Manafort first cut his deal to tell all to Mueller’s squad in return for a lesser sentence, federal prosecutors, according to a Manafort associate, expressed interest in what he could share with them not just about the Trump campaign and related matters but about a pair of oligarchs who have been investigated or sanctioned by US agencies: Russian Oleg Deripaska and Ukrainian Dmytro Firtash. And when Rick Gates, Manafort’s former business partner who was deputy campaign manager for the Trump presidential effort, arranged his cooperation agreement with Mueller’s office, he, too, was questioned about these two men. Neither Manafort’s spokesman nor Gates’ lawyer responded to a request for comment.

Deripaska, an aluminum magnate who has been cited as a close ally of Russian leader Vladimir Putin, does not face any public criminal charges in the United States, but he was sanctioned in April by the Treasury Department and accused of using his businesses as an arm of the Russian state. He and Manafort go way back. In the mid-2000s, according to the AP, Manafort did secret work for Deripaska that he told the oligarch would benefit Russian leader Vladimir Putin. The news service last year reported that Manafort “proposed in a confidential strategy plan…that he would influence politics, business dealings and news coverage inside the United States, Europe and the former Soviet republics to benefit the Putin government.” In 2006, Manafort signed a $10 million annual contract for the project. (Deripaska brought a defamation lawsuit against the AP in US federal court over this article—and lost.)

Throughout this period, Manafort maintained a business relationship with Deripaska that eventually led to an apparent falling out. The billionaire handed Manafort nearly $19 million to invest in a Ukrainian TV venture called Black Sea Cable, according to legal filings submitted in the Cayman Islands by Deripaska’s representatives in 2014. Yet, Deripaska claimed, Manafort and his associates, after taking his money, stopped responding to Deripaska’s queries about the fate of the funds. In essence, Deripaska was accusing Manafort of absconding with millions.

During the 2016 race, Manafort seemed to try to use his position with the Trump campaign to work out his differences with Deripaska. After he was named the campaign’s chief strategist, Manafort sent an email to Konstantin Kilimnik, a business partner and former Russian intelligence officer, and asked, “How do we use to get whole?” And in an apparent reference to Deripaska, Manafort later wrote Kilimnik, “If he needs private briefings we can accommodate.” In another email exchange, Kilimnik told Manafort that he had “several important messages” from a person who seems to be Deripaska.

Working with and for an oligarch once banned from entering the United States and who now is sanctioned, owing him money, being sued by him, offering him inside info on the Trump campaign—Manafort appears to have had a complicated relationship with Deripaska. Surely, anyone investigating contacts between the Trump campaign and Russia would want to dig into this connection. Moreover, if the feds are interested in Deripaska’s past or present activities, Manafort might be a productive source for them.

Federal prosecutors also believed Manafort could be a source of information on Dmytro Firtash. Last year, the Justice Department identified Firtash, a Putin-connected Ukrainian natural gas magnate, as an “upper-echelon [associate] of Russian organized crime.” (In 2008, Firtash told the US ambassador in Kiev that years earlier he had to get the approval of Semion Mogilevich, an alleged Russian mobster, for his initial business endeavors—but denied having a close relationship with Mogilevich.) Firtash now faces federal charges in Chicago for allegedly bribing Indian government officials to secure a contract for selling titanium to Boeing. He is currently in Austria fighting extradition to the United States. The matter is before the Austrian Supreme Court, and Firtash, “could face extradition in a short time frame” if the court rules against him, his legal team said in a court filing last month.

Manafort is not implicated in Firtash’s current legal troubles. But a decade ago, he discussed with him an $850 million project to redevelop New York’s Drake Hotel—a venture that was to be partly financed by Deripaska. And in a federal lawsuit filed in 2011—and amended and expanded later—Yulia Tymoshenko, the former prime minister of Ukraine, charged that Firtash and Manafort had met to discuss a proposal for the oligarch to invest $100 million in a global real estate fund. As part of that deal, the lawsuit alleged, Firtash would pay a $1.5 million fee to a firm owned by Manafort and a real estate executive who had once worked for the Trump Organization. “Manafort gave Firtash the opportunity to expand the scope of his money laundering activities into the United States,” the suit claimed. But the case was dismissed in 2015 on jurisdictional grounds—and no evidence of a Firtash-Manafort money laundering scheme ever was produced. The Drake Hotel project never materialized, and there were no public indications that Firtash went ahead with Manafort’s global real estate fund.

Lanny Davis, an attorney for Firtash, says that Firtash did talk to Manafort about real estate investments: He “listened and said no” to Manafort. Firtash, according to Davis, has no concerns about Manafort providing information about him to the feds. (Kenneth McCallion, the American lawyer who filed Tymoshenko’s lawsuit, tells Mother Jones that FBI agents working with Muller’s investigation have repeatedly asked him for information related to allegations in that dismissed case and that he has provided them with material.)

Manafort possibly had another link—or at least an overlapping interest—with Firtash, who made billions as a middleman for Gazprom, the Russian natural gas giant. Firtash reportedly made donations to pro-Russian politicians in Ukraine, including former Ukrainian President Viktor Yanukovych, who Manafort served as an adviser. Manafort made millions of dollars consulting for Yanukovych, a corrupt pol who fled Ukraine in 2014 and yielded the presidency.

Mueller says that Manafort was paid for his political work in Ukraine in part by oligarchs through offshore companies set up in Cyprus and elsewhere. The scheme led to Manafort’s conviction for tax evasion and his guilty plea to money laundering charges. There is no evidence that Firtash was among the oligarchs who paid Manafort. But Gates disclosed during Manafort’s August trial in Virginia that he and Manafort received payments from Serhiy Lyovochkin, who was Yanukovych’s former chief of staff and an occasional business partner of Firtash. Gates said that at Manafort’s behest he forged paperwork to pretend the payment from Lyovochkin was a loan, a step to dodge US taxes.

Lyovochkin has drawn attention from Mueller for another matter. In August, Sam Patten, a longtime Manafort associate, pleaded guilty to acting as an unregistered foreign agent for Ukraine, and he agreed to cooperate with Mueller. As part of his plea deal, Patten admitted that he arranged for an unnamed straw donor to pay $50,000 to Trump’s 2017 inauguration on behalf of a Ukrainian official. The description of the official, unnamed in court papers, matches that of Lyovochkin. The website of Lyovochkin’s party says he attended Trump’s inauguration.

Manafort might be in a position to say whether any Ukrainians were involved with donations to the inaugural committee or GOP campaigns.

So for years Manafort hobnobbed with controversial oligarchs who were on the radar screen of US law enforcement. It is not publicly known what information Manafort handed over to the feds before Mueller killed his plea deal. But prosecutors were interested in what he had to say about Deripaska and Firtash. Whether or not he spilled any important beans about them before his cooperation agreement blew up, Deripaska and Firtash—and maybe other players in Russia and Ukraine—probably ought to be relieved that Manafort is talking to Mueller no more.