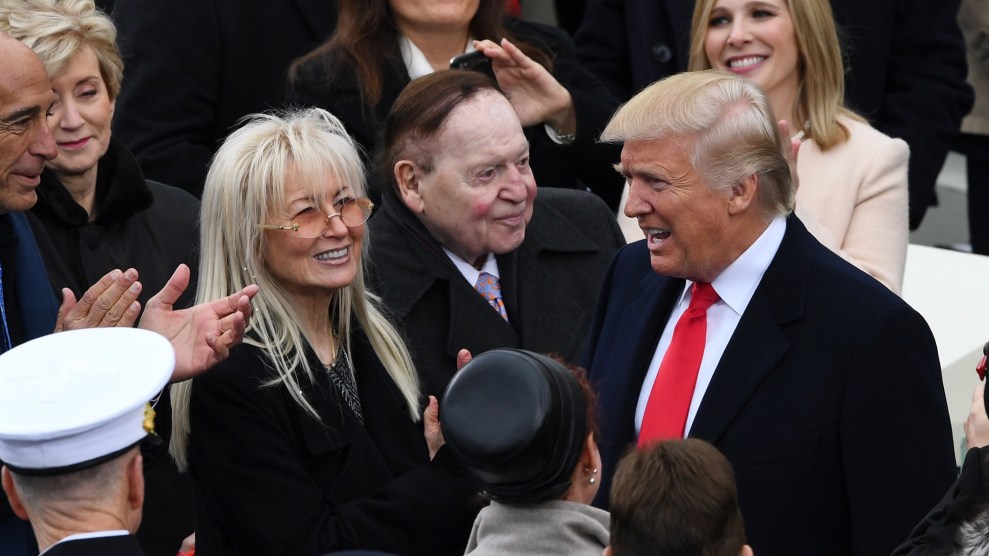 After spending hundreds of millions to oppose President Barack Obama, the Adelsons dropped at least $78 million to back Republicans during the 2016 election. Trump wasn’t Sheldon Adelson’s first pick for president, as this 2015 tweet reminds us:

Sheldon Adelson is looking to give big dollars to Rubio because he feels he can mold him into his perfect little puppet. I agree!

But the Adelsons eventually came around, pledging to spend heavily to elect Trump. (Miriam Adelson reportedly cried “tears of joy” when he was elected.) The couple recently spent more than $50 million on the midterm elections.

Since taking office, Trump has helped to personally promote Adelson’s business interests abroad. And he shares the Adelsons’ hardline pro-Israel stance. When the US Embassy in Israel was moved to Jerusalem in May, the Adelsons were in the front row for the opening ceremony.

After that controversial diplomatic shift, Miriam Adelson heaped praise on Trump in a front-page column in the Las Vegas Review-Journal—which she and her husband own: “Just over a year into his first term, he has re-enshrined the United States as the standard-bearer of moral clarity and courage in a world that too often feels adrift.” Next Friday, Trump will bestow her with the nation’s highest civilian honor.