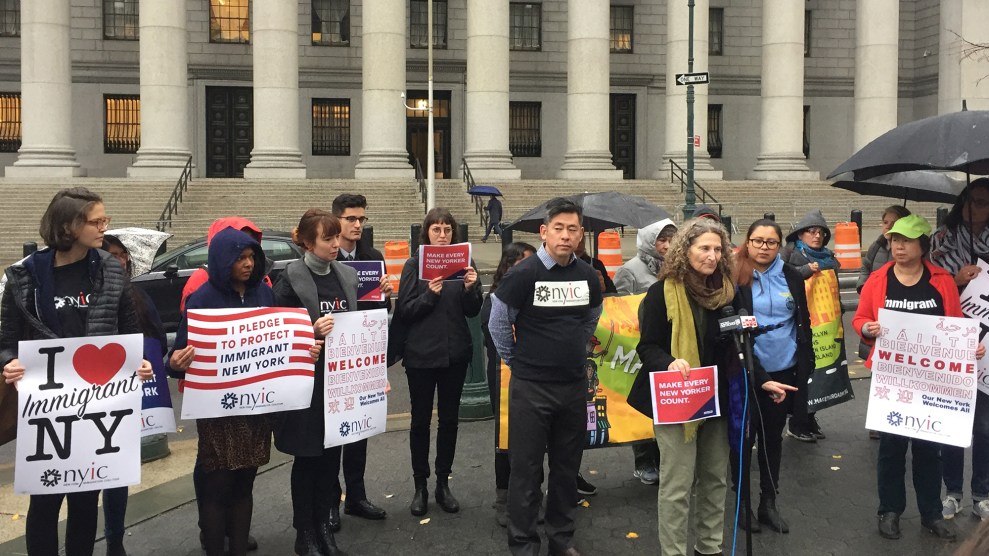 Civil rights supporters demonstrate outside the federal courthouse in New York City before a trial challenging the citizenship question on the 2020 census.Ari Berman/Mother Jones

A federal trial over a controversial question about US citizenship on the 2020 census began Monday under the cloud of a bombshell revelation by a former top Justice Department official that undercut the administration’s stated rationale for adding the question.

On the eve of the trial, which kicked off in New York on Monday morning, the plaintiffs suing the Trump administration over the question released a deposition from John Gore, the former Assistant Attorney General for Civil Rights in the Justice Department. Gore emerged at the center of the controversy after he drafted a memo to the Commerce Department in December 2017 requesting the citizenship question, which civil rights groups say will depress response rates among immigrants. Commerce Secretary Wilbur Ross, who oversees the Census Bureau, said he approved the citizenship question in March 2018 because the Justice Department needed it for “more effective enforcement” of the Voting Rights Act. He subsequently testified before Congress that the Justice Department had “initiated” the request.

However, in a deposition under oath released on Sunday night, Gore agreed with a lawyer for the ACLU, which is suing the administration along with 17 states, that the citizenship question was “not necessary” to enforce the Voting Rights Act. He said he was not aware of any voting rights case where the Justice Department had not succeeded because it lacked access to citizenship data on the census, and he confirmed that President Donald Trump’s Justice Department hadn’t filed a single case to enforce the Voting Rights Act.

Gore said that Ross had approached the Justice Department to request the addition of the citizenship question, not the other way around, as Ross has falsely claimed. Justice Department officials initially told Ross they did not want to request the question because the department was embroiled in controversy over the firing of James Comey, but an aide to Attorney General Jeff Sessions eventually told Ross’ chief of staff that Sessions was “eager to assist.”

The census has not asked respondents about their citizenship status since 1950. Civil rights groups say the citizenship question will depress response rates from immigrants, imperil the accuracy of the census, and shift political power to areas with fewer immigrants. The census determines how $675 billion in federal funding is allocated, how much representation states receive, and how political districts are drawn.

The Trump administration succeeded in getting the Supreme Court to block Ross’ deposition, but not Gore’s. New York Attorney General Barbara Underwood, who initiated the lawsuit against the administration, said at a press conference outside the courthouse on Monday that Gore’s deposition “seems to be consistent with what we have said and will prove at this trial: the argument that this was done to enforce the Voting Rights Act was not why the question was added…The purpose was not to enforce voting rights but to affect the count.”

In his deposition, Gore did not mention any conversations with Sessions about using the census to better enforce the Voting Rights Act. Instead, he said, they discussed how the census could be used for redistricting purposes and apportioning legislative seats, lending credence to fears that the administration’s true aim with the census is to shift political power to the GOP.

The trial over the citizenship question began Monday with expert testimony from Duke University political scientist Sunshine Hillygus, a member of the Census Bureau’s Scientific Advisory Commission and the first witness for the plaintiffs. Hillygus testified that “the citizenship question will depress participation among noncitizens and Hispanics.”

She cited research from the Census Bureau that found that the citizenship question could depress responses from noncitizens between 5.1 percent and 11.9 percent, an estimate she called conservative given the widespread fears among immigrant communities that the Trump administration will use the question to deport undocumented immigrants. A recent survey by the Census Bureau found that “the citizenship question may be a major barrier,” with a majority of respondents believing that “its purpose is to find undocumented immigrants.” Nearly 60 percent of those surveyed said they did not trust the federal government, and close to a quarter of respondents were “extremely concerned” or “very concerned” that their answers would be used against them.

If noncitizens do not respond to the census, areas with a high concentration of immigrants, like New York, California, and Texas, will receive less federal funding and fewer political seats.

“The citizenship question is going to make conducting the census a heck of a lot more difficult,” Hillygus testified. It “sticks out like a sore thumb.”

The trial is expected to last two weeks, with a decision soon after, although it’s likely to be appealed all the way up to the Supreme Court. In July, Judge Jesse Furman of the Southern District of New York ruled that the lawsuit against the Trump administration filed by New York and 16 other states challenging the citizenship question should go to a full trial. While noting Ross had “broad authority over the census,” Furman said his decision to add the citizenship question may have been “motivated at least in part by discriminatory animus and will result in a discriminatory effect.” He said the evidence strongly suggested Ross had acted “in bad faith” when he added the question.