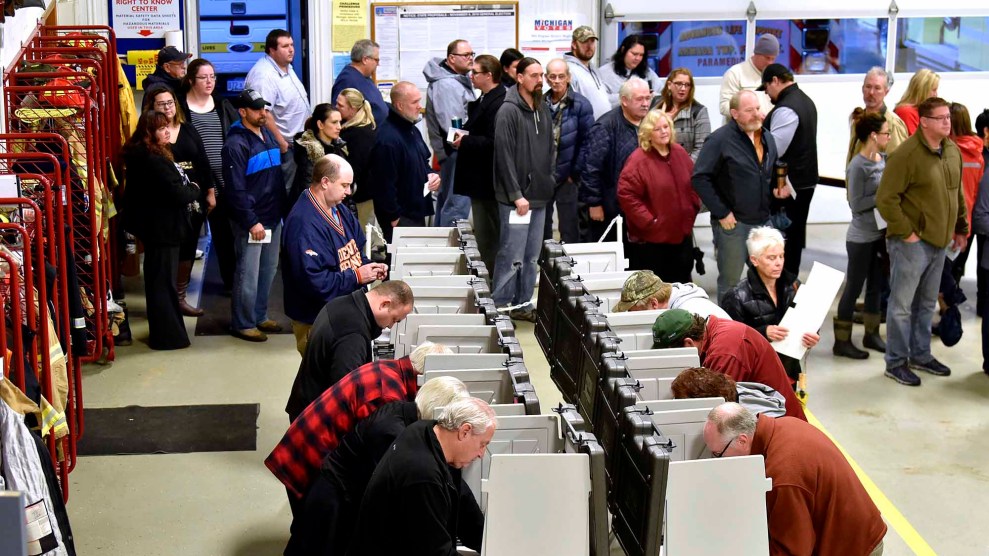 Voters in Michigan, one of the most gerrymandered states in the country, voted on Tuesday to create an independent redistricting commission.Todd McInturf/Detroit News/AP

The past two days have seen major victories in the battle against gerrymandering, which warps the political process by allowing politicians to choose their voters, rather than the other way around. But the Supreme Court, now with conservative Justice Brett Kavanaugh aboard, could undo this progress—and make it impossible to curtail congressional gerrymandering going forward.

On Tuesday, voters in three states passed ballot initiatives to combat gerrymandering by handing the job of drawing political maps to nonpartisan commissions. Colorado, Missouri, and Michigan voted overwhelmingly to end partisan gerrymandering by taking the map-drawing power away from the state legislatures. In Utah, a ballot measure to create an independent redistricting commission leads as the votes continue to be counted.

On Wednesday, gerrymandering suffered another blow. A panel of three federal judges struck down Maryland’s 6th Congressional District as an unconstitutional gerrymander. Maryland was led by Democrats when it redrew its maps after the 2010 census to bolster the party’s majority, at a time when Republicans had just taken over a majority of state governments and instituted extreme GOP-friendly gerrymanders. The case, along with one over North Carolina’s Republican gerrymander, will now be heard by the Supreme Court.

For years, opponents of gerrymandering have tried to persuade the nation’s highest court to limit gerrymandering on the basis of voters’ political affiliations. In the court’s last term, advocates, voters, and local lawmakers appealed numerous cases to the Supreme Court, hoping that swingJustice Anthony Kennedy would provide the key vote to overturn the country’s most extreme gerrymanders. But shortly before his retirement in June, Kennedy passed up the chance to rein in gerrymandering on three cases, all of which the Supreme Court sent back to lower courts. Now, with Kavanaugh in Kennedy’s seat, the Supreme Court is even less likely to curb gerrymandering. In fact, there’s a real possibility that it will undo not only Wednesday’s decision in Maryland, but also the progress made at the polls on Tuesday.

Voters expressed their frustration with gerrymandering by handing the map-drawing process to nonpartisan commissions, but the conservatives on the Supreme Court have shown a willingness to strike down such commissions as unconstitutional. If Kavanaugh, who’s expected to be a reliably conservative justice, agrees, he would provide a fifth vote to end most nonpartisan commissions, leaving voters no recourse to overcome extreme gerrymanders.

In 2015, Republican lawmakers in Arizona challenged the creation of an independent redistricting commission, which Arizona voters had approved as a ballot measure back in 2000. The lawmakers argued that the independent commission violated the US Constitution, which gives the state legislature the authority to set the “Times, Places and Manner of holding Elections for Senators and Representatives.” Kennedy joined the liberal justices in backing the commission. The majority opinion, written by Justice Ruth Bader Ginsburg, argued that the term “Legislature” in the Constitution should be widely interpreted to mean the legislative process, which in Arizona includes ballot initiatives.

But the court’s conservatives, led by Chief Justice John Roberts, vociferously dissented. Roberts argued that only the legislature could draw congressional districts. Now, he may have a fifth vote to overturn the Arizona case and invalidate all other congressional redistricting commissions created through ballot initiatives—including those passed this week. As election law expert Rick Hasen warned recently in a Harvard Law Review blog post, the conservatives on the court could go even further and interpret the Constitution as banning state courts from throwing out gerrymanders under their states’ constitutions, as happened in Pennsylvania this year.

Despite Democrats’ success in taking control of the House of Representatives this year, gerrymandering severely limited those gains. In North Carolina, for example, Democrats won 50.3 percent of the statewide vote, but they’ll control just three of the state’s 13 congressional seats.

Tuesday’s elections and Wednesday’s court decision show that both voters and judges are fed up with partisan gerrymandering. But the Supreme Court is leaning in the opposite direction, and the most extreme gerrymandering may be yet to come.