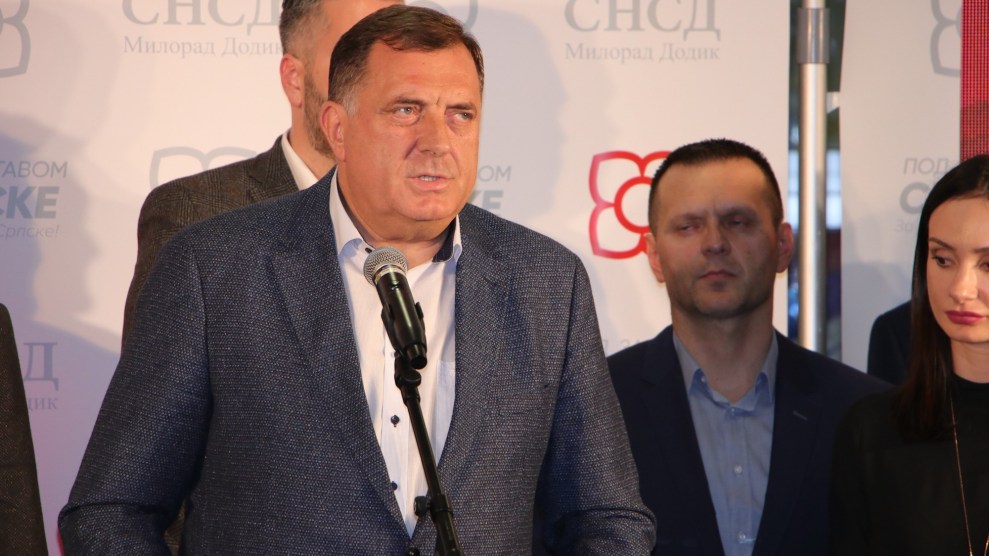 The US-sanctioned and virulently pro-Russian leader of an ethnic Serb region of Bosnia, Milorad Dodik, has a request for Serbs living in the United States: Vote Republican.

Dodik, who wants his semi-autonomous region, Republika Srpska, to secede from Bosnia and perhaps rejoin Serbia, sees an ally in President Donald Trump, who last month called himself a nationalist during a political rally in Texas.

“As US President Donald Trump said recently at the UN General Assembly, the US rejects the ideology of globalism and supports the doctrine of patriotism in the entire world,” Dodik said Monday, according to Bosnian news reports. “These are the values which we share as well.”

Dodik, according to a Reuters report, added that he had no doubt the Serbian diaspora would support Trump in the midterms, as well as in the 2020 presidential election.

Elected last month as the Bosnian Serb member of Bosnia’s three-member presidency, Dodik has said that a second term for Trump would give the Serbian enclave a chance to achieve “reintegration” into neighboring Serbia or to gain greater autonomy.

There are about 38,000 people in the United States who were born in Serbia and 200,000 who claim Serbian ancestry, according to the US Census Bureau. Voters from that group help form Dodik’s presumed target audience.  There is little indication many have been moved by his endorsement. But Dodik’s appeal highlights the extent to which far right and nationalist politicians in Europe see an ally in Trump.

Dodik’s calls for greater Bosnian Serb autonomy have escalated tensions in Bosnia. Since 1995 Bosnia has been governed under the Dayton Accords, which ended a three-year civil war and imposed a power-sharing agreement between ethic Bosnians, Croatians, and Serbs. The United States sanctioned Dodik in early 2017 for undermining the accords through calls for secession and other actions.

But Dodik has endeared himself to Russia, which has embraced his attempts to stop Bosnia from joining NATO, and regularly backs separatist movements in Eastern Europe. Russia allegedly backed an attempted coup in Montenegro, another former Yugoslavian state, in a bid to stop it from joining NATO. A Bosnian publication reported earlier this year that Russian intelligence helped train a paramilitary unit that acts as a security force for Dodik.

Dodik’s party, the Alliance of Independent Social Democrats, has aggressively courted Trump allies in Washington. Mother Jones reported in August that the party hired two former Trump campaign officials, Jason Osborne and Mike Rubino, to lobby for it in Washington. (Rubino switched jobs in August, joining the Health and Human Services Department as a political appointee.) Osborne runs a lobbying firm, Turnberry Solutions, that is located in a Capitol Hill townhouse where former Trump campaign manager Corey Lewandowski lives. Though the firm and Lewandowski deny a financial connection, Osborne calls Lewandowski a close friend. The two men and Rubino traveled together last April to Belgrade, Serbia, where they met with Serbian politicians. When the prime minister of Republika Srpska, Zeljka Cvijanovic, visited Washington in July, she posed for a picture with Lewandowski.

With help from Rubino and Osborne, Cvijanovic met with Rep. Dana Rohrabacher (R-Calif.), the notoriously Kremlin-friendly lawmaker, and with Sen. Roger Wicker (R-Miss.). Her office said she had also met “the closest associates of the US President Donald [Trump],” including Kellyanne Conway, Sarah Huckabee Sanders, and Lewandowski.

Cvijanovic also met with former White House aide Steve Bannon. Bannon, who was pushed out of the White House last year, hopes to set up a European foundation to assist right-wing populists.

Dodik has cheered Bannon’s effort. The Bosnian Serb leader said last month that he embraced Bannon’s belief that repressing ethnic politics “always causes a reaction, an uprising, and that people need to be allowed to have their own identity and for nations to have their own states, to cooperate, and not for some higher narrative to control everything.”