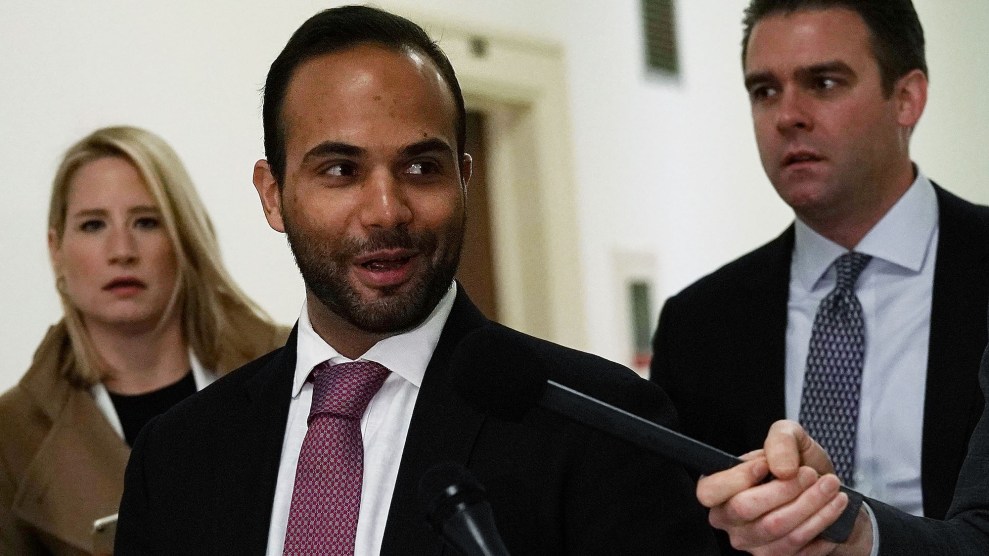 George Papadopoulos speaks to reporters before testifying at a closed House Judiciary and Oversight Committee on October 25, 2018.Alex Wong/Getty

President Donald Trump’s firing of Jeff Sessions has drawn widespread outcry, sparking concerns the president is angling to limit or shut down special counsel Robert Mueller’s investigation into ties between his presidential campaign and Russia. But the move has delighted figures involved in the Trump-Russia scandal Mueller is investigating.

“Great new Attorney General,” George Papadopoulos tweeted early Thursday morning, referring to Sessions’ former chief of staff, Matthew Whitaker, whom Trump has named acting head of the Justice Department and who will now oversee Mueller’s investigation. A former Trump campaign foreign policy adviser, Papadopoulos helped launch the FBI’s Russia investigation after he told an Australian diplomat over drinks in May 2016 that he had heard that Russia possessed thousands of emails stolen from Hillary Clinton. Papadopoulos was sentenced in September to two weeks in jail for lying to FBI agents about his contacts with suspected Russian agents during the campaign. Since his sentencing, Papadopoulos has mounted a media offensive, suggesting without evidence that the suspected Russian asset who cultivated him was, in fact, a Western intelligence agent staging a complex scheme to hurt Trump’s campaign.

Flynn Sr. was fired from his National Security Council post in February 2017 and subsequently pleaded guilty to lying to FBI agents about his contacts with former Russian Ambassador Sergey Kislyak. The elder Flynn has cooperated with Mueller for more than year, and his plea reportedly resulted in part from his concern prosecutors might file criminal charges against his son, who worked as an aide to his father. (Flynn Jr. has denied his own legal jeopardy influenced his father’s plea, and Flynn Sr. said in court that prosecutors had not used threats to compel his cooperation.)

Roger Stone, who appears to be a top target for Mueller, also celebrated the Justice Department shakeup. Whitaker “is a solid conservative, and by designating him as acting attorney general, the president took power away from the deputy attorney general, Rod Rosenstein,” he said in a video posted on the far-right site Infowars.

Whitaker’s promotion additionally drew applause from another Trump-Russia figure, Sam Clovis, who was Trump’s campaign co-chairman. Clovis told Talking Points Memo he and Whitaker are “very close friends, and I’m very happy for him.” Whitaker is “a strong and clear-pictured conservative, and I think he’d be a great supporter of the president of the United States,” Clovis noted. It was Clovis who hired Papadopolous and Carter Page, another campaign foreign policy aide who has come under scrutiny in the Russia probe. Clovis has been interviewed as part of Mueller’s investigation, and he has cooperated with congressional investigations examining Trump’s Russia ties.

Key congressional Democrats are already calling for Whitaker to recuse himself from overseeing the Mueller probe based on public comments he made before joining Sessions’ staff, in which he attacked the Mueller investigation. On Thursday, Rep. Adam Schiff (D-Calif.), the incoming chairman of the House Intelligence Committee, cited Whitaker’s friendship with Clovis as another reason why the new acting attorney general should not oversee Mueller’s work.

Acting AG Whitaker’s relationship with Sam Clovis, an important witness in the Russia probe, and his past prejudicial comments about the investigation warrant his recusal.

Congress must determine whether Whitaker made any promises to Trump about his recusal or impeding Mueller.