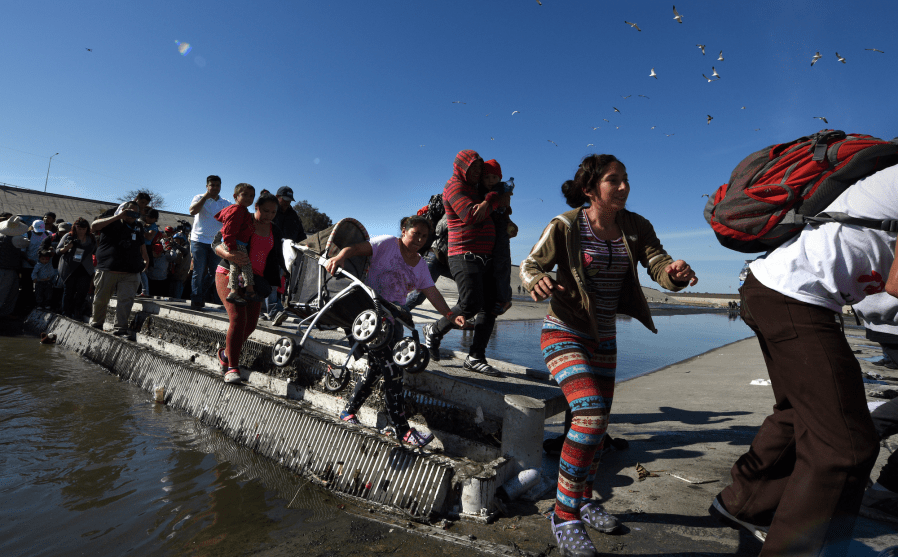 Migrant caravan from camp Centro Deportivo Benito Juarez marches to the Tijuana-San Diego border on November 25, 2018. They were met by a line of Mexican police in riot gear at the bridge but managed to run past them, climbing up steep walls, crossing the Rio Tijuana and difficult terrain, reaching the border but were met at times by tear gas from U.S. agents when they tried to climb over fence and were pleading to be let in. Carol Guzy/ZUMA

On Sunday, US authorities fired tear gas onto hundreds of migrants attempting to enter the United States, a chaotic scene that left scores of mothers and small children choking as they were violently pushed back from the US-Mexico border.

“I felt that my face was burning, and my baby fainted,” Cindy Milla, one of the migrants whom agents shot at on Sunday, told the Wall Street Journal. “I ran for my life and that of my children.”

But Milla’s account, one of the many harrowing stories that emerged as lawmakers and human rights advocates condemned the use of tear gas by Border Patrol agents, would apparently be news to Ron Colburn, the former deputy chief of US Border Patrol. Colburn, now the president of the Border Patrol Foundation, a group that honors the memory of fallen agents, appeared on Fox News Monday morning to defend the agents’ actions. He also claimed that the contents of tear gas were “natural” and safe for consumption.

“Absolutely,” Colburn responded when asked if the use of tear gas was warranted. “To clarify: The type of deterrent being used is OC pepper spray. It’s literally water, pepper, with a small amount of alcohol for evaporation purposes.”

He continued, “It’s natural. You can actually put it on your nachos and eat it. So, it’s a good way of deterring people without long-term harm.”

On Fox & Friends, Border Patrol Foundation president defends pepper spraying latinx migrants because “it’s natural. You could actually put it on your nachos and eat it.” pic.twitter.com/QLdQXqqNno

Colburn’s appearance came hours after Homeland Security Secretary Kirstjen Nielsen appeared to blame the “lawlessness” of migrants for forcing agents to use tear gas on them.

.@DHSgov will not tolerate this type of lawlessness & will not hesitate to shut down POEs for security reasons. We'll seek to prosecute to the fullest extent of the law anyone who destroys federal property, endangers our frontline operators, or violates our sovereignty.